Toyota's first foray into the American pickup truck market was the 1964 Stout; for 1969, a revised version was the called the Hi-Lux, the Japanese name for the Stout. Neither approached the sales of the Chevy S-10 or Ford Ranger; so, in 1995, Toyota launched a new model designed and built in the United States, named Tacoma (a native word for Mount Rainier). Bigger and more refined than the Hi-Lux, it became America’s best made, best selling compact pickup.

Over time, the Tacoma outgrew its compact-pickup roots and joined the midsize pickup class created by the late Dodge Dakota. When the 2020 Toyota Tacoma was launched, the Tacoma had been America’s best-selling mid-size pickup for 13 years in a row; that volume allowed Toyota to create 32 different configurations in six models (SR, SR5, TRD Sport, TRD Off-Road, TRD Pro, and Limited). Even the base SR comes with pre-collision alerts (including pedestrian detection), radar-based dynamic cruise control, lane departure alert, and automatic high beams. 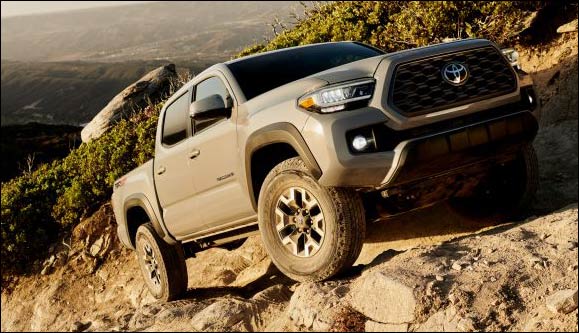 The Tacoma uses high-strength steel in the frame and hot-stamped, ultra-high strength steel in the body; the double wishbone coil-spring front suspension is paired with leaf-springs in back, with staggered outboard-mounted gas shocks. There are two engines, a base 2.7 liter dual-cam four-cylinder with variable valve timing rated at 159 horsepower and 180 pound-feet of torque. The better buy for most people is probably the 278-horse 3.5 liter V6, rated at 265 pound-feet of torque, which uses an Atkinson cycle for higher efficiency; it has the D-4S fuel injection system with both direct injection and port injectors. Transmissions are a six-speed manual (V6 only) and six-speed automatic; with the V6, it’s rated at 6,800 pounds of towing. 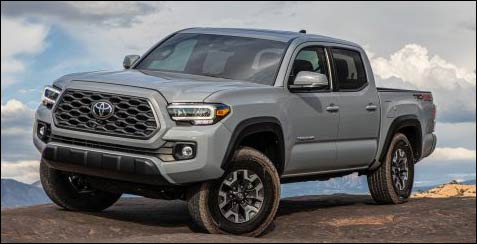 There are two cabs, Access Cab (two-door) and Double Cab (four-door); each is available in rear or four wheel drive. Access Cabs have under-seat rear storage with fold-up seat cushions; Double Cabs have 60/40 split rear seats with adjustable headrests and under-seat storage. The Access Cab has a 127.4 inch wheelbase and 73.7 inch bed, while Double Cab can have the same wheelbase with a 60.5 inch bed, or a 140.6 inch wheelbase with the same bed. The inner bed is made from sheet-molded composite (SMC); the tailgate has an easy-lowering feature that prevents it from slamming down. A factory-installed tri-fold hard tonneau is optional. The bed deck has two-tier loading and an integrated deck-rail utility system with four standard adjustable tie-down cleats. 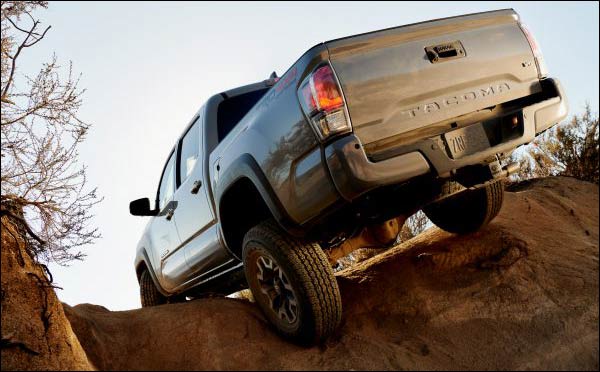 The TRD Off-Road has a locking rear differential, Hill Start Assist Control (HAC), clutch Start Cancel (manual transmission only), and crawl control, which has five low-speed settings to let the driver focus on challenging off-road terrain. The TRD Sport models has sport-tuned shocks; TRD Off-Road uses Bilstein shocks and has a Multi-Terrain Select system (automatic transmission only) which lets the driver match terrain types such as loose rock or mud and sand. The system adjusts the throttle and brake pressure.

The 2020 Tacoma is very similar to the 2019 under the skin, but with numerous improvements. Each model has its own grille, and the taillamps were redesigned. The center touch screen was enlarged (7” on SR, 8” otherwise) and has Apple CarPlay, Android Auto, and Amazon Alexa compatibility. The base SR added intermittent windshield wipers (at last) and an optional LED bed lamp; the SX upgrade package, launched in 2019, adds black-out features and 16-inch alloy wheels to the SR Access Cab. The SR5 added a 10-way power driver’s seat with adjustable lumbar support when buyers get the V6, and the wheels move to dark gray.

The cast-aluminum 16-inch wheels are 4.188 pounds lighter (each) than on the 2019s; the TRD Pro has tweaked shock and spring tuning to complement the lighter new wheels for better off-road ride and handling. The Panoramic View Monitor (PVM) + Multi Terrain Monitor (MTM) lets the driver can select front, side, or rear views for nearly 360-degree visibility. A 5-second front undercarriage projected-path video playback can help the driver avoid potential unseen obstacles. 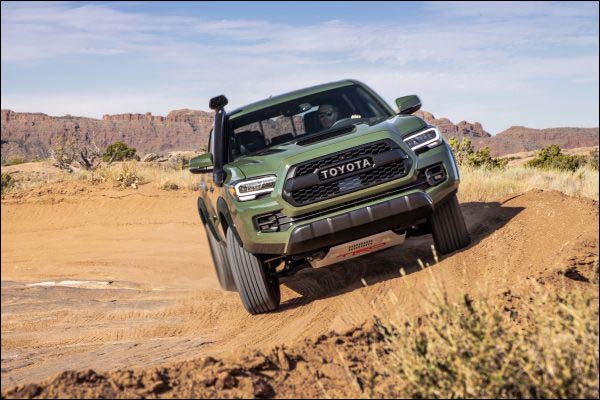 The TRD Pro uses a desert air intake which raise the air intake out of the dust and into cleaner air. The Pro also has a bold grille, color-keyed surround, blacked-out hood scoop and graphic, color-keyed power outside mirrors with turn signal indicators, color-keyed door handles, black overfenders, and color-keyed rear bumper; it's available in metallic black or gray, white, and Army Green. The Pro is only available in Double Cab form, but buyers can choose the manual or automatic transmission. It includes, in addition to previously mentioned items, Fox 2.5 inch internal bypass shocks, a 1-inch lift, special front and rear springs (leaf springs are progressive rate), a front skid plate, Kevlar-reinforced Goodyear Wrangler tires, and a 4.2 inch digital gauge with inclinometer and tilt.

Every Tacoma has active head restraints for the front, driver and front passenger knee airbags, and front and rear roll-sensing side curtain airbags, in addition to the usual airbags and safety items.

2021 Tacoma Trail Edition, based on the SR5 Double Cab with a choice or two or four wheel drive, comes in Army Green, Cement, Midnight Black, or Super White; around 7,000 will be made this way for 2021, with black badges and all-weather floor liners. The 2021 Tacoma Trail has gray 18-inch TRD Off-Road wheels with Kevlar all-terrain tires, and the grille from the Tacoma Limited, along with a 115-volt power outlet in the bed and lockable bed storage with insulation on the driver side to double as a cooler.

base 2.7 liter dual-cam four-cylinder with variable valve timing rated at 159 horsepower and 180 pound-feet of torque. The better buy for most people is probably the 278-horse 3.5 liter V6, rated at 265 pound-feet of torque, which uses an Atkinson cycle for higher efficiency; it has the D-4S fuel injection system with both direct injection and port injectors. Transmissions are a six-speed manual (V6 only) and six-speed automatic; with the V6, it’s rated at 6,800 pounds of towing.