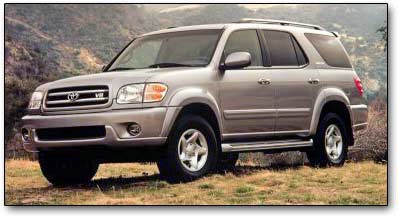 Toyota's first Sequoia rolled off the line on September 28, 2000. Toyota Motor Manufacturing, Indiana (TMMI) is the exclusive manufacturer of the Sequoia, with capacity to produce 150,000 units (of both Tundra and Sequoia) each year (this was increased in 2003 to 300,000 vehicles per year, including the Sienna).

The next-generation 2008 Sequoia is coming. The new Sequoia will take advantage of all Tacoma upgrades, and will also reportedly feature a new independent rear suspension. Interior space should increase as well.

The first Sequoias were sold in late 2000 as 2001 models; they shared the Tundra platform and V8 powertrain. Significantly larger and roomier than the Land Cruiser, Sequoia was powered by a 240 horsepower V8 with 315 pounds of torque, the first Toyota truck engine to be EPA-certified as ultra-low-emission; it produces 40 percent fewer non-methane organic gases (NMOG) than the Ford Expedition's 2000 LEV V8 engine.

Sequoia's overall length, width, height and wheelbase ---as well as its interior volume dimensions--- were larger than the 2000 Chevrolet Tahoe and nearly identical to those of 2000 Ford Expedition. Its third seat and rear cargo area were more spacious than both. Its ground clearance---at more than 11 inches--- was significantly higher than both.

Sequoia had an independent double-wishbone-type front suspension nearly identical to that of Tundra. The rear suspension, revised for increased ride comfort and excellent control, featured a five link live axle with coil springs. A four-wheel disc anti-lock brake system was standard on all models. The interior had room for eight passengers in three rows, with curtain-shield side airbags and three-way seat belts at each passenger position. Stability control (VSC) and four wheel drive were optional. 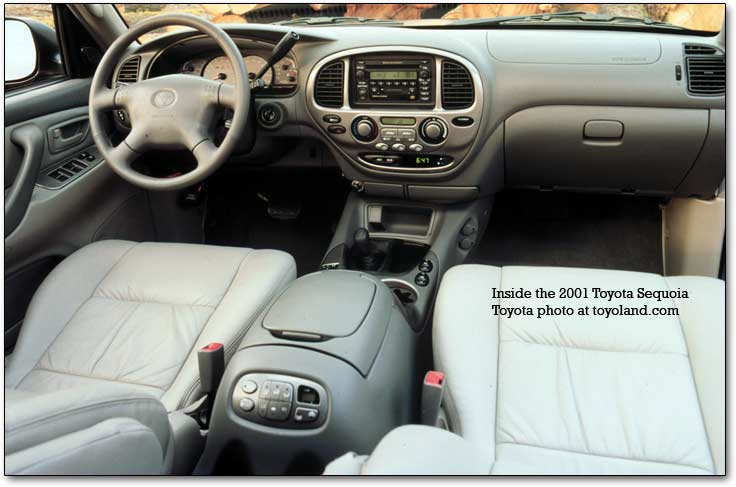 In 2004, the Sequoia gained a minor facelift, as well as an engine boost (to 273 hp) thanks to variable valve technology with lift control; the original four speed automatic was replaced by a five speed automatic, and gauges were now backlit by LEDs. The next version is due in 2008.

Dana also supplies the frames and driveshafts for the Toyota Tacoma pick-up.