The Toyota Land Cruiser was started as a copy of the go-everywhere Willys Jeep. Originally named the Model BJ and built to order, it was the first vehicle to reach the sixth station of Mount Fuji in 1951. 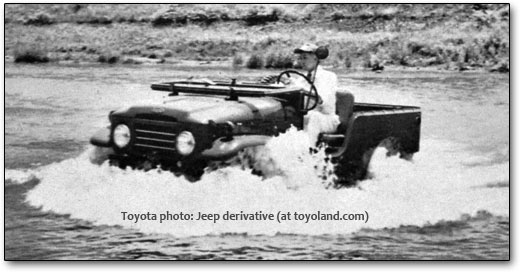 The BJ was renamed Land Cruiser in 1954, when it was first mass-produced. A single year later, its original 85 horsepower diesel was replaced by a 125 horsepower 3.8 liter gas engine.  A diesel version, usually around 3 liters, would be sold in Japan-specification Land Cruisers for many years.

The Land Cruiser was brought to the United States as early as 1958, and was the top-selling Toyota there from 1961 to 1965, selling in soft-top, open, and pickup versions.  Unlike other Toyota models, the Land Cruiser has been changed on an infrequent schedule.

In 1965, the familiar five-door station wagon version appeared; it would become the only Land Cruiser sold in the US after 1980. With 135 (gross) horsepower coming from its 274-cube straight-six engine and a top speed of a little over 70 mph, the Land Cruiser was actually considered fast and powerful for an off-road vehicle, in an era when Jeeps still had four cylinders. This generation was, incidentally, the inspiration for the FJ Cruiser. 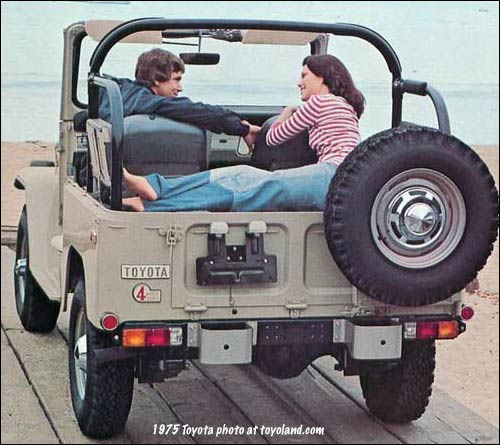 A generous ground clearance of eight and a half inches helped when off-road. Semi-elliptical leaf springs were used with conventional shock absorbers in front and back, with a sway bar in the rear as well; contemporary reviewers found it to be stable and well-balanced. The axle ratio was 4.11, with a 3.70 option; the two-speed part-time transfer case had a 2.31 low range, and could be taken apart with five bolts. Four wheel drive was controlled by levers on the dash. The price was around $3,500; 0-60 came in around 22 seconds, while braking from 60 mph took around 165 feet. 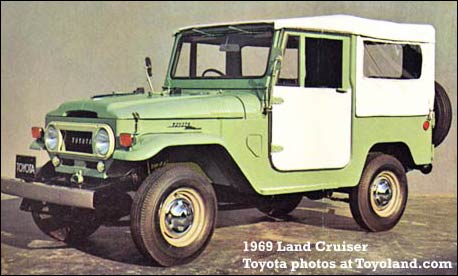 The station wagon’s wheelbase was 106.3 inches, and weight was far higher, at 4,130 pounds; headroom was just 36.5 inches, so it wasn’t exactly designed for hat-wearing basketball players. The length was a far greater 184 inches, making it the second-longest Toyota sold in North America, just 0.6 inches shorter than the Crown wagon. The wagon was three inches wider than the soft top, but both were powered by a six-cylinder engine generation 145 gross horsepower at 4,000 rpm, with 217 pound-feet of torque peaking at a low 2,000 rpm. The gas tank held 18.5 gallons of fuel with the soft top, 23.8 gallons with the wagon. Neither was available with an automatic.

The 1969 Land Cruiser had a top speed of 85 mph (wagon, 80 mph), with weight of 3,680 lb (hardtop) or 3,470 ponds (vinyl top); the station wagon (red) ran to 4,120 pounds. Torque, fortunately, was 217 lb-ft (at a low 2,000 rpm), making the overhead-valve six-cylinder engine, displacing 236.7 cubic inches, similar to the Plymouth 225 slant six in power. A single barrel carburetor was used, along with a three-speed manual transmission synchronized in second and third gears. The tires were four-ply 15-inchers.

In 1971, the Land Cruiser boasted a 155 horsepower (gross) engine, with a hydraulic column-mounted front wheel drive axle engagement unit. The Land Cruiser at that time came in a soft top, hard top, or station wagon version, and cost roughly the same as the Crown, US$2,855; the 3.8 liter straight six displaced 237 cubic inches (just more than the largest slant six), with a bore of 3.54 and a stroke of 4.0 inches. Peak torque was a decent 225 lb-ft at a low 2,200 rpm. The base transmission was a three-speed manual, both front and rear used leaf-spring suspensions and drum brakes, and 15 inch, 7.6 inch wide wheels were standard. The 90 inch wheelbase was short but good for rock climbing; overall length was 152 inches, width 66 inches, height 76 inches, and weight a hefty (but reasonable for the times) 3,470 pounds. By comparison, the Corolla weighted in at 1,566 pounds!

In 1974, the 3.9 liter straight-six pushed out 138 net hp @ 4,000 rpm (USA figures) with a progressive-opening two-barrel carburetor whose designed optimized driveability and saved fuel; electronic ignition, still fairly new, was used; and four wheel drive and a four-speed stick-shift were standard, along with a two-speed transfer case. 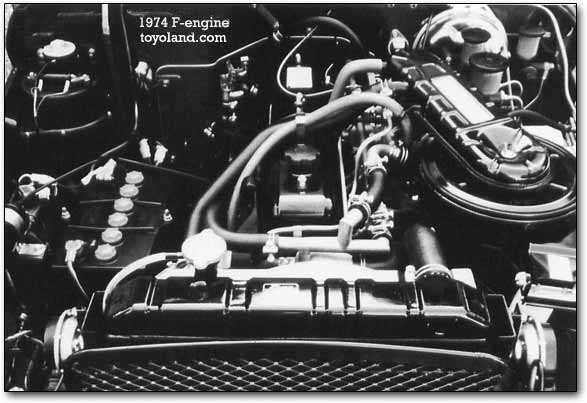 Steel skid plates protected the transmission, oil pan, and transfer case. Self-locking hubs were standard. Both front and rear heaters were provided. Power drum brakes were used along with traditional leaf springs. This was the model whose appearance is closely recalled by the FJ Cruiser. 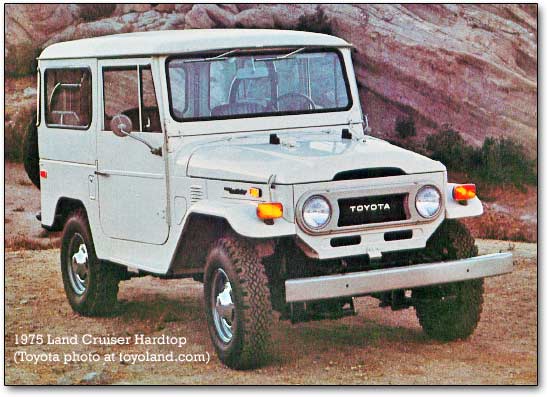 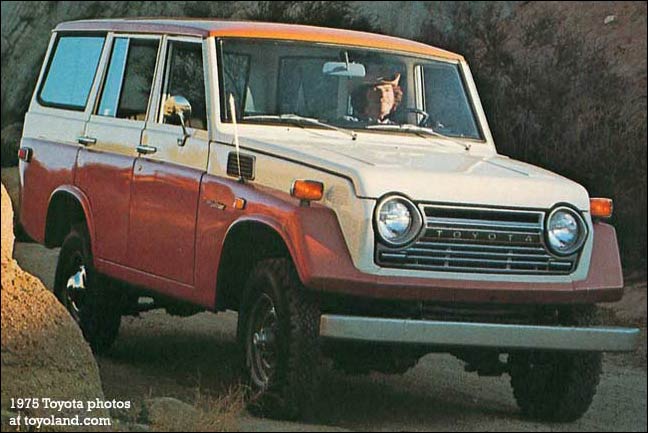 By 1983, both the hardtop and the wagon were available, powered by a 125 horsepower (200 lb-ft @ 1,800 rpm) 4.2 liter six-cylinder engine coupled to a four-speed manual transmission with a two-speed transfer case. For 1983, Toyota brought out a new instrument panel center section with better control visibility for the hardtop; both models were also given choke and 4WD indicator lights. Brakes remained front ventilated disc and rear drum. 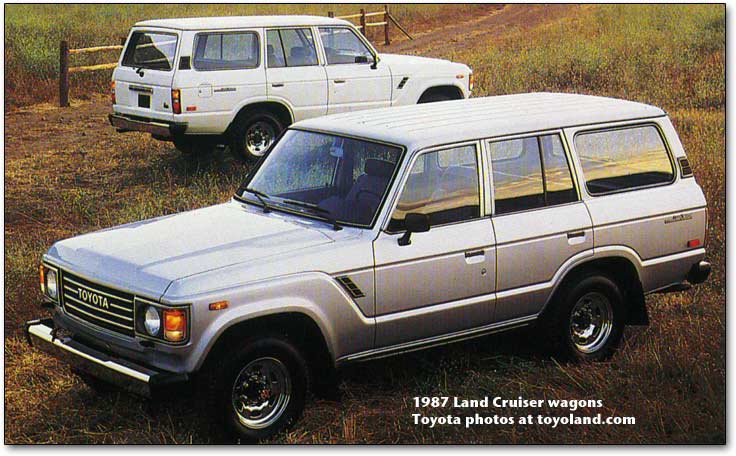 In 1991, the more familiar, modern Land Cruiser was brought out, much larger in size, with more luxury features and trim, a fully independent four-wheel coil spring suspension, and full-time four wheel drive. Just two years later, it got larger, gained a 24 valve dual overhead cam 4.5 liter six-cylinder with 212 hp and 275 lb-ft of torque, and 5,153  pounds of weight. In included seating for eight, automatic locking center differential, and manually locking front and rear differentials. In 1995, the Land Cruiser gained dual front airbags and adjustable seat belt anchors, bringing it up to date in such matters.

Seven years after the 1991 model, another redesign brought a larger, heavier, and more powerful Land Cruiser for 1998 which would also be the first model to get regular annual updates. Using the first V8 in a Toyota branded vehicle, a 4.7 liter engine with 230 horsepower (18 more than the straight-six) and 320 lb-ft of torque (45 more), it still managed to get slightly better gas mileage. A single year later, an independent rear automatic climate control system was added; two years later, in 2000, active traction control, vehicle skid control, and electronic brake force  distribution were added as standard equipment, along with a less significant six-disc in-dash CD player. In 2001, a DVD/navigation system was added along with other luxury features; 2002 brought standard third row seats and other standard features, so that the only option is the DVD navigation system. 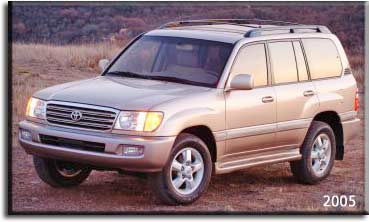 To be updated in summer 2018. The 2009 Land Cruiser is due soon, supported by international sales, with a redesign scheduled for 2009. At that time, the 5.7 liter engine is likely to appear with 380 horsepower; the fancy Land Cruiser, or Lexus LX570, already uses that engine. Expect to see more sophisticated four-by-four systems and height adjustments. 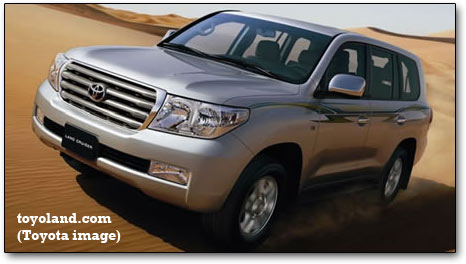 In 2003, the front grille and rear fascia were updated, the V8 was bumped by 5 horsepower, and additional standard features were added along with front and second row side curtain airbags. 2004 increased pedestrian safety by adding a backup camera to the navigation system (both are optional). 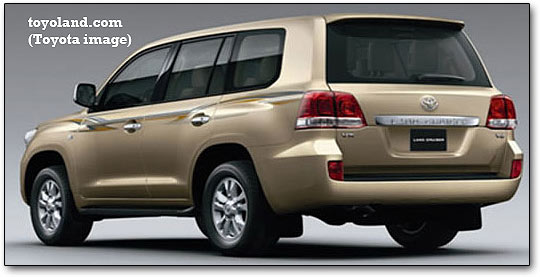 All Land Cruisers are built at the Araco Corporation plant in Toyota City, Japan.

FJ40 was the two-door hardtop and soft-top; FJ55 was the four-door wagon.

The hardtop was made of steel and fiberglass and came with front bucket seats. The soft top was vinyl with vinyl doors and side and rear curtains. The wagon included bench front and rear seats, locking hubs, power rear window, and rear heater. Air conditioning was only available on the wagon (optional). Accessories included a stereo tape player, AM radio, carpeting, electric winch, manual locking hubs (FJ40), and antenna..

BRAKES were power-assisted ventilated discs (front and rear), with anti-lock and a rear load sensing proportioning valve. In front, the discs were 12.3”; in rear, 13.2”.
STEERING was power-assisted recirculating ball (Overall Ratio: 18.6; turns to lock, 3.4; turning circle, 40.4 feet).
WHEELS were steel, with a full size spare; all had P275/70R16 tires.