It’s always been odd that the vehicles with the worst fuel economy and the longest time on the road have been subject to the least in terms of emissions and fuel economy standards—big rigs, more formally known as class 8 trucks. These are the tractor-trailers that ply the highways and byways of the nation, racking of hundreds of thousands of miles, constantly in use and lucky to get double-digit economy from their big invariably-diesel engines. 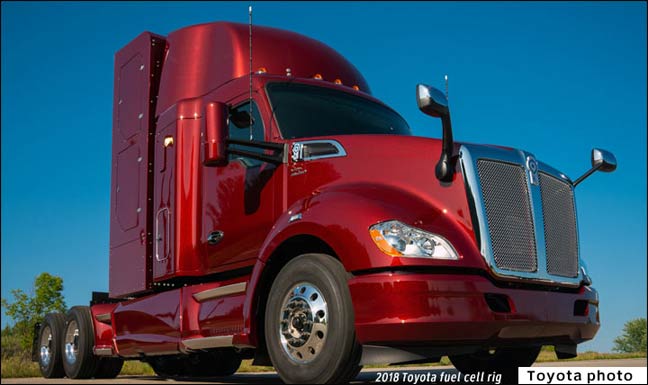 Congress finally realized that perhaps these trucks should be considered as part of the nation’s fuel-and-emissions package, after years of strong evidence that diesel particulates caused cancer, and that other exhaust gases caused problems from asthma to global warming.

Some in the trucking industry tried making their engines cleaner, though they did so reluctantly, and some of their methods backfired on truckers. Others made new trucks without any powertrains, since George W. Bush’s EPA chief, Scott Pruitt, said that they could reuse old powertrains to bypass the rules. After Pruitt resigned, after scandals about use of government funds for his own gain, the loophole was closed by another Bush appointee, Andrew Wheeler. There was also a third alternative: leaving diesel engines behind (and this is where Toyota came in).

Nearly all Class 8 trucks use diesel engines today, but as late as the 1970s, there were also gasoline powered big rigs. With the 21st century well in hand, hydrogen fuel cells and electric motors joined the mix. 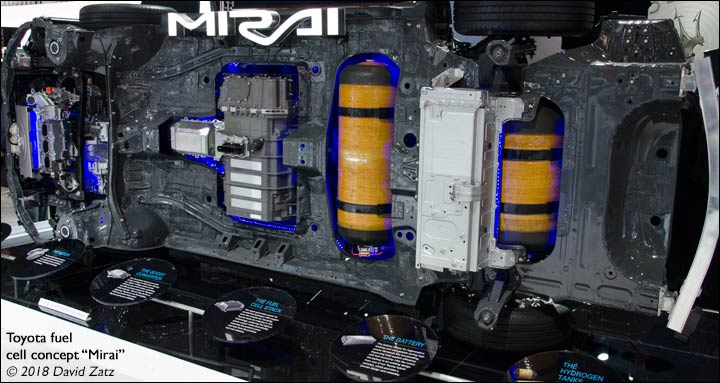 Electricity can be quickly dismissed for long-haul trucking, but fuel cells could be a long-term solution. The main proponent of hydrogen is Toyota, whose Mirai car is for sale in California. Their second-generation hydrogen-powered fuel cell tractor, dubbed Project Portal 2.0, was shown in 2018. This truck boasts a 300 mile range, a hundred miles longer than the original Project Portal, though not yet enough for commercial use. It will take a great deal of testing before it reaches the general trucking public.

The Toyota big rig is good for 670 horsepower and 1,325 pound-feet of torque, coming from dual fuel cell stacks and a 12 kilowatt-hour battery, and has a gross combined weight rating of 80,000 pounds. Toyota itself is using the trucks for its California port operations and other transit needs; the company has a strategy of gaining sales and power by having facilities in nearly every state, and that means a lot of trucking. 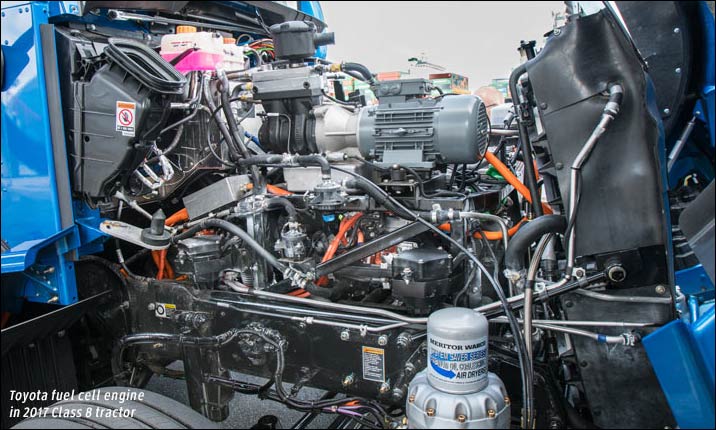 The main competition is probably Cummins, which has a massive market share in diesels, makes natural gas powered engines, and is also working on electric drivetrains. Last year, they showed off battery-powered buses, made as part of a joint venture, and their first off-highway electric powertrains for cranes, excavators, and loaders.

Trucking is the largest occupation of numerous towns, with 3.5 million professional truckers in the United States and over 7 million people working in the field (including non-driving positions).