Into an era of nostalgic cars — the PT Cruiser, Mini, New Beetle and revised Mustang — came a modernized version the 1970s’ FJ series Land Cruiser. Put them together and you get the 2007 Toyota FJ Cruiser sport utility vehicle (SUV), launched in March 2006. 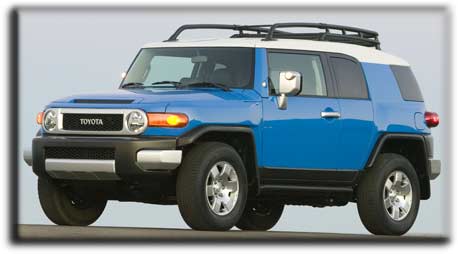 The Land Cruiser started out being quite similar to Jeeps of the day — light, tough, capable, and affordable. Over time, in the United States, it turned into a heavy, expensive, but still capable semi-luxury SUV. 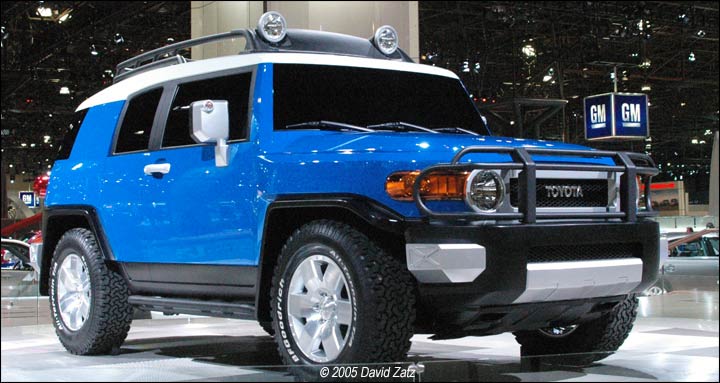 A variable-ratio, hydraulically assisted rack-and-pinion system steered 17-inch steel wheels (17-inch, six-spoke aluminum wheels were optional). With the standard 32-inch tires, ground clearance was a healthy 9.6 inches (only 8.7 inches for rear drive). Approach and departure angles were comparable to the 4Runner if not the Jeep Liberty.

*Range based on tire choices. Does not include Rubicon off-road special model. ** V6

The FJ Cruiser was powered by a 4.0 nliter (242 cid) V6 engine, with 24-valves and twin overhead cams (DOHC) producing 239 horsepower and 278 lb-ft of torque – nearly double the FJ40’s output. The engine had Toyota’s Variable Valve Timing with intelligence (VVT-i) system; lightweight pistons with resin-coated skirts to help reduce friction and noise; a two-stage, variable-length intake manifold, to improve mid-range to high-speed performance; newly designed 12-orifice fuel injectors; and a lightweight electronic throttle. Just about the only downside of this engine was the premium fuel requirement, though it’s worth noting that it didn’t quite reach the Jeep Liberty’s highway mileage. 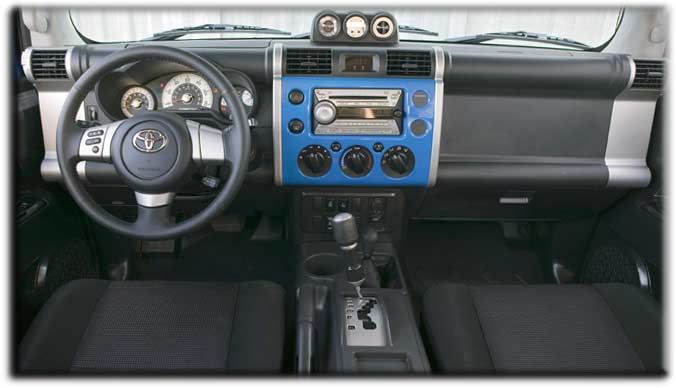 The rear drive models came with five-speed automatic transmissions, while the 4x4 could be ordered that way or with a six-speed manual transmission. The electronically controlled automatic had a system that automatically varied the shifting pattern based on road conditions and the driver's intent; Flex Lock-Up Control for the locking torque converter allowed the torque converter clutch to be half-engaged, enhancing fuel efficiency. Fourth gear was direct drive (1:1) and fifth gear was an 0.716:1 overdrive.

The six-speed manual transmission’s fifth gear was direct, with sixth being an 0.799:1 overdrive. The shift pattern is the standard three-plane double-H, with Reverse in an additional plane to the far left and up.

A two-speed (low and direct drive) transfer case was borrowed from the V6-powered 4x4 4Runner, when the manual transmission was ordered; it had a Torsen® limited-slip center differential with a locking feature, distributing the power 40% to the front and 60% to the rear in most driving conditions. The distribution was altered as needed, based on steering angle and wheel slippage. When locked, it went to 50/50. The crawl ratio was 41.84:1, which helped the FJ Cruiser to traverse California's famed Rubicon Trail in September 2005. 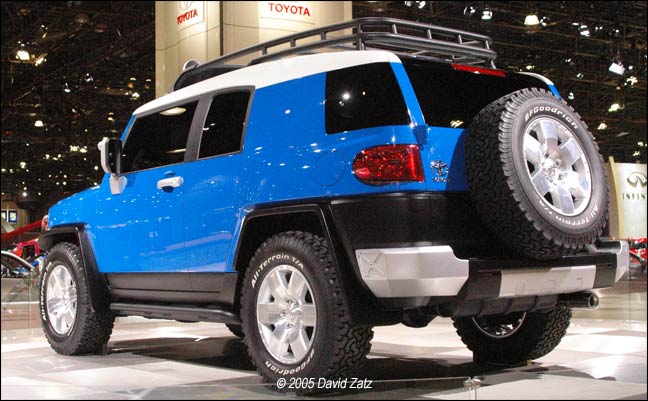 With automatic-transmission models, FJ Cruiser used a part-time transfer case with a direct drive or 2.566:1 low range bringing a crawl ratio of 33.76:1.

Because the FJ Cruiser was optimized for dusty, muddy driving environments, seating materials were water-repellant, and also provide good ventilation. The seat fabric was backed by a special breathable resin coating to shed liquids so that seats can easily be wiped down and cleaned. The stitched seams were treated with sealant to prevent liquids from penetrating. The FJ Cruiser's floor was covered with a gray rubber-like material.

Suicide doors opened to 90°; a swing-up glass hatch in the side-hinged rear door opened independently to accommodate longer items such as lumber or surfboards while keeping the rear door closed.

Wheel arches are angular and open to provide maximum clearance for the FJ Cruiser's large 32-inch tires at full suspension deflection. The arches are edged by flexible fender flares that resist damage during vigorous off-roading – and also resist damage from the doors of the vehicles beside which the FJ Cruiser might find itself parked. 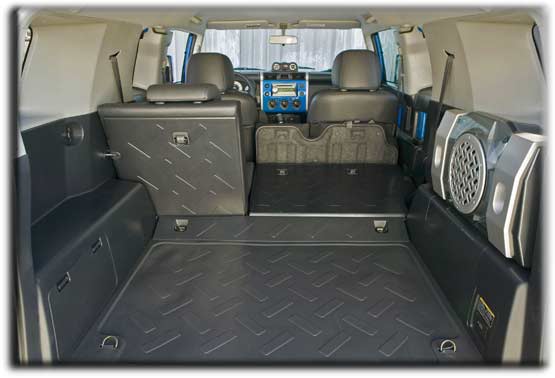 Dual-stage front driver and passenger advanced airbags are standard with the FJ Cruiser. Two rows of side-curtain airbags, as well as driver and front-passenger seat-mounted side airbags, are available as options. As with all other Toyota SUVs, the FJ Cruiser is equipped with Toyota's Star Safety System™. This includes Vehicle Stability Control (VSC), Traction Control (TRAC), an Antilock Brake System (ABS), Electronic Brake Force Distribution (EBD) and Brake Assist.

Four-channel, four-sensor ABS helps prevent the wheels from locking under hard braking, while EBD distributes appropriate braking force between the front and rear wheels according to driving conditions. The traction-control system (TRAC) helps reduce tire slippage during slippery or challenging driving conditions, and the VSC system helps keep the FJ Cruiser on the driver's intended course by detecting front- and/or rear-wheel slide during cornering and attempting to control slide conditions via torque intervention and/or braking of individual wheels.

Instead of the usual pair of front windshield-wiper arms, the FJ Cruiser uses three wiper arms to provide nearly complete coverage of the vehicle's wide windshield. Diffusion-type nozzles are used in the washing assembly to provide superior washing performance. The same type of diffusion nozzle is used on the rear-window washer.

As an aid to driver and front-passenger comfort, the floor angle in the footwell is set at 33 degrees to help those in the front seats maintain proper seating position. 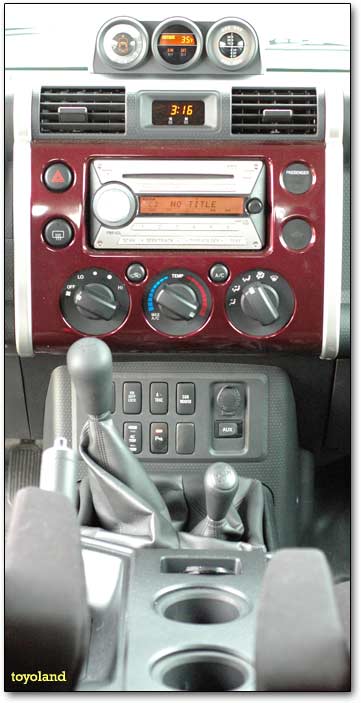 Three audio systems are available in the FJ Cruiser. An AM/FM/CD system with six speakers is standard. A Premium Audio FJammer AM/FM eight-speaker system that incorporates an in-dash six-disc CD changer is available as part of an option package. Finally, the same FJammer Premium Audio system is available with a ninth speaker – a 7.9-inch subwoofer, powered by its own dedicated amplifier, incorporated into the right-rear panel of the rear cargo compartment. An on/off switch for the sub-woofer is located in the dash's lower-center switch cluster. An auxiliary jack also is located in the lower-center switch cluster to provide input for portable audio devices – i.e., MP3-like devices - and a 12-volt DC accessory socket is provided to power those devices.

The FJ Cruiser is equipped with a pair of NXT SurfaceSound transducers, which convert the vehicle's ceiling into a speaker diaphragm. It marks the first time this technology has been used in a motor vehicle. The result complements the conventional speakers elsewhere in the vehicle, creating a broad, omni-directional dispersion of sound.
Buyers can personalize the FJ Cruiser by selecting one or more of the following packages. A Convenience Package includes keyless entry, cruise control, power side-view mirrors with image lights, daytime running lights, privacy glass, rear window wiper; and rear parking sonar.