Originally based on the Toyota HiLux (Tacoma), the 4Runner has been a true off-road SUV since its birth; the name is a reference to trucks sent to scout off-road trails. The 2010 version is still on sale in 2020, though there were numerous changes since its launch including a 2014 facelift with projector headlamps and LED taillamps, along with an updated interior and braking system. The TRD Pro was launched in 2015, including Bilstein shocks with remote reservoirs, special front springs, and a front skid plate; each year, it had an exclusive color. In 2017, the Trail and Premium were renamed TRD Off-Road and TRD Premium in the United States, but were otherwise essentially unchanged and don’t have the Pro’s suspension. The 2020s gained “Toyota Safety Sense-P” on all models (see Safety section), as well as Entune 3.0 telematics, CarPlay/Android Auto, Alexa, and a wifi hot-spot. 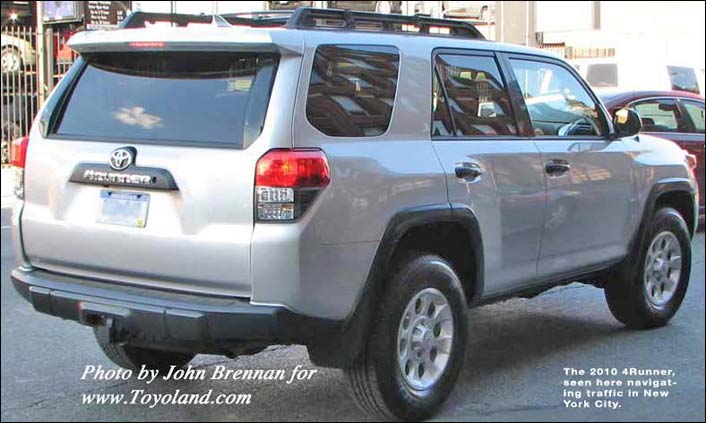 Toyota is rolling out its 2010 4Runner to hit showroom floors on November 22, 2009. Toyota is anticipating relatively modest sales this year. With peak annual sales of approximately 100,000 units, Toyota has scaled back expectations to about 35,000 units this year. Despite modest sales, a Toyota spokesman stated, "We're not going to abandon this thing." 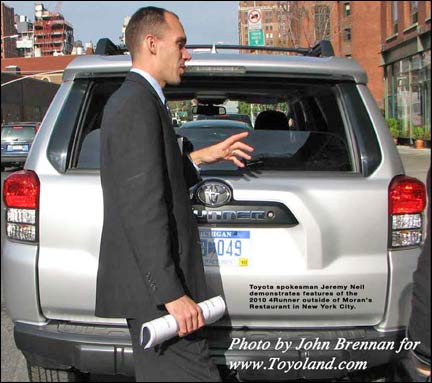 Originally based off of the SR5 four-wheel-drive compact pickup truck, production of the 4Runner began in mid-1984. This 5th generation 4Runner marks the 25th anniversary of production. Over 1.8 million 4Runners have been sold in that time, of which roughly 1.3 million- over 75%- are still in operation today.

The 2010 4Runner was originally available in three grades. The Trail version was the most rugged, intended for heavy off-road use; the SR5 provided more comfort; and the Limited edition had added comfort features. A V8 version was later available for the rather similar Lexus version. In 2020, there were many more trims (which befitted its much higher sales): SR5 Premium, TRD Off-Road and Premium, TRD Pro, Limited, and Nightshade (a version of Limited). The various TRD versions were 4x4 only, while the others gave owners a choice of two or four wheel drive. 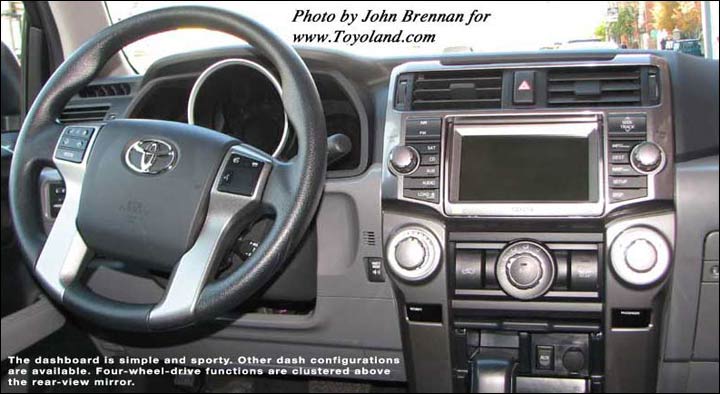 The 2010 4Runner has a reinforced body-on-frame design featuring a fully boxed frame, high-strength steel and a larger suspension. It's larger, more powerful, more fuel-efficient and more comfortable than previous generations. Toyota hopes to enhance the value of the 4Runner by keeping the price unchanged even with the model improvements. 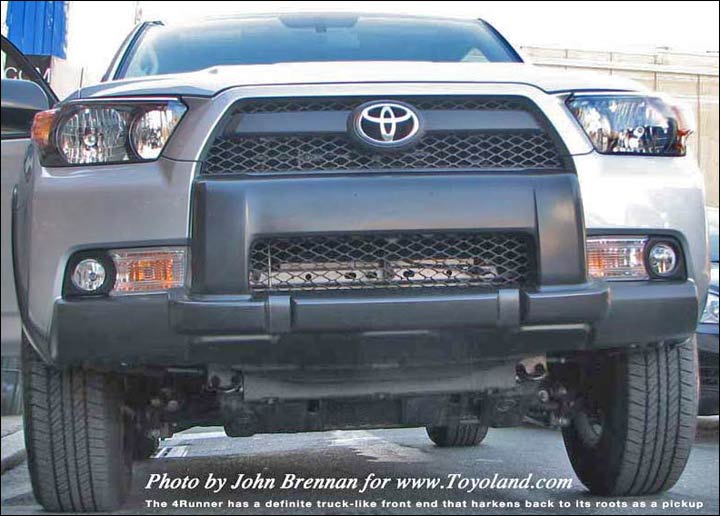 Toyota spokesman Jeremy Neil described the 4Runner as, "the progression from the FJ Cruiser." When that adventurous FJ Cruiser driver has a family, the 4Runner will suit his new responsibilities while allowing him to continue an adventurous lifestyle on the weekends.

The 5th generation 4Runner was built and designed in conjunction with Toyota's subsidiary Hino Motors in Tahara, Japan. The V6 SR5 was seen as taking 78% of production; 17% was predicted for the Limited and 4% for the Trail. 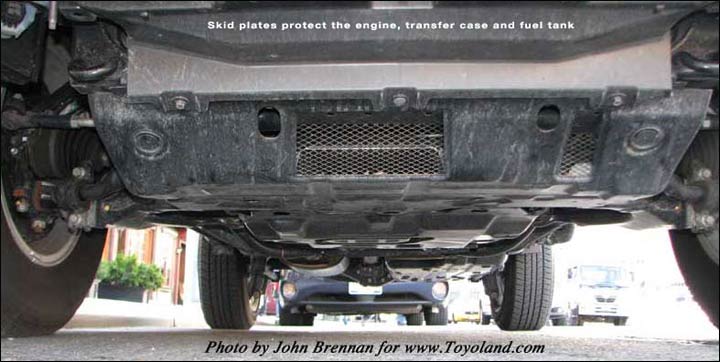 The 2010 4Runner comes with a 270 hp (at 5600 rpm) 4-liter V-6 that produces 36 more horsepower than the outgoing V-6 and 10 more horsepower than the older V-8. Fuel economy is increased by as much as 10%. The four-wheel-drive model has EPA ratings of 17 mpg city, 22 mpg highway and 19 mpg combined. The two-wheel-drive version gets a slightly better 23 mpg highway. A 4-cylinder version with EPA ratings of 23 mpg highway and 20 mpg combined was available in early years. 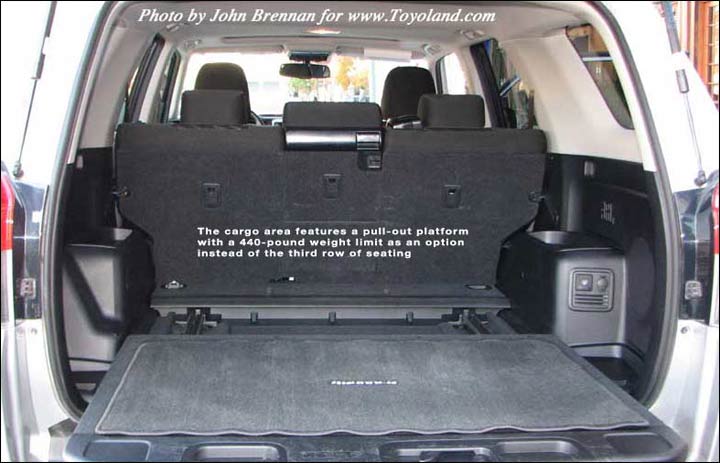 The sound system includes a "Party Mode" sound equalizer that allows for improved audio quality outside the rear of the vehicle when tailgating or camping. The rear cargo area also comes equipped with both 120-volt and 12-volt outlets. Instead of the third row seating, you can opt for a sliding rear cargo deck with a 440 pound capacity. Wheels are 17-inch aluminum alloy for the SR5 and Trail version; 20-inches for the Limited. All models come standard with a roof rack.

Staring with the 2020 4Runners, an eight-inch touchscreen was standard, with Apple CarPlay, Android Auto, and Amazon Alexa. Eight speakers were standard. The driver got a new gauge cluster with a 4.2 inch screen showing car data, while rear-seat passengers got two USB charging ports.

The front suspension used coil springs as part of a double-wishbone design with a stabilizer bar; in back was a coil-spring four-link suspension with a stabilizer bar. Steering was a rack and pinion design with an 18.4 ratio and 37.4 foot turning diameter. Brakes, at least in 2020, were ventilated discs, 13.3 inch in front and 12.3 inch in rear; antilock brakes were standard, with, in 2020, electronic brake force distribution, emergency brake assist, and stability control. All but the Limited had 17-inch wheels (7.0 wide for SR5 and TRD Pro, 7.5 wide for Off-Road); the Limited had 7.5 x 20 wheels. The various models had different wheel designs. Tires were P265/70R17 and P245/60R20, and were mud-and-snow all-seasons, except on TRD Pro, which got all-terrains. They came with a full size spare. 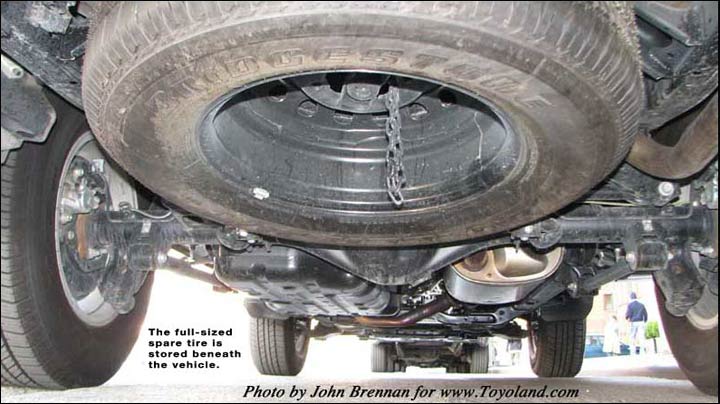 The V6 will have a standard towing capacity of 5,000 pounds with a tongue weight of 500 pounds. The 4-cylinder will have a 2,000 pound capacity and 200 pound tongue weight. The new 4Runner is on a global Toyota SUV platform shared with Land Cruiser Prado, Lexus GX and FJ Cruiser. The 4-liter V6 engine is shared with the Tundra full-sized pickup truck, the FJ Cruiser and the Tacoma Compact Truck.

It was engineered specifically for the harsh global markets in the Middle East and Australia. The wheelbase is 109.8 inches with a 32 degree maximum climb angle and a 42 degree maximum side-slope angle. Maximum approach angle is 30 degrees (2WD) or 33 degrees (4WD) and maximum departure angle is 26 degrees (24 degrees with hitch receiver). The water fording depth (at walking speed) is 27.6 inches (roughly the top of the tires) and the minimum running ground clearance is 9 inches (2WD) or 9.6 inches (4WD). Skid plates protect the engine, transfer case and fuel tank. There are also two front tow hooks.

The 2021 4Runner Trail Edition, based on the SR5, has rear or four wheel drive, and comes in Army Green, Cement, Midnight Black, and Super White; around 4,000 will be made as 2021s, with black badges and all-weather floor liners.

The 4Runner Trail Edition has dark gray TRD Off-Road wheels and a Yakima LoadWarrior rooftop cargo basket; it also has a custom 40-quart cooler and sliding cargo tray. The cooler comes color-keyed with Cement or Army Green exterior 4Runner colors, while on Super White and Midnight Black 4Runner Trails the cooler is Cement.

Note: These off-road specs were checked from Toyota’s 2010 and 2020 listings.