The Texas plant begun in 2003 and completed in 2006 was designed to elevate the Toyota Production System (TPS), widely considered the industry benchmark in quality, efficiency and technological advancements, to a new level. 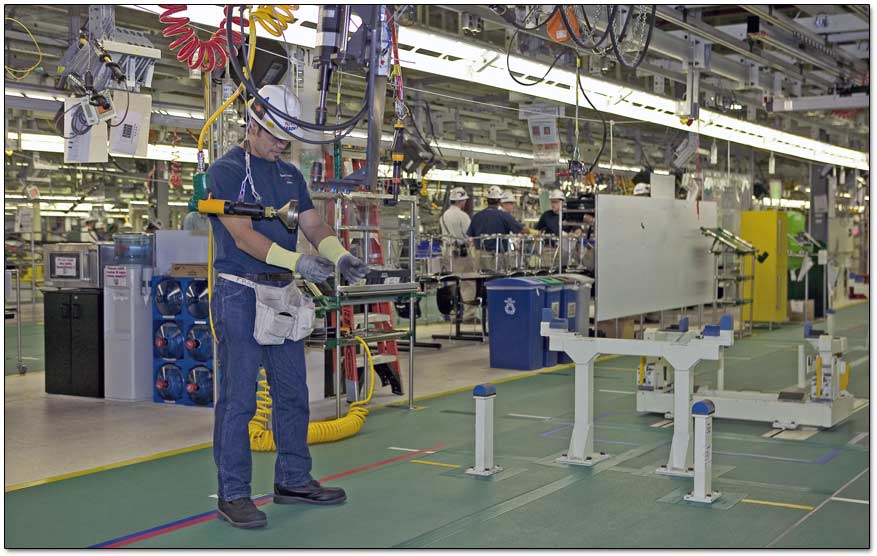 "Our facility will introduce numerous recently patented production and assembly advancements that, for now, must remain proprietary," said Don Jackson, vice president of TMMTX production and quality. "But even more important to establishing a new benchmark for the Toyota Production System, will be how a vast network of 21 separate parts and components suppliers have been incorporated and integrated on site. TMMTX will be the first automotive assembly plant to integrate numerous supplier parts-production facilities on the same grounds and, in some cases, under the same roof, as the main assembly plant." 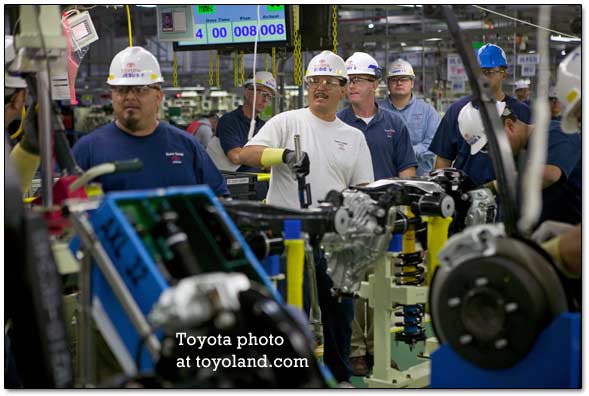 One such example is Avanzar, a new joint-venture between Detroit-based Johnson Controls and a San Antonio-based minority-owned company that will build seats for the new Tundra. The company has a facility on the TMMTX grounds that will build steel seat frames. The finished frames are then shuttled less than a mile to a receiving dock of the Avanzar production facility located under the same roof as the main assembly plant. 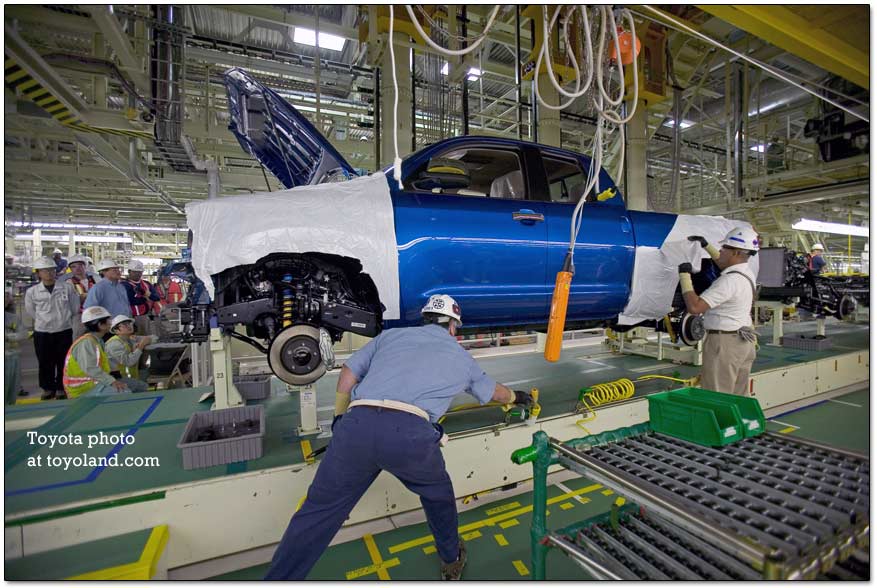 The frames provide the skeleton for front and rear seating systems that are assembled to order, as needed, on the TMMTX assembly line. For example, an order is received from the factory for a bucket seat set of specific color and fabric design, for a specific truck. Each truck has a katashiki, a specific recipe, detailing every variable from trim level to color to seat configuration.

The seats are built, then mounted onto an elevated track system that connects the Avanzar production facility with the main assembly plant. Less than an hour after receiving the order, the seats arrive at the assembly point, less than five minutes prior to the arrival of the truck in which it will be installed.

"Because Avanzar is on site, it eliminates the need to transport the seats from a remote factory," said Jackson. "There is no need for component packaging and no freight costs. This eliminates land fill waste and reduces the environmental impact of fuel consumption associated with freight movement. More importantly, with the production facility virtually in house, we have a close connection with the supplier, should component quality issues be detected. The ability to significantly shorten the duration of any quality issue is a huge advancement and certainly makes my job easier."

Like Avanzar, the Reyes Corporation is a San Antonio-based minority-owned joint venture with Lear and Amtex. The on-site Reyes plant produces interior plastic trim pieces, as well as carpet sets for the new Tundra. What makes the Reyes relationship with TMMTX so special is its role in the innovative process known as parts "kitting." TMMTX is the first Toyota truck assembly plant to adopt the kitting process, which is currently used at its most advanced passenger-car factories. Kits, or sets of parts, can be delivered to a specific installation point, or mounted inside the truck as it travels down the assembly line delivering parts to more than one installation point.

Reyes Plant Manager, Mark Goss, likens the system to the prep-cook area inside an upscale restaurant, which cooks specific components, such as steamed vegetables for a larger platter.

"The turnaround time from when we receive the order, to when the part is installed, will be 57 minutes once the factory is fully up to speed," said Goss. "During pre-production prototype build, we were told that some of our plastic parts were still warm…sort of like fresh cookies out of the oven."

The Reyes plastic parts are manufactured per specific katashiki order, packed into a hanging plastic sleeve---similar to a closet organizer--- and delivered to the main factory with other kits on an hourly basis. The empty kit sleeves are returned to be used for the next batch of parts. As with the Avanzar model, freight delivery costs and packaging are eliminated. And since parts are manufactured in small batches, quality issues can be quickly detected and corrected.

"Quality has always been the number one concern in the TPS system," said T.J. Tajima, TMMTX President. "However, Toyota's global corporate commitment to the environment is seen as an equally important component. Our innovative on-site supplier network was instituted to improve vehicle quality and reduce environmental impact. The fact that this new system also reduces time, raises efficiency and is significantly more cost-effective, are satisfying bonuses."

On-site vendor manufacturing was pioneered by the former Chrysler Corporation, particularly in its new Brazilian plant (closed shortly after Chrysler was acquired by Daimler-Benz), as well as its new Jeep Wrangler facility. However, Toyota appears to have a more advanced version of this system, geared as much to quality as to cost reduction.

Texas is the capital of full-size pickup sales in the United States; roughly one of every seven full-size pickups sold in the U.S. is sold in Texas. The area south of San Antonio offered a large tract of flat, open ground required to build such a large facility. While the U.S. has an abundance of open lands, it is not easy to locate that large a parcel near major workforce and transportation resources.

An important component offered by the San Antonio site is access to the state's transportation facilities – both rail and highway. The plant requires two-way transportation, to bring in parts and materials and ship out finished Tundras. The plant is near two major Interstates, 10 (east/west) and 35 (north/south), which connect it to the nation's interstate highway system. It is also immediately adjacent to a pair of competing rail lines. This gave Toyota the opportunity to build connections to each of these lines, and to build loading docks so that multiple rail cars can be loaded at the same time.

The second critical factor for choosing San Antonio as a site for the new Tundra plant was the availability of a large pool of qualified workers. San Antonio is the eighth-largest city in the U.S. and the second-largest in Texas. Toyota received more than 100,000 applications for the 2,000 high-paying manufacturing jobs. The company strives to reflect the diversity of the communities in which it does business. TMMTX's workforce reflects San Antonio's diverse population, which is about 60 percent Hispanic.

Building the plant was an enormous task, considering the 6.5 million cubic yards of dirt moved, the 250,000 yards of concrete poured (enough to pave a two-lane highway 53 miles long), the 15,000 tons of steel erected and the 10 acres of railway siding installed.

At a total cost of $1.28 billion, the result is 2.2 million square feet, or 46 acres, of main factory built to construct the 2007 Tundra from scratch, starting from coils of steel rolling into one end of the building and ending with gleaming, powerful trucks rolling out the other. The plant contains stamping, welding, paint, plastics and assembly facilities where TMMTX team members can build Tundras at a rate of up to about 750 per day.

On-site and fully integrated with the main plant are separate production and assembly facilities for 21 individual parts and component suppliers. That means that an additional 1.8 million square feet were constructed to house their operations and an additional 2,100 workers. There are many advantages to this arrangement, not the least of which is logistics costs. Traditionally, auto suppliers are located in the Midwest and South. Bringing them on-site reduces parts shipping costs. Parts are provided to the main Tundra production facility as they are needed. Little of what goes into the new Tundra is sourced from Japan: approximately 80 percent of the content is domestic.

Co-location also speeds communications. TMMTX and its on-site supplier partners can quickly react to and solve problems as they arise. It's also better for the environment, reducing over-the-road trucking and resulting emissions. Finally, the on-site suppliers invested an additional $300 million at the site, a further economic development boost for the community.

Seven of the 21 on-sight suppliers are minority-owned, including six new joint ventures between San Antonio-based businesses and traditional U.S. and Japanese auto industry suppliers. These seven companies are majority-owned by minorities. This represents a unique approach to supporting the further development of a minority supplier base.

Building Tundra is a highly choreographed process. First, Toyota Motor Sales (TMS) places orders. They create long-range forecasts so manufacturing can order parts, and production-controllers can tell plants what exactly to build. In a process called "sequential build," each bare chassis comes down the line and has a paper manifest attached, that shows what type of parts the truck needs, much like a recipe. This requires a sophisticated parts-delivery system to ensure that parts are getting to the line to match the vehicles. Having the seat company on site, for instance, means that the seat company will get a list of the exact vehicles to be built that day and in the order in which they'll be built. The finished seats are shipped to the plant and loaded onto the assembly line in the proper order. Team members verify that the seat is correct.

TMMTX operations ramped up in steps. Beginning back in September 2006, the plant began pilot versions of the truck. This phase was designed to make certain
• that all the production equipment works as it was designed to work
• that all manufacturing processes all work as they should
• all team members are properly trained
• and that all the parts fit together correctly on the truck.

The TMMTX factory floor features a blend of automation and manpower. In the welding and painting areas of the plant, robots do much of the work. Nearly 400 handle painting and welding, making those areas about 90-percent automated.

Even where manpower is primarily used, a variety of "assist devices" help assembly workers lift and move heavy, bulky items such as seats and doors. Using this creative combination of muscle and machine, it takes about 24 hours going from raw, coiled steel to finished, painted, rolling and running state-of-the-art pickup.

In keeping with its state-of-the-art technology and processes, Toyota's newest production facility will be the company's most environmentally-advanced to date. For instance, TMMTX has prioritized the reduction of paint booth emissions by using only cartridge-based paint systems. The advantage is that it eliminates the need to purge paint lines when a color change is made. The primer paint booth uses a water-born paint system, a first for Toyota in North America and further protecting the environment. [Note: other manufacturers, including Chrysler, have long used such systems.]

Water, in fact, is an important consideration in this area of Texas, and TMMTX employs a number of water conservation measures. The plant was designed to consume as little as possible. TMMTX buys recycled water from the San Antonio Water System for 100 percent of its processes. The only fresh water used at the plant is for the kitchen and restrooms.

In addition to conserving resources and preventing emissions, the San Antonio plant reduces waste in a number of ways. It operates as a zero-landfill facility, meaning no waste will be taken to a landfill. The plant will recycle extensively.

For instance, scrap steel will return to the steel mill, scrap plastic will be shredded and returned to a pellet manufacturer. Even the amount of packaging of new parts – packaging that might ordinarily be thrown away – has been minimized. Substituting wooden pallets with plastic will also make a difference. Wood breaks up and wears out, then must be disposed of in a landfill, while plastic can be used over and over again for a much longer period of time.