Toyota is the seventh largest company in the world and the second largest manufacturer of automobiles, with production facilities in 28 nations around the world — and the highest-production facility of any non-domestic automaker in the United States. Generally, Japanese plants are flexible and produce multiple models, while foreign (especially American) plants are devoted to a single model.

Toyota plants around the world

In June 2006, Toyota had 52 overseas manufacturing companies in 27 countries outside Japan; Toyota markets vehicles in more than 170 countries / regions.

The Toyota Motor Group sold about 8.8 million Toyota/Lexus, Daihatsu and Hino vehicles worldwide in 2006, marking a new record. In 2007, the Group is aiming for a 6 percent increase in worldwide sales. Toyota President Katsuaki Watanabe, in his 2007 new year’s greeting, said that Toyota must implement thorough measures concerning quality and reinforce the foundations of manufacturing by implementing additional localization measures, including human resources development from a global perspective and further support for local affiliates to operate autonomously. Toyota intends to introduce a flexible fuel vehicle (FFV) that can run on 100% bioethanol in Brazil. The year 2007 will be the 70th anniversary of the establishment of Toyota Motor Corporation.

Toyota recently put special Komatsu stamping equipment into its San Antonia plant; the new presses use a third less energy than the prior stampers, and are quiet enough that employees no longer need sound protection gear. The stamps are smaller as well, so the factory ceilings can be lowered, dramatically cutting heating and cooling costs. The new stamps will be used in all Toyota’s new North American plants, according to Automotive News, and will be retrofitted to older plants. The main difference is the technology, which uses servo motors rather than hydraulics. Toyota is the world’s first automaker to use the new technology.

Toyota and Mazda are building a new plant in Alabama, which will make around 300,000 crossovers per year, divided evenly between the two companies.

Toyota’s first US plant, opened in 1984, a joint venture with GM noted for its high quality. Had 5,400 employees in 2006, run by a Japanese president. Closed in 2010: put into bankruptcy by Toyota, with the US pension guarantee fund taking up Toyota’s share of workers’ pensions.

The company’s only surviving union plant, out of two (the other was NUMMI). Known for high quality. Opened in 1987, it was Canada’s first Toyota assembly plant, and North America’s third; after this one, plants were to be built in anti-union states, preferably over farmland rather than re-using industrial sites.

In 2021, the plant will stop making Sequoias, leaving more space open for more Highlanders and Siennas. It was upgraded in 2019-2020. Sequoia was an odd one for the plant to make, since it’s body-on-frame and the others are unibody.

When built, it was Toyota’s largest factory outside of Japan, and had the highest production of any import plant in the US. It builds engines and powertrain parts as well as assembling cars, and made Toyota’s first American-built hybrid. In 2006, the plant president was American. Models in 2002 were the Avalon, Camry, and Solara; in 2003, Avalon, Camry, Solara, and Sienna; in 2006, Avalon, Camry, Solar, and Camry Hybrid. The 2003 roster had 6,900 employees with a capacity of half a million vehicles and half a million engines.

Built in 1983, this plant makes aluminum alloy wheels for North America and Japan, with a 1.45 million wheel capacity in 2003.

This list does not include such support systems as Toyota Tsusho America (mostly logistics - import and export; Tsusho is Japanese for trading, and they are basically a logistics service for Toyota). In Georgetown they have a steel division that imports steel for TMMK directly or to various customers who then form/cut/etc. and then resell to TMMK. Another section deals mainly with car parts imported from the parent company in Japan, Toyota Tsusho Corporation. They warehouse and/or crossdock to our customers, the main ones being TMMK subsidiaries or suppliers. Another section imports fabric and upholstery and has a die/cut operation. Another section orders and supplies service parts for the TMMK plant lines to keep them up and running. "Our current President is Takashi Hasegawa and Vice President is Yoshiki Miura." Thanks to Judith Jansen for pointing out the absence of Georgetown and letting us known about Tsusho.

Thanks to Ali Robinson for pointing to a more current resources which led us to fix Kentucky information and add Delta, B.C. and Long Beach, CA.

Toyota Canada Inc. (TCI) is in Toronto, with regional offices in Vancouver, Calgary, Montreal and Halifax. Toyota parts and accessories are distributed through TCI’s Parts Distribution Centres in Toronto and Vancouver. Three Toyota models - the Corolla, Matrix, and Camry Solara - are built in Canada by Toyota Motor Manufacturing Canada Inc. in Cambridge Ontario.

Toyota first entered the United Kingdom in 1992, and currently employees nearly 3,000 people there. The Avensis and Corolla are made at Burnaston (near Derby), and engines are made at Deeside, North Wales. The Bernaston plant, Toyota’s first auto assembly plant in Europe, can make up to 220,000 cars per year.

Toyota seems satisfied with its British factories, despite the strength of the pound against the euro. Toyota argued that, while other companies (particularly Ford) are moving to continental Europe to get better exchange rate, Toyota was happy with the efficiency of its British plants, particularly the Burnaston factory.

Toyota Asian factories (outside of Japan) 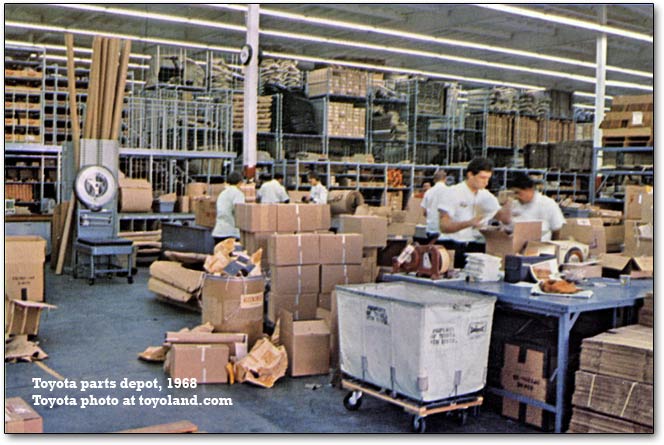 * Produces vehicles other than Toyotas, too.

The Brazilian plants are Sao Bernardo do Campo-Sao Paulo and Indaiatuba-Sao Paulo; the former is for components, the latter for cars. Indaiatubo built the Fielder until 2008. 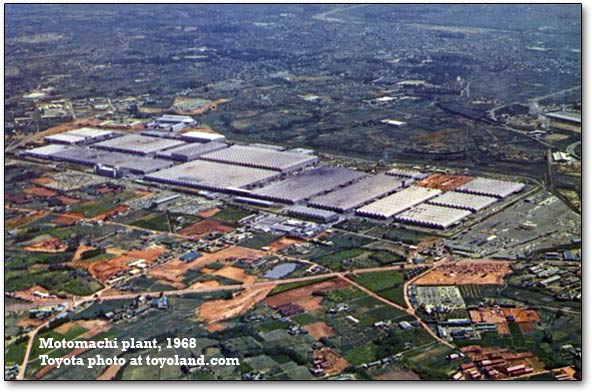 The Lexus plant in Tahara, which builds the Lexus LS 600 and its engines, was recently profiled by Automotive News (July 9, 2007). To build the LS 600 h, workers are trained continuously, and recertified every four months. The cars are manually checked and rechecked, even to color shading and tints; 26,000 operations are checked at the plant. Workers learn to pick up the right number of bolts each time and do finger-strength exercises, and can hear when bolts are torqued correctly.

Each LS 600 h is test-driven for straight tracking 56 mph, for lack of noise, and for good reactions under hard braking and acceleration. Two hundred inspectors look for scratches on car bodies, twice as many as in a normal Toyota plant; 4,000 points are checked on each car. Robots also take over 1,200 photos of each car to find scratches that people might miss. Both people and machines check gaps and assure that body and interior panels are perfect. Paint colors are inspected under different types of light.