From Constant-Content. By Andy Boxall.

The Toyota MR2 is definitely fun — not very practical, but for a college student or single person with economy on their mind, the Toyota MR2 may be the car to consider. The MR2 is a two seat, four cylinder lightweight with the spirit of a sports car. Made with an optional turbo-charged engine, the MR2 is sure to turn heads and provide enjoyment behind the wheel.

I purchased my first Toyota MR2 about 5 years ago, and until recently it has run like a champ. The gas mileage is good (about 30 miles to the gallon), the car is quick, responsive, and a pleasure to drive.

The first noticeable downside to the MR2 is the complete lack of cargo room. The engine is located behind the seats, which leaves just enough trunk space for a set of golf clubs. Under the front hood we find a second cargo space that is mostly occupied by the spare tire. There is literally no back seat, with barely enough room to store a single textbook behind each seat.

Even with the limited capacity, the MR2 is still a wonderful car. I personally can't see owning an MR2 with an automatic transmission, but they were made. I enjoy the response when shifting through a 5-speed manual transmission. The car is noisy but it is an enjoyable, high-performance noise.

Other downfalls include the lack of cruise control (available on some MR2s), and there is no power steering. No power steering could be argued as a good or bad thing. I like the responsive control and maneuverability it provides, however, some people don't enjoy the workout that comes along with stiff steering.

The vehicle does well on long road trips, although a lack of cruise control will make you feel like you walked the last hundred miles. The four cylinder engine is powerful but isn't made to handle heavy cargo. If you load this car down for a road trip, the gas mileage will suffer.

Maintenance of the MR2 isn't bad, although there are a lot of things that could be improved. The air filter can be a special-order item, and the oil filter is very hard to change. Sometimes there just isn't enough space in the engine compartment for a normal human being to be able to fit a normal tool. Despite some small contortion capabilities that must be obtained in order to work on this vehicle, the maintenance itself is not difficult and parts are easy to find.

The MR2 is a pleasure to drive and it's reliable as well; to me, its advantages overcome its weaknesses, but if you need to hold four people or any cargo at all, it won’t be the best car for you. 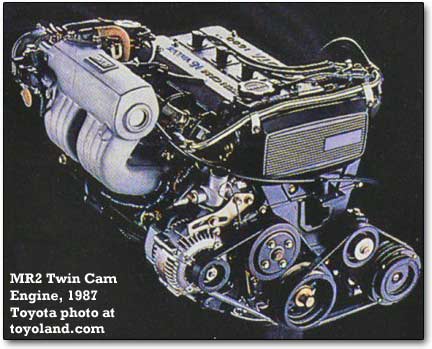 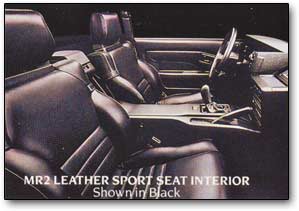 Courtesy of the now-defunct Night Beat of Rhode Island. Written by David Zatz.

The Toyota MR2 first received a supercharged engine in its first generation, in 1988; the four-cylinder put out 145 horsepower, a sizeable increase over the base MR2 engine.

The Honda CRX Si and Toyota MR2 have more in common than most cars. Both have two doors, two seats, and four-cylinder, 16-valve engines. (The CRX has cheaper 8-valve models, and the MR2 has an optional turbocharged engine). Both handle well, have two seats and good warranties, and are Japanese. The engines roar when they're revved up, although the MR2's sounds more powerful. It's a sporty roar, one that makes you want to keep the pedal down. You can hear the MR2 coming down the street and know that it's got more than an Escort engine. Even the base MR2 with 130 horsepower - which we tested - is zoomy and sounds exciting; the turbo model, with 200 horsepower and 200 lb-ft of torque, is even more impressive.

The handling of both cars is also excellent, and neither one relies solely on big tires. The CRX takes a little getting used to, but once one has driven it for a while, it fits like a glove. As well as the CRX handles, the MR2 is better; it has an incredibly firm grip on the road. The MR2 is also easier to steer at low speeds.

Both cars have lots of space for people, with the MR2 having more headroom and the CRX having a bit more elbow-room. The seats are comfortable and support the driver in hard turns - with the advantage again going to the MR2, whose very-adjustable seats support the driver around the toughest of turns. The air conditioning is powerful, and the radios are good, but not excellent. There is little road noise, but the engines are relatively loud; the CRX is the quieter of the pair, overall.

The main difference between the CRX and MR2 is their character. The Honda CRX, a member of the Civic family, is a practical economy car at heart. The Toyota MR2, which seems to have been knocked off of a series of classic British roadsters, is a sports car throughout. The CRX has front wheel drive to maximize interior space in a very small car; the MR2 has rear wheel drive to deal with the terrific power from its turbocharged engine.

For better gas mileage, get the less expensive HF, which gets over 50 mpg. The HF and regular CRX have lesser suspensions, but most drivers won't notice the difference.

CRX traction and handling are excellent, and don't get worse as you go faster. It whips around curves, and it acts like an extension of your body - once you get used to it. Unlike the MR2, it may take a few days to get used to the CRX's handling. But, once you're used to it, you'll know that this is an unusually nimble car.

The CRX has tons of room for luggage or groceries, and everything folds down to make more space. There are places to put maps, sunglasses, etc. The control panel is, like the MR2's, excellent; and the lighting doesn't hurt night vision.

The most expensive 1991 CRX cost $11,035 with power sunroof, stereo/cassette, air conditioning, and many other options. It does not come with anti-lock brakes, airbags (until 1993), or passive restraint. On the other hand, it has a powerful, easy-to-reach horn and excellent visibility (rear visibility is hard to get used to at first, because of the shading of the hatch lid). The sunroof comes with an automatic air guard that makes it a pleasure to drive with.

The Toyota MR2 gives higher performance, at a price. From the base $15,000, one can add many overpriced options; the $225 spoiler blocks the rear window, but the $380 moon roof was good at preventing claustrophobia. Our test car ran over $19,000 - without a turbocharger. The moonroof does not open completely, but can, with difficulty, be removed. But you get a lot for your money. This car puts the more-expensive Thunderbird SC to shame, and should last far longer. While the gas mileage is only around 24 mpg (21 when driven hard), you can go from zero to 50 in 6.1 seconds, and from zero to 60 in 8.1 seconds; the turbo model is considerably faster. There seems to be some loss of front-wheel traction at 110 mph, but the car is still more controllable than most at that speed.

The MR2 has no place to put sunglasses or change. It has two trunks, but neither is large, and there's almost no room behind the seats, either. The mid-engine design makes it hard to maintain or repair the drive train, and requires a hump between the seats. Still, it's great to hear that engine roar behind the seat.

The MR2 feels solid, but not heavy. A driver's airbag is standard, and anti-lock brakes are optional.

If you can't afford the MR2, pick the cheapest CRX that can handle your driving style, and reap the savings of incredible fuel economy. If you can afford it, the choices are tougher. The MR2 is fun, but the CRX has lots of cargo space, good gas mileage, a durable body and engine, and a low price. The high-mileage CRX models let you save money and protect the environment while still having fun. You just can't lose.

Toyota wrote: “This mid-engine two-seater is bult to run to the tune of fun. Thrill to the feel of a twin cam 16 valve electronically fuel injected engine and four-wheel independent suspension. Top it off with a new T-Bar Roof model with Sport Seats that include a seven-way adjustable driver’s seat. ... This year especially, the MR2 gives you pure sports car fun at an affordable price.” The base transmission was a five-speed stick, supplemented by a four-speed electronic automatic.

(From Consumer Guide.) In March 1992, the 1993 models came out with suspension changes to avoid having the rear tires break lose around hard turns (a common rear-drive problem). To do this, Toyota lowered the MR2, put in higher spring rates and stiffer shocks and bushings, and lengthened the rear toe control arms; they also made the tires wider and moved from 14 to 15 inch wheels.

Performance was also enhanced by a larger front air intake, which may have helped the base engine gain 5 hp. Turbos got the T-bar roof standard, along with an eight-speaker stereo, air conditioning, cruise control, and power doors and locks.

In 1994, as per US Federal regulations, a standard passenger side airbag was included; minor suspension tweaks were made, and the tail-lights were updated. Standard air and a new spoiler went to the base model, and the non-CFC refrigerant to be required by law in 1996 was installed.

The final MR2 until a brief respite in the next decade only added power windows and locks to the base model.

Optional on our car were: