The Lexus LS started out as the F1 project in the early 1980s. The engineering team, headed by Shoiji Jimbo and Ichiro Suzuki, included 60 designers, 24 engineering teams, 1,400 engineers, 2,300 technicians, and 220 support people. They were already well into the design of a new, high-end luxury car when the first market research study in the United States was conducted for the project (in 1985). Jimbo himself attended focus groups and interviewed dealer, while a separate team of five people studied lifestyles and design concepts in Laguna Beach, California. Shortly afterwards,  in July 1985, the first running prototype was built. An incredible 450 running prototypes were to be made, with Toyota apparently sparing no expense to beat Mercedes and other luxury automakers.

By 1986, tests were being conducted on Germany's Autobahn and on American roads. Prototypes spent ten months being studied on American roads. In mid-1987, the final design was approved – after an unusually large number of presentations to management (eight). Roger Penske, who was to buy a Lexus dealership, traveled to Japan to test-drive one.

In November 1988, the F1 was finally given a name – though it was not particularly distinctive: LS400. The LS stands for Luxury Sedan, and 400 is the size of the engine. The LS400 debuted in the United States at the Detroit auto show in January, 1989, but was not produced until May 1989, and did not go on sale until September 1989.  The car was an immediate hit, much to the chagrin of Mercedes, whose S-Class was more expensive, less luxurious, and, it would turn out, less reliable. Like later LS models, it was made in Japan.

Only three months after the sale of the first LS 400, Lexus started a recall of 8,000 early models to check two minor problems – though there was only one complaint regarding one item, and only a few on the other.

Three years later, many said Lexus' LS had redefined its segment, but Toyota already had a revised model waiting in the wings, with over 50 changes based on dealer and customer requests. Only five years after the first model, in November 1994, a more extensive redesign took place. In September 1997, variable valve timing (VVTi) was brought to the engine, increasing its performance; styling was updated, and new features were added, but the price remained the same.

In October 2000, eleven years after the first LS400 was sold, the new flagship Lexus – the LS 430, with an enlarged engine – went on sale. New technologies included intuitive park assist, dynamic laser-guided cruise control (which could maintain a set distance as well as a set speed), heated and cooled front seats, and a rear-seat beverage cooler, and a Mark Levinson sound system. The LS430 would be revised in 2004, with a new six-speed automatic (2007 brought an eight-speed) and new luxury and safety features.

Each LS 400 was test driven before leaving the factory, helping it to earn its consistent place at the top of J.D. Power's quality awards. The 2000 models included new safety features, including Brake Assist and Vehicle Skid Control, which help to enhance braking and regain control when the car starts to skid. Thanks to a 290 hp V8 engine with gobs of torque, the LS 400 could go to 60 mph in 6.6 seconds, faster than many sporty cars - indeed, faster than Toyota's own MR2. Yet, gas mileage was 18 mpg in the city and 25 on the highway, thanks to variable valve timing and other technological advances. The automatic transmission had five speeds.

2000 models added high-energy discharge headlights as an option; Lexus had them remain level regardless of road or load conditions. The automatic climate control included a charcoal filter to trap dust and pollen, and a smog sensor to automatically recirculate the air when pollution was heavy outside. An in-key remote entry system ended the need for an outside fob. In a long-overdue bow to customer tastes, Lexus let the driver select the headlight turnoff delay and other details.

The leather and wood interior trim was hand-sanded and stained, in a three-week long process. A huge number of seemingly trivial details that add up to the luxury experience were listed by Lexus publicity materials, and no doubt contributed to the subconscious impression of the Lexus as a high quality sedan. The LS series won more awards than any other luxury car, and, more to the point, won J.D. Power's vehicle dependability survey every year it was eligible.

The LS 430 is powered by a 4.3-liter double overhead-cam V8 engine that produces 290 horsepower at 5,600 RPM and 320 lb.-ft. of torque at 3,400 RPM. Continuously Variable Valve Timing with intelligence (VVT-i) ensures excellent low- and mid-range power for easy highway merging.  The Lexus LS 430 can accelerate from zero-to-60 mph in 5.9 seconds, roughly the same time as the rougher Audi TT and Dodge SRT4. The LS 430 was one of the first gasoline V8 vehicles to be certified as an Ultra Low Emissions Vehicle (ULEV).

Though quite fast, the system was also smooth.  Working with the electronic throttle control (drive by wire), the system smooths out acceleration from a standing start by very slightly delaying throttle opening when the driver steps on the accelerator pedal. 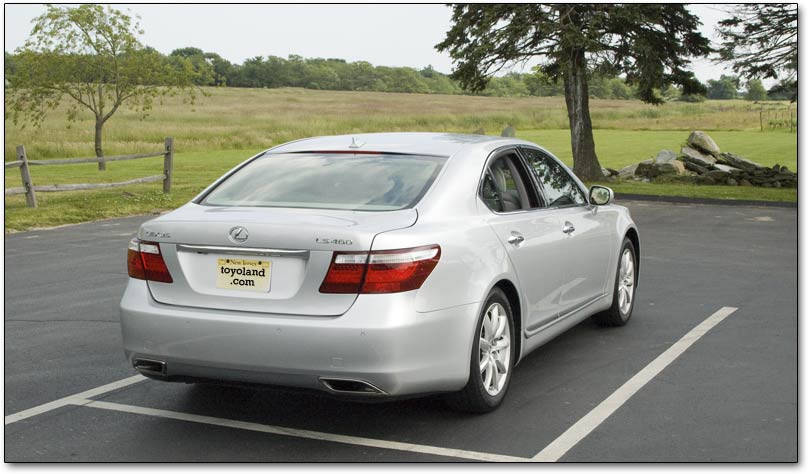 Lexus optimized the structure for crash-compatibility with other passenger vehicles as well as maximum safety for occupants.  Variable-force front airbags use sensors to determine the severity of a collision and, in turn, the force with which to deploy the front airbags.

In 2004, the LS 430 was equipped with the Pre-Collision System (PCS), which can help reduce collision severity and damage. The PCS uses radar to detect obstacles in front of the car and uses speed, steering angle, and yaw rate to see whether a collision is unavoidable.  If it is, the system can retract the driver’s and front passenger’s seatbelts and prepare the Brake Assist system, which, after the driver applies the brakes, automatically applies increased braking force to help reduce collision speed.

To deal with the damage caused by SUVs, side airbags have been redesigned to provide a greater coverage area, and the body structure has been strengthened to meet the latest side impact standards, which take into account higher-riding vehicles.  Front and rear side curtain airbags help provide protection in certain types of severe side impacts.  The LS 430 also features knee airbags for the driver and front passenger as standard equipment.

The LS 430 includes as standard daytime running lights, LED brake lights and rain-sensing windshield wipers.  Standard High-Intensity Discharge (HID) headlights come with auto-levelers and the Adaptive Front lighting System (AFS), which illuminates a turn or curve as the driver steers into it.

Four-channel, four-sensor anti-lock brake system (ABS) is standard, while electronic brake-force distribution (EBD) optimizes braking pressure at each wheel to help minimize body dive or sway during hard braking and cornering.  Brake Assist is designed to determine if the driver is attempting emergency braking and, if the driver has not stepped firmly enough on the brake pedal to activate the ABS, it applies maximum braking pressure until pedal pressure is released.

A Tire Pressure Monitor (TPM) can detect if a tire is significantly under-inflated and alert the driver with an indicator light on the instrument panel to a condition that could potentially lead to uneven tire wear or a loss of control.

Interior of the Lexus

The LS 430 offers three wood finishes and five leather interior colors, allowing customers to tailor the car to their tastes. Adjustments for the front seats (14-way for driver, 10-way for passenger) include dual lumbar controls and adjustable cushion length for more comfortable thigh support for the driver, as well as a single lumbar control for the passenger.

The standard wood/leather-wrapped steering wheel features easy-to-use controls for the audio system, which includes a standard in-dash, single-feed six-disc CD changer, and a 15-function information display with a trip computer and compass.  The climate control uses temperature and sun-sensing intelligent swing registers.  If sunlight is concentrated on one side of the car, the registers automatically deliver more cooling air to that side.  A power moonroof and power rear sunshade, as well as rear seat vanity mirrors, also are standard features.

The available Dynamic Laser Cruise Control system is designed to maintain a set distance from the vehicle traveling in front of it.  (Models equipped with the Pre-Collision System instead use radar-based dynamic cruise control.)  When parking, the available Intuitive Parking Assist system uses ultrasonic sensors to alert the driver to obstacles at the front, rear and corners of the vehicle.

The available rear air conditioner features an optical deodorizer in addition to a particle filter.  The unit uses a catalyst-coated filter and an ultraviolet light to help break down odor-causing elements.

A rear backup camera provides an extra margin of confidence when reversing.  Available in conjunction with the optional navigation system, it automatically projects an image of what the camera lens can detect behind the vehicle onto the navigation screen when the vehicle is in the reverse gear.

The LS 430 is one of several Lexus models to offer a high-end Mark Levinson premium audio system. All occupants enjoy optimal sound quality, no matter where they are sitting.

As with all Lexus vehicles, the LS 430 comes with a 48-month/50,000-mile basic limited warranty with roadside assistance for 48-months/unlimited miles.  Powertrain and restraint system coverage is provided for 72 months/70,000 miles.  Corrosion perforation protection is covered for 72 months, regardless of mileage.

Arriving after the LS430, the LS460 is powered by a similar engine with larger displacement and variable valve timing that affects both intake and exhaust valves; the result was a stunning 360 horsepower and 367 pound-feet of torque from the small V8, coupled with V6-like gas mileage of 19/27 mpg (18/27 on the LS460 L). 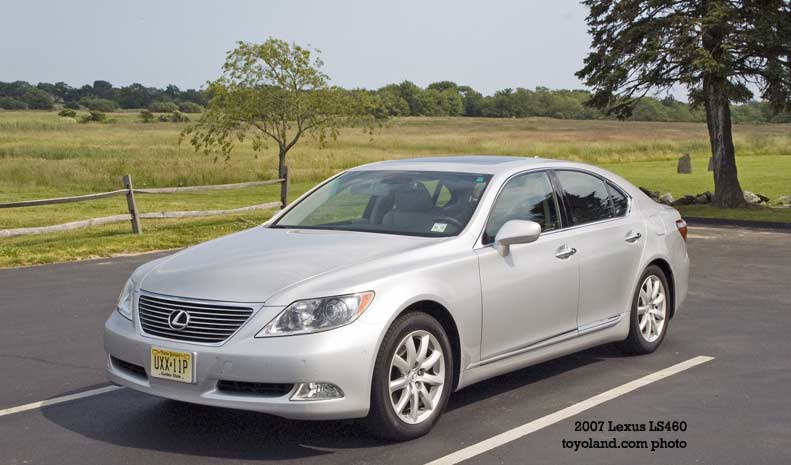 Lexus 430 and LS460 specifications and such