The 1983 Cressida and Celica Supra were the first cars to get a new 2.8 liter V6. This modern powerplant had twin cams and electronic fuel injection, and produced a hefty-for-the-time 150 horsepower at 5,200 rpm and 159 lb-ft of torque at 4,400 rpm. In the Supra, it was paired with a five-speed manual transmission.

In 1988, Toyota introduced two new V6 engines for truck use; the first, used in the 4Runner and pickups, put out a V8-like 145 horsepower and 180 lb-ft of torque, thanks to electronic fuel injection, overhead cams, and a tuned intake manifold. The second, used in the Land Cruiser, pumped out 155 hp and 220 lb-ft of torque from four liters, allowing a maximum towing capacity of 7,000 pounds.

The GR engines were a series of V6 designs which replaced inline six-cylinders as well as the old VZ and MZ V6 series; they were launched in 2002 and continue to be used to this day. They are shared by Toyota and Lexus, but Lexus tunes them for higher power from premium fuel.

All the GR engines are open-deck designs, with a 60° V-shape, die-cast aluminum blocks, and aluminum heads; timing is via dual overhead cams. All the engines have four valves per cylinder, with forged steel connecting rods for durability. The intake manifold is cast aluminum, too. Fuel injection is always multiple-port, with some having the D4 or D4-S direct injection system. 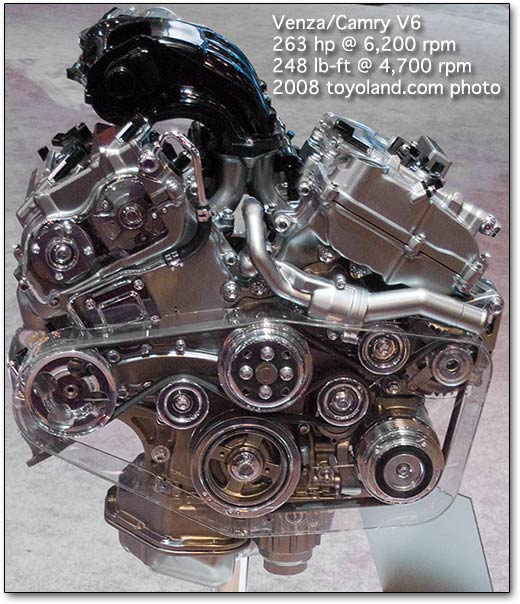 The 2GR was launched in the 2004 Avalon, and was rated, over the years, at 295 to 315 hp, with torque of 248 to 260 pound-feet on regular fuel. It had variable valve timing on both intake and exhaust cams, driven by a timing chain. The valves had a clever concave cam lobe, which increased valve lift more than the 1GRE’s system could. The engine itself weighed 359 lb.

The 7GR had the D-4S direct-and-port fuel injection system, keeping the dual variable valve timing setup; power was 276 hp and 269 pound-feet. It was used starting in the Chinese 2016 Land Cruiser Prado and the 2019 HiAce.

The 8GR has two versions, FKS and FXS. The main attraction to both of these engines is the ability to go into an Atkinson cycle when needed, making it deal for hybrid-electrics. The 8GR-FKS is used only on the Lexus LS350, and is good for 311 hp and 280 lb-ft; the 8GR-FXS is good for 295 hp and 260 lb-ft, and is used on the Lexus LC and LS, and the Toyota Crown.

2001-2005 models including the Highlander and Sienna (2004-2005 only) may have a ticking noise coming from the fuel injectors while idling. This noise is harmless, but can be solved by the dealer using an updated fuel main tube and a second fuel pressure pulsation damper. It's covered by the 3/36 warranty.