The culmination of fifteen years of development and the production of over 400,000 dual-overhead-cam engines, the 5M-GE engine started out in 1982 Toyota cars with 145 horsepower. It quickly gained efficiency and power, ending up with 175 hp; the engine was known for instant response, thanks to computer-controlled electronic fuel injection and unique hydraulic lash adjusters that kept valve clearance to zero (Toyota’s first use of hydraulic lifters). The cams were driven by fabric/rubber timing belts. 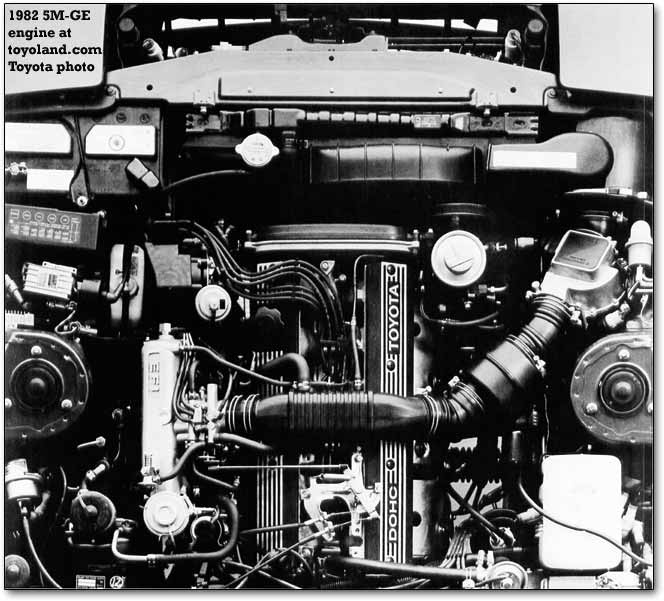 The 2.8 liter engine had hemispherical combustion chambers, which allowed for a cross-flow head (intake valve on one side, exhaust on the other), and a central spark plug location; the design was similar to the monster Chrysler Hemi engines that had been discontinued a decade earlier.

An otherwise standard V6 design, the 5M-GE had two valves per cylinder (in keeping with the hemispherical-head design), activated by dual overhead cams, driven by a belt drive. The engine was only used in the Supra and Cressida.

In 1982, when the 5M-GE was introduced, Toyota was the world's largest maker of DOHC engines (their R-series four-cylinders had also been adapted to have twin cams). They put the camshafts in the 5M-GE on either side of the engine, directly over the valve system, reducing weight and allowing higher revving and quicker response. The gain in power over the 1981 engines was a hefty 25%. Engine noise was reduced by using timing belts instead of chains. 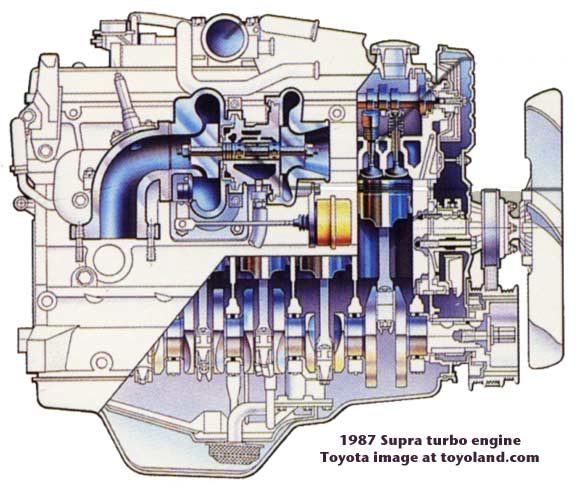 As with most engines of the time, electronic ignition eliminated points and condensors, but the 1982 cars had a vacuum-advance distributor. The 1983 cars controlled timing advance electronically, boosting U.S. horsepower ratings to 150 (the company also switched from round to D-shaped intake runners, altered the computer, control, refined the exhaust system, and boosted the compression ratio).

For the 1984 Toyota cars, the original dual V-belt “fan belts” were replaced by seven-rib serpentine belts; the camshaft belt went from square to round tooths; the compression ratio was boosted; a knock sensor was added to deal with substandard fuel; intake runners were modified; and the oil pan was deepened. These changes brought the rating to 160 horsepower. The alternator was also dropped from 65 to 60 amps. Other changes boosted power to 161 hp in 1986 cars, and to 175 hp in the 1987 cars.

The 5M-GE was part of a family of engines known as the “M” engines, starting in 1965 and ending in 1992. They were made in single and dual cam versions, went up to 110 gross horsepower to 267 net horsepower, had either carburetors and fuel injectors, had turbo models, and ranged from 2.0 liters to 3.0 liters.