The 4A engine series was a 1587 cc (1.6 liter) engine, introduced in 1988, and revised to 4A-FE in 1993; it was mainly used in the Corolla, and was replaced by the ZZ series in the 1998s. The 7A engine series was essentially the same engine, stroked for higher displacement (1.8 liters) and better torque.

The torque curve was fairly flat, with a steep, linear horsepower curve.

In 1993, the 4A-FE was given better intake efficiency through use of upright, small-diameter intake ports in the cylinder head, increased valve lift and intake valve diameter; a rotary solenoid type idle air control valve; and a large aluminum stiffener and vanadium-steel crankshaft to reduce noise and vibration. 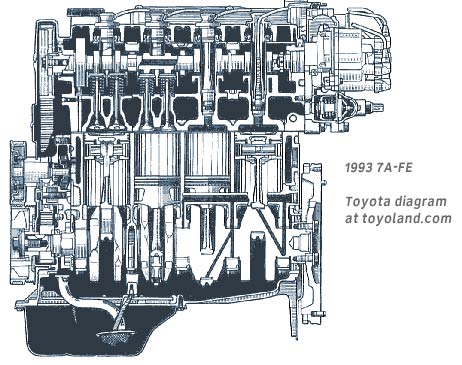 When the 7A-FE was designed, it was given the same improvements as the 4A-FE, as well as a knock sensor. Both engines shared a pentroof type combusion chamber, with cross-flow manifolds.

At the same time, one of the five original engine mounts in the Corolla was dropped, leaving four; but the right-side engine mount were revised, to a cylindrical, shaft-type liquid-filled compound type to reduce vibration and noise.

Unique to the 7A-FE were two-layer metal head gaskets, and a two-piece oil pan (one piece of aluminum alloy, the other of steel; the upper pan was secured to the cylinder block and transaxle housing). The crankshaft and connecting rod specifications were modified to match the longer piston stroke and higher power output of the 7A-FE engine, and the pistons were made more rigid by modifying the oil return from the slits to 8 holes.

The valve details were also changed to match the improved performance. The intake diameter was increased from 30.0 to 31.0 mm, the exhaust kept the same size at 24.5 mm, and the lift increased from 6.6 to 7.6 (both intake and exhaust). 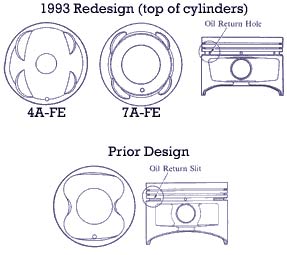 The shape of the exhaust manifold was changed to match the newly-adopted WU-TWC manifold converter.

In addition to a knock sensor, the 7A-FE had a torque management feature which cut torque while the automatic transmission shifted to minimize harshness.

The fuel injection system was changed from a somewhat inefficient all-firing-at-once system to a more modern two-at-a-time system, now just one step away from sequential injection. Timing was changed so that the intake closed at 38° ABDC instead of 34°, exhaust opened at 42° instead of 37°, and exhaust closed at 2° ATDC instead of 3°. Intake valve opening remained at 6° BTDC as it had been in 1992. 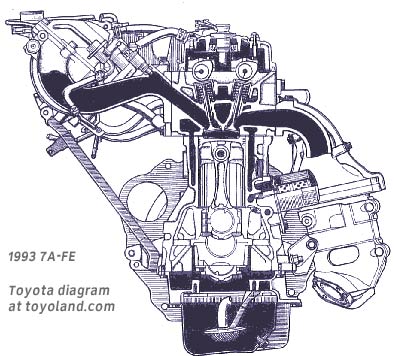 A plastic region-tightening method was used for cylinder head bolts to eliminate the need for periodical inspection of bolts.

Along with the revamping of the intake system, the two resonators in the air cleaner hose were cut to one.

The newly-developed liquid filled compound mount had an insulator filled with a fluid. The fluid inside the fluid chamber reduced the dynamic spring modulus in the high-frequency vibration range and thus increases quietness in the passenger compartment. The flow of fluid within the orifice increased the damping coefficient and thus suppressed engine vibration.

The cooling system reached the bottom of the intake port first to reduce intake air temperature, improving knock resistance and efficiency. There was originally a cold-start injector in the 4A-FE, but this was eliminated in 1993.