XSE added 2/7/2020. Has it been four generations already? The first Highlander appeared in 2001, and 19 years later, the fourth generation has arrived, in the usual gasoline and hybrid versions. Like the first true mass-appeal SUV, the Jeep Cherokee XJ, the Highlander had a unibody setup; unlike the Cherokee, it had a four-wheel independent suspension and was based on a car, the then-best-selling Toyota Camry. It was a time when Subaru had shoved its Legacy wagon up a bit and called it a crossover, the Outback, taking a niche vehicle and turning it into a hot car. What Toyota had in the Highlander, though, were two major advantages: comfort and a reputation (backed up in reality) of quality and reliability. Later, with the hybrid version, it added impossibly good fuel economy.

Giving up any pretense of off-roading, in a segment where hardly anyone drives on anything rougher than gravel, paid off in comfort and efficiency, and the Highlander has been America’s best-selling (at retail, excluding fleets) midsized crossover from 2016 through 2019. With the 2020 model, the Highlander joins the Camry, Corolla, Prius, and RAV4 on the new Toyota global architecture. Gas mileage is 24 mpg (combined) with the powerful V6 engine, and 36 mpg (combined) with the hybrid.

The fourth-generation Highlander is 2.36 inches (60mm) longer in the cargo area; the second row slides an extra 1.2 inches further up for third-row legroom. Having more high-strength steel makes the Highlander stiffer than the previous model, allowing for better tuning for the suspension for agility, ride, and a smaller turning circle. It is, in short, more agile, more comfortable, and quieter than ever. The front “wishbone” suspension uses MacPherson struts while the rear is a multi-link setup; there are stabilizer bars front and rear.

The 295-horsepower 3.5-liter V6, also seen on the Camry and Avalon, uses “D-4S Injection”—direct fuel injection with port fuel injectors, coupled with intelligent variable valve timing of intake and exhaust valves. Torque is rated at 263 lb.-ft. The 8-speed automatic transmission, with an exceptionally wide range, provides strong launches with good highway mileage. The engine has a stop/start system for better mileage, cutting the engine at full stops when possible and restarting when the brake pedal starts to lift. 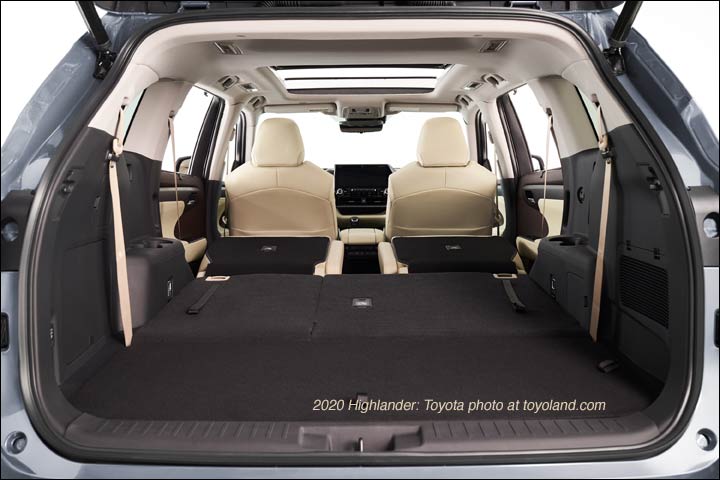 The hybrid uses a 2.5-liter dual-cam four-cylinder engine with two electric motors; it has electric motor-assisted variable valve timing on the intake camshaft, and intelligent variable valve timing on the exhaust camshaft. A variable cooling system (electric water pump, electric thermostat) and a fully variable oil pump further improve engine efficiency. The end result is 243 total system horsepower and up to 36 mpg, combined, 24% better than the prior generation's 29 mpg rating. What's more, it's available in front or all wheel drive.

The transaxle now has the electric motors in a coaxial arrangement, rather than in-line, reducing frictional losses. Both motors can charge the battery. The reduction gear has moved from being a planetary to a parallel shaft gear to save space, and a new multi-function gear integrates the power-split planetary ring gear, parking gear, and counter-drive gear. New computer integration and a smaller, lighter power stack installed directly above the transaxle reduce energy transmission losses. The battery pack is small enough to be installed under the rear seats, so it does not take up any cargo or passenger space.

The Highlander hybrid lets the driver select between normal, economical, and sport modes, with a full-battery mode for low-speed driving. The system allows the illusion of sequential shifting, using regenerative braking.

With the gasoline L, LE and XLE, the optional AWD system can send up to 50% of available torque to the rear wheels to counter wheel slip when necessary. The Limited and Platinum boast dynamic torque vectoring, using couplings to actively manage left/right torque distribution; the system doesn't wait for wheels to slip, but uses a computer which manages power steering, throttle, the transmission, and drive torque distribution. A multi-terrain select dial lets the driver pick the best program: mud and sand, rock and dirt, or automatic. The display shows real-time torque allocation and slip control.

Other features include hill-holding, trailer sway control, and downhill assistance. The rear driveline is disconnected when front wheel drive is all that's needed (not a particularly new feature).

The hybrid system uses a separate rear-mounted electric motor to power the rear wheels when needed. It can send more driving force to the rear wheels, e.g. to prevent front wheel slip on launch.

Buyers may also be able to get blind spot monitoring, rear cross path alerts, auto park-braking, and intelligent clearance sonar, if they buy a high enough trim level (the base model is L, moving up through LE, XLE, Limited, and Platinum; the Hybrid has the same grades except L.) How to tell the models apart? The lower grades have a black grille with silver trim, while Limited and Platinum have chrome grille trim and chrome-plated lower rear fascia. They also have better headlamps and 20-inch alloy wheels, a first for the Highlander. The Platinum comes with a silver-painted front bumper and rear fascia, and unique wheel design.

Inside, L and LE buyers get Graphite (dark gray) or black cloth; the XLE has embossed Softex® artificial leather in beige, gray, or black. The Limited uses perforated leather in the same colors. Platinum has embossed, perforated leather trim in those colors and Glazed Caramel. The L and LE grades come with a second-row bench (8 passenger); the XLE and Limited grade come with a captain’s chair second row, with the bench optional. Platinum only comes in 7-passenger form.

The 2021 Toyota Highlander, the first Highlander to get the XSE badge, is between the XLE and Limited. It has the V6 and front or all wheel drive, but swaps in higher-rate springs, a different rear stabilizer bar, lower friction shocks, and retuned power steering. It has a unique front fascia, grille, lower spoiler and intake (integrated into the new bumper), headlamps (with black accents and light-strip DRLs), and rocker panels. It also has the first exposed dual-tip exhaust on a Highlander, with black roof rails, mirror caps, and window moldings. The interior uses black Softex seats with fabric inserts, and carbon fiber finishes on the dash, with an optional red-and-black-leather interior. The 1200 watt JBL sound system is standard. Toyota expects 12% of buyers to get the XSE.

Sound-damping materials have been optimized, focusing on the frequencies that interfere with conversation. Limited and Platinum grades have laminated front side window glass.

All grades come with Apple Car Play®, Android Auto, Alexa, Waze, SiriusXM®, and Wi-Fi, along with a year subscription to Toyota Safety Connect. All but L get Service and Remote Connectivity while XLE brings optional Dynamic Navigation (standard on Platinum).

A new 12.3 inch touchscreen, meeting or beating the best of most competitors, is standard on Platinum; other models get 8-inch screens. A 1,200-watt JBL sound system with Clari-Fi® is standard on Limited and Platinum.

Toyota’s typical outstanding value is clearly evident in the Highlander L grade, where the standard equipment list includes features that one might expect in an upgraded model:

How far have we come? See our 2010 Highlander Hybrid writeup/review