The Toyota FT-HS hybrid sports concept, introduced at the 2007 North American International Auto Show, uses a hybrid-electric powertrain to get 0-60 times of around four seconds. A powerful V6, 3.5L-engine is coupled with a 21st century sports hybrid system with a target power output of approximately 400-horsepower. At a mid-priced market position, FT-HS would be a true "attainable exotic" with 21st Century performance. 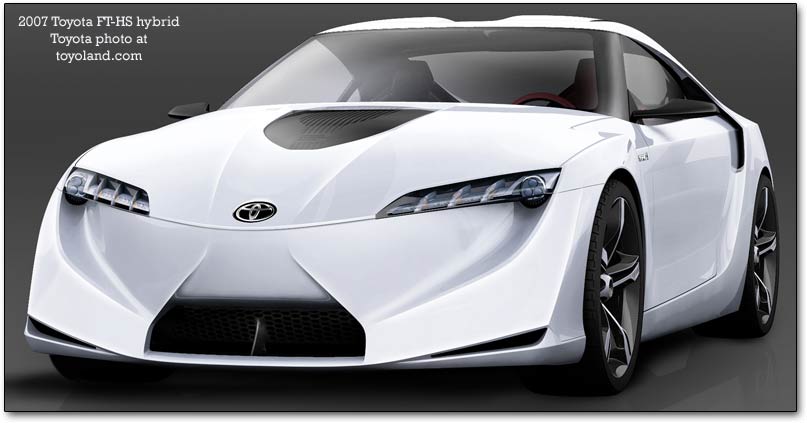 The FT-HS incorporates hybrid capability while maintaining sports car essentials, such as a sleek profile, lightweight aero-dynamic materials, and an advanced high-output powertrain for revolutionary acceleration and optimal performance. The FT-HS appeals to an emerging buyer who grew up eco-conscious and perceives technology as a necessity, not a luxury. FT-HS expresses the core values of a Toyota Brand design strategy that combines two key elements: J-Factor and Vibrant Clarity. J-Factor refers to the local and global acceptance of Japanese-inspired design and cultural sensibilities. Vibrant Clarity is the design language used to express the J-factor much in the same way that L-Finesse is the language of the Lexus Division. It is the combination of perfect imbalance, freeform geometrics and integrated component architecture. The result of these three elements is subtractive mass, a minimalist style that is not only lightweight, but also looks lightweight. 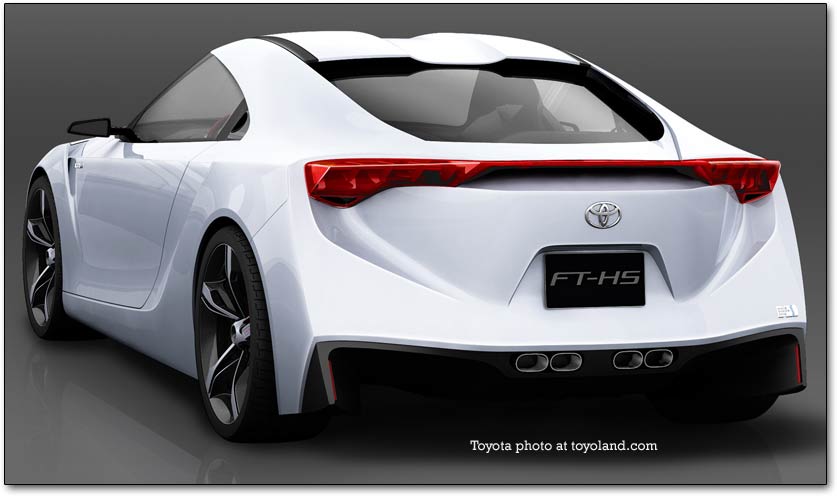 The exterior design was led by Calty designer, Alex Shen. From a design perspective, the theme of the FT-HS achieves sleek, taut surfaces in its exterior features – especially in the doors and body style. The front and rear have been sculpted to remove mass around key functional components. Freeform geometrics define the integration of fluid surfaces contrasting hard-edge "Aero-Corners" which promote smooth airflow and reduce turbulence.

The roof has a distinctive scooped-out section designed to reduce aerodynamic drag and provide head room at the key areas. Made from carbon fiber Kevlar, the roof retracts so that the roof panel and back window pivot fluidly in a downward motion to stow in the rear seat space.

The vehicle's triangular profile has a floating "C" pillar, aero corners, a full upper-body pan, and innovative open top. A hood features a scalloped channel, exposing the hybrid engine. Integrated component architecture can be seen in the aerospace-inspired lighting. The tail lamp unit spans the entire rear, and has an integrated retractable spoiler. Light-emitting diode (LED) clusters are located in the headlamps and the wing for energy-efficiency and decreased heat loss. Other exterior features include a speed-activated wing that elevates at high speed for additional stability and traction. The rear showcases a carbon fiber lower diffuser with integrated wide exhaust and carbon fiber wheels.

The driver-oriented interior was created by Calty designer, William Chergosky and exudes sleekness, technology, and performance. The lean skeletal look is achieved with exposed cross-car architecture and high-tech materials such as carbon fiber, and titanium. FT-HS' interior features create a dedicated driver's cockpit which include subtractive mass expressions such as cross-car instrument panel structure and delta wing driver pod. The delta-wing driver's pod integrates many useful functions into a lightweight structural unit. All of the important functions and details are presented almost exclusively to the driver. For example, touch-trace sensors which surround the driver and act as tactile guides for finger controls when traveling at high speeds. 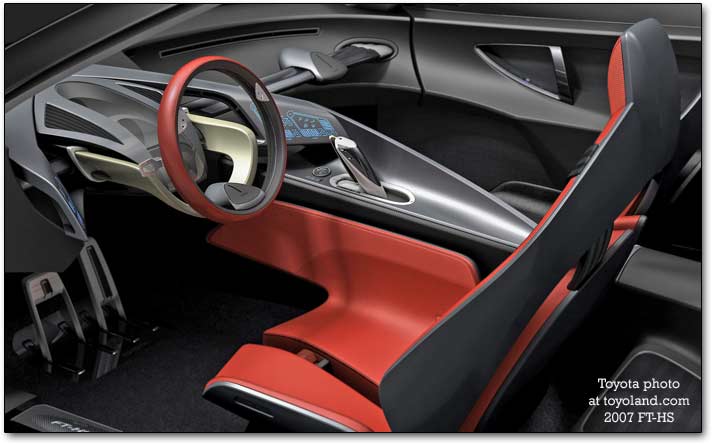 By eliminating the "B" pillar and creating a suspended "C" pillar, the minimalist style works in conjunction with subtractive mass. An integrated instrument panel surrounds the driver, creating an enclosed pod effect. Armrests flow seamlessly into the door and surrounding interior.

Seating is optimized for a lightweight appearance and function: the seating accommodates four and then coverts to a two-seater when the roof retracts. The passenger-seat area is open with a simple exposed airbag on the cross-car beam.

A telescoping hub-less steering wheel incorporates semi-automatic paddle shifters and allows the meter to be shifted forward in order to shorten the driver's focus-time between the road and meter, and ultimately enhance driver focus.