Toyota Yaris: the Echo under its real name

The Yaris was a sales leader in Japan and Toyota’s best seller in Europe even as a version of it, the Echo, was sold in the USA. The 2007 Toyota Yaris, a newly redesigned version, replaced the Echo in the US; the subcompact (“B class”) car was sold in two and four door liftback forms and as a four-door sedan, more variety than the Echo.

The 2020 Toyota Yaris Hatchback has a 1.5-liter four-cylinder engine that delivers 106 horsepower, hooked up to a 6-speed automatic transmission with a sport mode; it’s estimated to achieve 40 MPG on the highway. There are just two lines, LE and XLE; standard equipment on any model is incredibly generous, with 16-inch alloy wheels, heated power side windows, fog lights, intermittent wipers, seven-inch touch-screen, pushbutton start, and chromed tailpipe. New for 2020, Toyota gave up on making its own U.S.-spec Yaris and is simply basing theirs on the Mazda2; it's built by Mazda in Mexico. 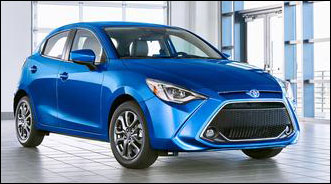 To sweeten the deal, the Yaris won’t be an econobox: it has Toyota’s sporty new platform and tuning, standard Apple CarPlay and Android Auto, a 7-inch touchscreen display, Bluetooth, voice recognition, six speakers, and two USB ports. There will be just two grades—the base models are gone! Buyers can get the “Luxury Edition” LE or “Extra Luxury Edition” XLE only. Standard equipment is to “defy segment expectations.”

Styled in Europe, the 2007 Yaris had better handling and a lower center of gravity, thanks to new, longer and wider platform. The Yaris had a drag coefficient of 0.29 — better than the 1980s Celicas and Supras. The frontn suspension, not surprisingly, used MacPherson struts; in back, a torsion-beam design kept costs low. 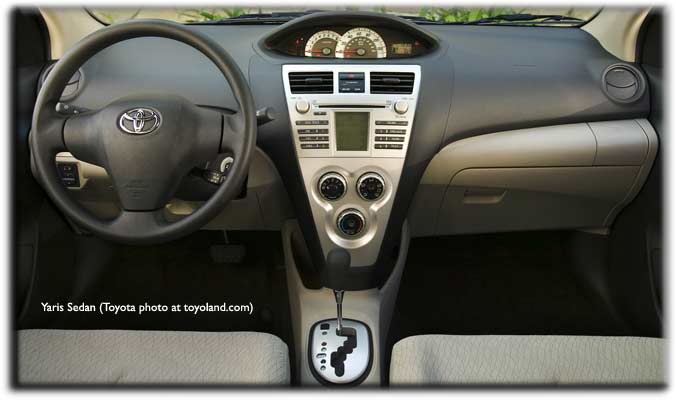 While the Echo was clearly bare-bones, the Yaris was styled to look more upscale, with a larger instrument panel and a larger center stack taking away from the massive expanses of bare plastic. Standard features were laid on generously rather than held back to the point of excess.

The Yaris Liftback had one grade, while the Sedan had a base model and sport-themed Yaris S.

Yaris Liftback was styled at Toyota’s European design studio and Toyota Motor Corporation (TMC) Design Division. Both the Sedan and Liftback feature class-up styling, and a new level of refinement, sophistication, and fun-to-drive experience to the entry subcompact segment. Both Yaris configurations ride on a new platform that is longer and wider than its European predecessor, and will be the basis for a wide variety of future vehicles.

The Liftback features has short overhangs and a low center of gravity with color-keyed door handles and rear view mirrors. The front features a chrome-trimmed front grille centered between sharp character lines, which are integrated into its aerodynamic hood and windshield. Outer molding has been eliminated from the windshield and door glass to help enhance aerodynamics and reduce wind noise. The rear has large taillights and a wide rear door for easy and ample cargo area access.

The Yaris Sedan has a long stretched cabin with an arched beltline and its tires pushed outward at each corner, with integrated bumpers and headlamps as well as a low center of gravity. Like the Liftback, it features a “T” face grille, which emphasizes the Toyota identity. In the rear, the taillights are bookends to a wide trunk that extends down to the bumper molding for easy trunk access. Both the Liftback and Sedan will ride on P175/65 R14 tires with steel wheels and full wheel covers and offer available 15-inch steel or aluminum alloy wheels.

The Yaris S Sedan is designed to appeal to buyers looking for sporty styling. Side rocker panels, front and rear under bumper spoilers, 15-inch steel wheels and available aluminum alloy wheels give the Yaris S a more aggressive appearance.

The interior has four-way adjustable fabric front seats and reclining rear seating for three with headrests in all seating positions. The rear seats also fold down, providing nearly 13 cubic feet of cargo space. Audio and climate controls are easy to reach, and storage spaces include a center console with built-in storage, and cupholders in the front and rear. The instrument cluster is center-mounted, high on the dash, as in the Echo.

With the longest wheelbase among key competitors, the Yaris Sedan interior conveys a feeling of spaciousness and refinement not usually found in a subcompact. The front dash is designed with center-mounted instrumentation, which is integrated with a stylish silver-painted center console. Storage and cupholders are in abundance, front and rear. Like the Liftback, the Sedan has rear seating for three with headrests in each seating position. Standard on the Yaris S and available on the Sedan are 60/40 fold down rear seats with a fold-down center armrest and cupholder. Folding the 60/40 split rear seats enlarges the trunk capacity, providing nearly 14 cubic feet of total cargo space.

All Yaris models with an automatic transmission have uphill/downhill shift logic to help reduce the frequency of gear shifting caused by the operation of the accelerator pedal during winding uphill and downhill driving. Fuel efficiency is among the highest in the subcompact segment. The EPA fuel economy mpg ratings are 34 city/40 highway for the five-speed manual and 34 city/39 highway for models equipped with the four-speed automatic. Yaris was EPA-certified as an Ultra-Low Emission vehicle (ULEV II).

Yaris rides on a strong, stiffer chassis thanks to a newly developed suspension that includes a rigid L-arm MacPherson strut front and rear torsion beams. The stiff suspension and retuned steering gear ratios help to deliver fun-to-drive handling and excellent maneuverability with a class leading turning radius. As one example of Toyota’s focus on continually improved production techniques, a new hydroformed torsion beam in the rear suspension provides necessary anti-roll stabilization, eliminating the need for a separate anti-roll bar.

The new Yaris protects its occupants with a reinforced cabin using front and rear crumple zones and energy-absorbing materials on the roof and doors. Yaris will be equipped with height adjustable headrests and three-point seatbelts in all five seating positions. The front seatbelts include pretensioners and force limiters. The rear seat will be equipped with the Lower Anchors and Tethers for Children (LATCH) uniform child restrain anchorage system.

Safety is also addressed with standard driver and passenger advanced dual-stage front airbags that inflate at a higher or lower speed, according to collision severity. A front seat passenger sensor is designed to determine if there is a person in the seat as well as the person’s weight category to determine whether the airbag should inflate and at the correct inflation power. Front-seat-mounted side airbags with first and second row roll-sensing side curtain airbags will also be available.

All Yaris models offer anti-lock brakes (ABS) as an option.

Yaris options include ABS, driver and front passenger seat-mounted side airbags and side curtain airbags and cold area package. A convenience package is standard on all Yaris S and available on the Sedan and Liftback. The convenience package adds an AM/FM CD player with MP3 readability and universal mini-jack port, a rear defogger, 15-inch steel wheels with full wheel covers, a 60/40 folding rear seat (Sedan only) and a rear wiper (Liftback only).

Also available on Liftback, Sedan and S Sedan is a Power Package offering power locks, windows, and mirrors, AM/FM/CD with MP3 capability and audio mini-jack, rear defroster and 15-inch steel wheels with cover. For the Sedan, it also includes a tachometer (standard on manual transmission models), upgraded trim with integrated audio, cruise control, and ABS. For the Liftback, it adds a 60/40 split rear seat that slides, reclines, and folds completely flat.

Toyota’s 36-month/36,000-mile basic new-vehicle limited warranty applies to all components other than normal wear and maintenance items. Additional 60-month warranties cover the powertrain for 60 months/60,000 miles and corrosion perforation for 60 months with no mileage limitation.

I test drove both 2007 Yaris models with automatics, with combined driver and passenger weighing about 350 lb, and air conditioning on. Both models were sluggish on a 45 degree straight uphill; after 10 feet, and going to medium/half throttle, the transmission finally fell to 2nd to mantain 30 MPH up. However, they were surprisingly capable in passing maneuvers on 75 MPH freeway traffic on a 30 degree uphill. Its electric power steering is responsive, but gives somewhat muted road feel. Squeezing the accelerator wasn't a jerky affair with a 2.847 1st gear, and 4.237 final gear. What's unfortunate is the lack of standard side airbags.

The 2001 Yaris (sold as the Vitz in Japan) had a five-speed manual transmission with Toyota's usual light clutch, with a four-speed automatic as an option; the four-speed automatic shifted nicely, but the huge gap between third and fourth gears meant quite a bit of noise when it downshifted. Gas mileage ran to nearly 40 mpg in combined driving; as with the same-year Corolla, the air conditioner was fairly weak but also placed few demands on the engine. The Yaris put the driver fairly high, relative to other vehicles.

The Yaris came in different versions; the Verso hatchback was a people-mover, with four wide-opening doors and front-to-back grab rails inside, so it was easy to enter and exit. The rear hatch was quite low to the ground for easy loading, and the rear door itself was hinged on the side to avoid head-banging (and eliminate the need for those hydraulic devices that seem to fail after a few years.) The seats folded in an unusual fashion: they were stored underneath the front seats when folded, providing much more loading space than a traditional configuration. A clever parcel shelf was suspended from poles in the back, but its usefulness, like so many adjustable-height shelves, was somewhat limited in practice, and the whole contraption was prone to rattles. As with other Toyotas, a large number of little storage places are provided, including one to the left of the driver in the dash.

Verso visibility was good in all directions, with bright, well-focused headlights. The gauges were stored in the center, lowering costs for Toyota - a single dashboard was used for Japan and Commonwealth markets along with the rest of the world. The seating position was a bit low in the tall car, which admittedly maximizes headroom.

The TRD version used the Echo's engine to achieve 108 hp at 6,000 rpm. The low weight made the car relatively speedy, despite its small horsepower rating.

The general feel was light and nimble; the Yaris Verso was not sports-tuned, but it was comfortable enough and cornered fairly well. The Verso came off as a well-designed, reliable appliance that seated four people in some comfort with room for cargo, which is all most people really and honestly want in a car — well, that and perhaps a macho or sexy or luxury image. But for those who are comfortable in their world, and who fulfill their ego needs in ways that do not involve wasting fuel or money, and who do not feel any desire to drive "in a spirited manner," the Verso filled the bill nicely.