A general history of the Starlet

The small Toyota was beloved by many owners, but had (for Toyota) a relatively short lifespan in the United States, running from just 1981 to 1984; referred to as a microcar outside of the US, the Starlet was actually made starting in 1973 to 1999, a typically long run. The American version had rear wheel drive, a four-link rear suspension, and a MacPherson strut front suspension with plastic-lined front fenders to prevent rust. The Starlet moved to front wheel drive in 1984, but Americans were moved on to the Tercel.

Originally sold as the Publica 40, the Starlet started out in 1973 with 1.0 and 1.2 liter engines, with two-door sedan and two-door wagon models; a four-door sedan arrived late in 1973. Trim lines were standard, deluxe, Hi-Deluxe, ST, and SR. The Starlet/Publica was rear wheel drive until 1984.

1978 brought the “60 series” (KP60), the model known to Americans. The Starlet KP60, still sold as a Publica in some areas, added a 1.3 liter four-cylinder to the original engine mix. Buyers nearly everywhere could get two and four door hatchbacks, with some having a four-door wagon option. Trim lines were cut back to Standard, DX, XL, S, and SE.

In 1980, the grille was updated for the de rigeur square headlights affecting just about every car of the time, despite their higher cost and lower utility. In 1981-82 American models, the 4K-C engine was used; in 1983-84, the similar 4K-E.

The electronic fuel injection system used starting in the 1980s increased both performance and fuel economy. A microcomputer precisely controlled fuel flow and had diagnostic capabilities. 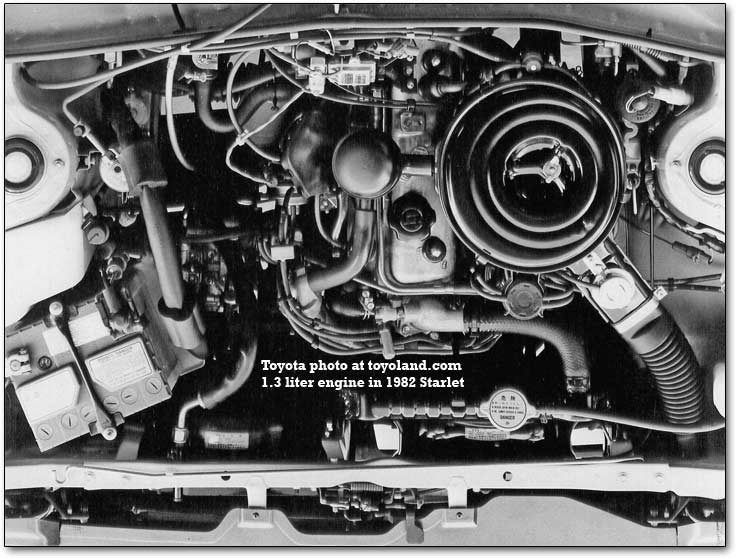 The first year for the Starlet in the United States was 1981, when Road & Track called it the “commuter car for the 1980s.”  During its brief stay in the United States, the rear-wheel-drive, 1.3-liter-engine Starlet liftback was billed as “cheap to keep” with stunning gas mileage (38/52) and strong reliability, especially for its price class; it included electronic ignition, a five-speed stick-shift, rack and pinion steering, comfortable seats, and good cargo capacity (23 cubic feet with rear seats folded) aided by a temporary spare; steel belted radials were standard along with power disc brakes.

Its 1.3 liter engine helped it to get high mileage, while low weight kept it from being a “dog.” Black urethane bumpers weathered well and were cheaper and lighter than chrome; an aerodynamic roof lip kept rain from dripping on passengers as they got in, but presented little wind noise. Front fender liners were used to prevent rust, and the rear window pushed out rather than rolling down to keep prices down. Like most new cars in 1981, the Starlet used an electric fan, then being phased into most companies’ product lines; it also used visible reservoirs for easy maintenance. A slight spoiler on the trailing edge of the roof reduced wind resistance. 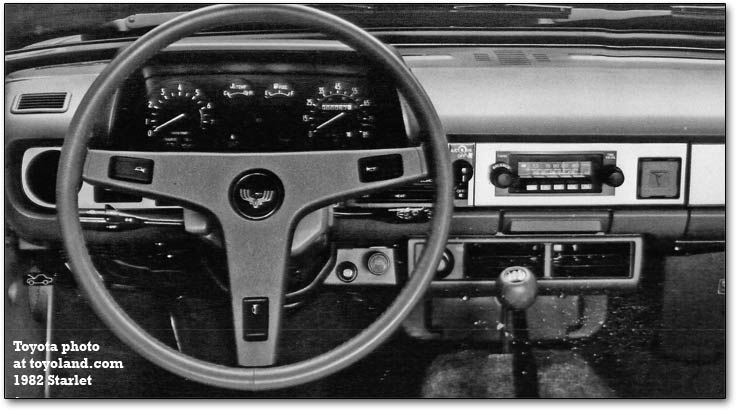 The interior of the Starlet had a high grade of standard equipment not normally associated with an economy car. As of 1983, Cloth seat inserts became standard in 1983, and plush carpeting extended into the luggage/cargo area. An AM/FM/MPX stereo radio or AM/FM with cassette were available. The optional air conditioning system featured a unique dual stage selection that allowed the driver to tailor cooling needs to power requirements and the temperature outside the car. When maximum air conditioning was not required, the driver could select the Economy setting, which operated the air conditioning compressor for a shorter period of time, providing the cooling required but using less engine power -- and gasoline. Even in 1981, the Starlet had reclining bucket seats, front and side defoggers, an optional rear wiper, a three-spoke steering wheel, trip odometer, tachometer, padded dash and sun visors, plush carpets, door armrests, fold-down rear seats, automatic locking rear seat belts, and an aluminum-trimmed gauge panel. Starting in 1982, standard interior features included tinted glass, an electric rear defogger, and a day/night rear-view mirror, then still unusual as a standard item on an inexpensive car; and an optional all-weather package included new rear-seat heating ducts.

In 1983, the American version of the Starlet increased its already high EPA city mileage ratings by more than 10 percent thanks to a restyled aerodynamic front end, fuel injection, and a new 4-speed transmission; its hatch was also lowered for easier cargo loading. The new 4-speed manual transmission was standard and provided improved torque and acceleration in second and third gears. The Starlet earned an EPA estimated city mileage rating of 42 mpg and an estimated highway mileage rating of 54 mpg. 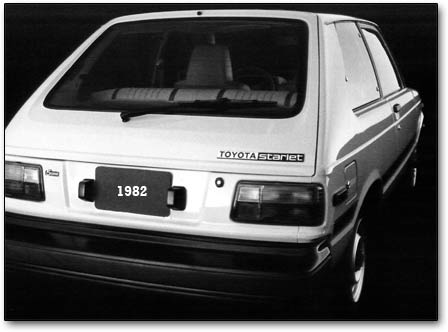 In 1984, the Starlet (now in its 70 series) moved to front wheel drive, following the trend of the time, and allowing for greater interior room with less weight and better snow traction. The line remained two and four door hatchbacks, with the wagon departing; new 12 valve engines were used, the UK got a special 16 valve engine, and Japan got turbocharged engines (Turbo R and Turbo S). Some Starlet models thus moved up to supermini status. (Exports were restricted to the carbed 1.0 and 1.3 engines). A 1987 restyling affected only Japanese models.

The 80 series, brought out in 1990, was, like the Tercel, more rounded, following styling of the time. In Japan, new twin cam engines (including one with a two-mode turbocharger) kept the Starlet sporty, but export models used the 1E and 2E 1.0 and 1.3 liter engines, with the UK again getting its own 4EFE 16-valve engine. Canvas top and convertibles were offered in Japan, with a sports model boasting different interior and exterior trim. In 1992, Japanese models were finally fuel-injected, and minor trim changes were made; for the first time, the canvas top model was sold in Germany and Hong Kong. Another minor appearance upgrade was made in 1994.

The Toyota Sera and Paseo were, according to some, based on the 80 series (which presumably also shared with the Tercel). The Sera used sporty sheet metal and gull-wing doors to differentiate itself; never popular, it did not stay in production long. The Paseo sold in larger numbers but also failed to attract enough of a following, and after an eight-year run it was shut down.

The final series was the Starlet 90, brought out in 1996, again as a hatchback only; the 16 valve engine was now used in Japan and other marekts, and a diesel was offered for the first time. The turbocharger continued, attached to the 16 valve engine. Europeans were restricted to the 1.3 liter engine, without turbocharger. In 1999, the Starlet was discontinued and replaced by the brand new Echo (sold outside the US as the Vitz, Platz, and Yaris), which shared some of its platform with the Prius.