The Toyota Corona was made from 1957 to 2001, its first and last years in Japan only; the four-cylinder versions had various R-series engines. Considered a large car in most markets, the rear wheel drive Corona was generally considered an upscale compact or mid-sized car, depending on the year, within North America; and it was Toyota’s best seller for years. 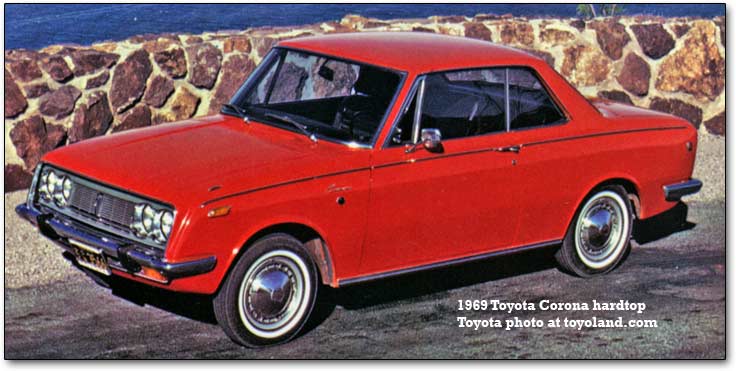 The first Coronas to reach American shores were the T100 series, built as a sedan, hardtop coupe, wood-festooned wagon, and van, powered by a 2.2 liter R-series four-cylinder engine (other markets had 1.6 or 2.0 liter engines); a twin cam engine was sold in Japan only, in the 2000 GT sedan and hardtop coupe. The Standard Catalog of Imported Cars credits the Crown with giving Toyota a serious presence in the United States; the Land Cruiser had sold in very small numbers for years, but when the Corona came in, US sales doubled every year for several years, ending up at 476,807 in 1967 and 659,189 in 1968. 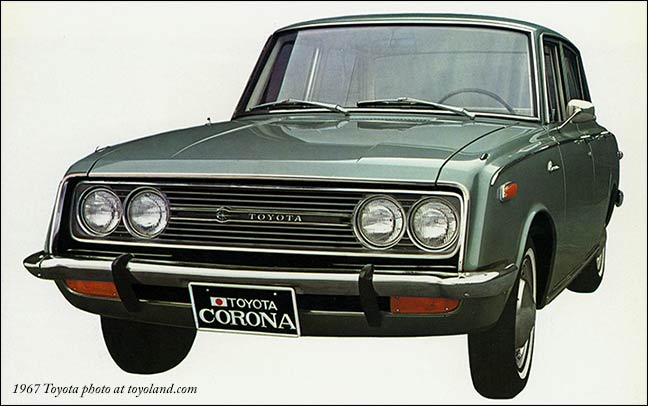 The upscale-looking 1966 Corona, sold in the US through 315 dealers, used a 116 cubic inch engine four-cylinder OHV pushing out 90 horsepower (gross) at 4,600 rpm, with 110 lb-ft at 2,600 rpm; it used a two-barrel carburetor, and a four-speed synchromesh manual transmission or a two-speed automatic. The unibody car weighed 2,260 pounds, a true lightweight by American standards, and sprightly enough with its well balanced engine. Reviewers praised its easy control, road feel, and ability to keep up with traffic even uphill.

Toyota claimed a top speed of 90 mph and gas mileage of 25 mpg, noting that “its big car roominess, luxury car ride, and compact car economy have made it a leading contender for No. 1 rank in foreign imports.” Two styles were available, sedan and hardtop.

The front suspension used a short/long arm design with coil springs and a sway bar; in back, it had five-leaf semi-elliptical leaf springs, unusual for such a light car, with a Hotchkiss live axle. Contemporary road tests praised the handling and ease of shifting the synchronized three-speed. Gas mileage was estimated at around 25-28 mpg; and the price was $1,935, including electric wipers and washers.The Corona, according to Ward's, still weighed just 2,260 pounds, in either sedan or hardtop form—a remarkably light car, which allowed for decent performance with its tiny engine. Buyers had 36.2 inches of headroom (just 34 inches on the hardtop), and 45.2 inches of front legroom.

The total length was 162.4 inches, regardless of body style—far shorter than the 1968 Plymouth Valiant sedan’s 188.4 inches (the Valiant had 38.4 inches of front headroom, and 41.7 inches of leg room at the accelerator—less than the Corona’s, or perhaps measured differently). The engine put out 90 horsepower and 110 pound-feet of torque, less than the smallest Valiant engine, but with hundreds of pounds less weight to carry; with the higher fuel economy, the Corona made do with an 11.9 gallon fuel tank. The overall width was 61.6 inches, compared with 69.6 in the Valiant, so it was a four-seater.

The Corona Mark II was brought out for 1969, with a longer 99-inch wheelbase and a slightly smaller (113 cid) smaller engine that produced more power (108 gross hp @ 5500 and 117 lb-ft of torque@3600) but hooked up to the same choice of four-speed manual and two-speed automatic transmissions. Weight was 2,305 lb for the sedan, 2,315 for the hardtop, and 2,405 for the wagon; the maximum speed was rated at 105 mph. The engine had a five bearing crankshaft for durability. Variants of that engine included a hot twin-cam (139 hp) version.

In 1971, the Corona started at $2,150 and weighed 2,170 pounds - quite a lightweight by American standards, which allowed the four-cylinder to move at speeds comparable to much larger engines in domestic cars. Toyota’s sales continued to climb, passing the one-million mark in 1970. Gas mileage and reliability fell rather quickly starting in 1972, as Toyota (which was not alone in this) tried poorly thought-out patches to meet new clean air standards, and rust, which had always been a problem, remained. Still, the Corona had a decent repair record.

The 1973 Corona came with a 120 cubic inch four-cylinder, with 8.5:1 compression and two-barrel carburetor; it produced 97 horsepower and 106 pound-feet of torque, and could be coupled to either a four-speed manual transmission or a three-speed automatic. The 1973 Mark II sedan and wagon had a standard 156 cubic inch in-line six-cylinder, with the same displacement and a two-barrel carb, capable of 122 horsepower and pound-feet of torque; the transmission options were the same.

The 1974 Corona was redesigned to address concerns over its small size; it had a longer wheelbase and a better ride (despite keeping the rear leaf springs). Despite the increase in size, leg room actually fell by about 1.5 inches. The 120 cubic inch engine was kept, but just for the first year. 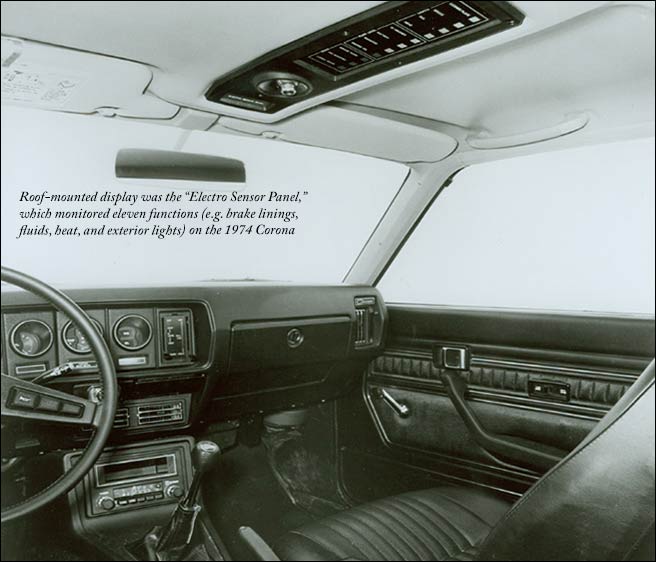 The Corona was advertised as providing big-car comfort, features, and looks in a small (98.4 inch wheelbase!), sprightly package. It was available as a two or four door sedan, two or four door hardtop, and station wagon. 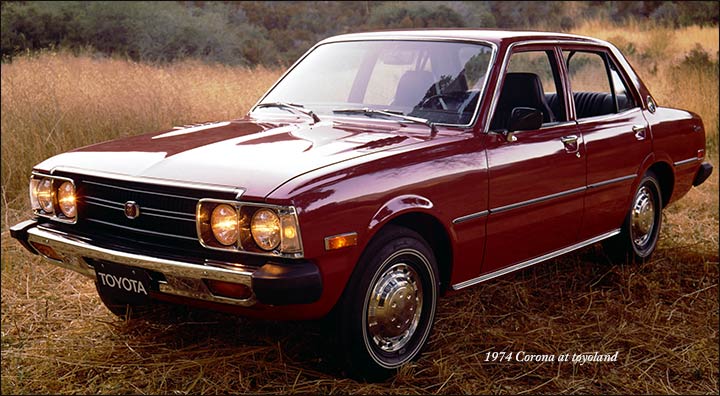 The 1975 Corona got the newest variation on the R series four-cylinder engines, the 20-R also used in the Celica and Half-Ton pickup. The 20-R engine featured electronic ignition, “less tubing and plumbing,” fewer moving parts, and lower emissions. Toyota claimed, with justification, “the silkiest stick in the business.” Unusually, the Corona also used an electric fuel pump for steady pressures. (See our 20R engine page for more.) The gas tank held 14.5 gallons. 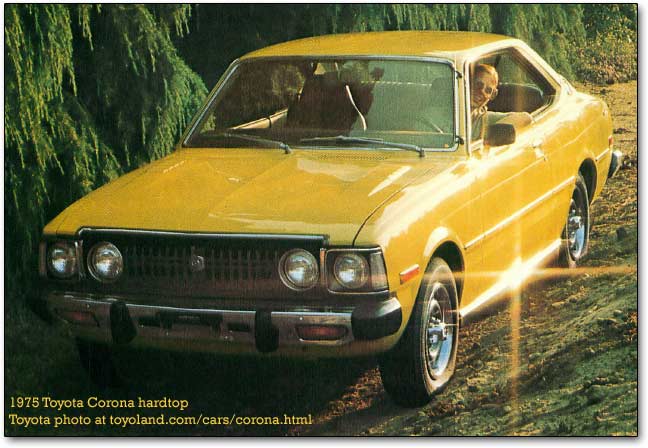 The 20-R was larger than the old engine, at 2.2 liters (134 cubic inch), but having emissions controls baked in helped reliability and gave the gas mileage a hefty gain — though power remained constant.

Switches for the wiper/washer, headlights, and hazard lights were mounted on the column. 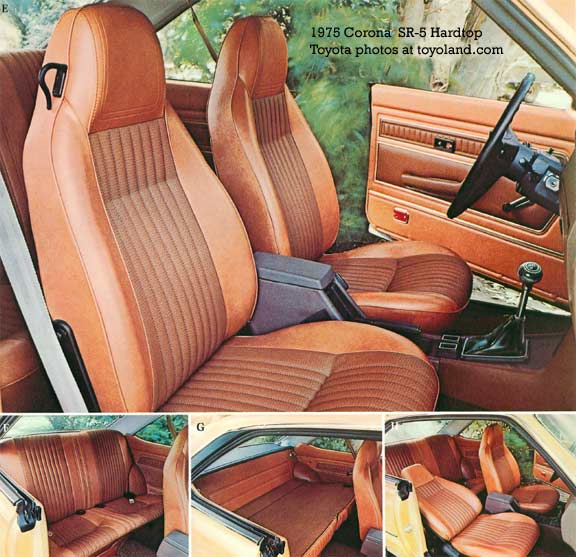 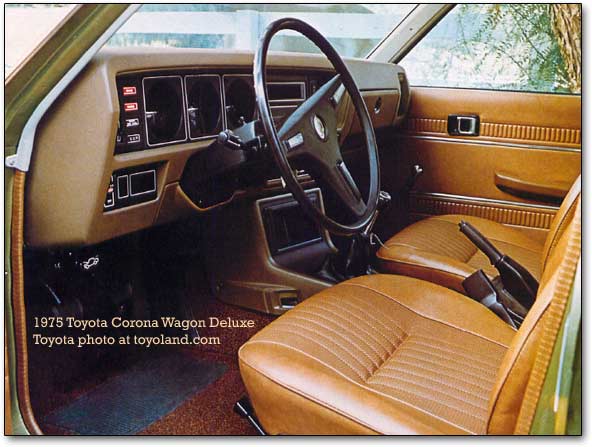 The Hardtop Deluxe gave a family car in a sporty package, with the Electro Sensor Panel, the same engine, and a bandless automatic transmission; it also included wheel covers, radial whitewalls, tinted glass and side body moldings, and flashes of chrome at the grille.

The 1976 Toyota Corona was similar; Toyota could now boast three million worldwide sales of the vehicle since its inception, as well as slightly better gas mileage than in 1975. The Mark II for this year was the largest, roomiest, and most powerful vehicle sold by Toyota in the United States. We have more photos of the 1976 Corona line at the end of the page.

The 1979 Corona (T130) added a liftback and dropped the van, while retaining the same engines (modified from time to time). The car was restyled, repriced, and retuned with a softer suspension, to differentiate it fro the newly enlarged 1980 Corolla.

The 1979 Corona’s standard transmission had five speeds, and the optional automatic had four speeds (with overdrive) — at a time when three speeds was the norm on pretty much every car. 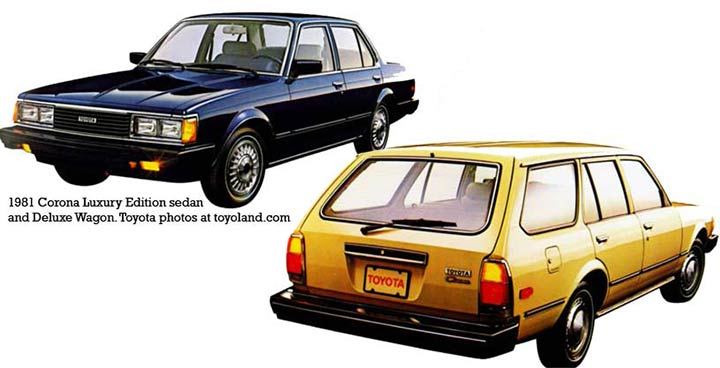 For Americans, 1982 was the Corona’s last year; in 1983, it was replaced by the Camry. Other markets moved on to the T140 and T150 models, which overlapped in time (T140 going from 1981 to 1989, and T150 from 1983 to 1987). A front wheel drive version was developed and named Corona FF or Carina, depending on the country. At different times in different countries, the Corona was replaced by the Camry; in other countries the Carina sold alongside the Corona, including the Carina II and Carina E. The final generation of Coronas was built only for Japan from 1996-2001. 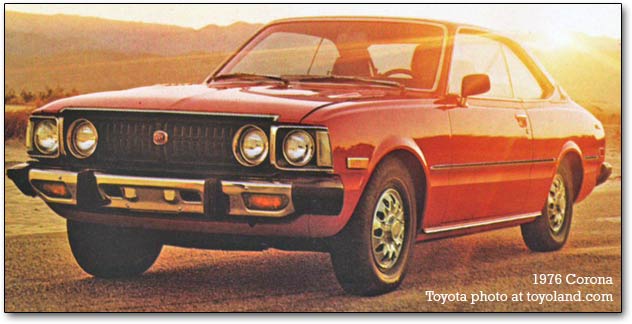