The Mopar (Chrysler) 318 V8 is known for durability. Toyota is known for reliability. What would happen if a 318 was given proper tuning and placed into a light car, like the Toyota Celica? Brandon Robinson is going to find out. The rest of this page is his.

The engine compartment in the 1985 Celica GT-S is large enough to hold a V8. My first attempts to accomplish this were failures, because I was trying to fit a 90° Chevy 350 under the hood. The engine was too wide. 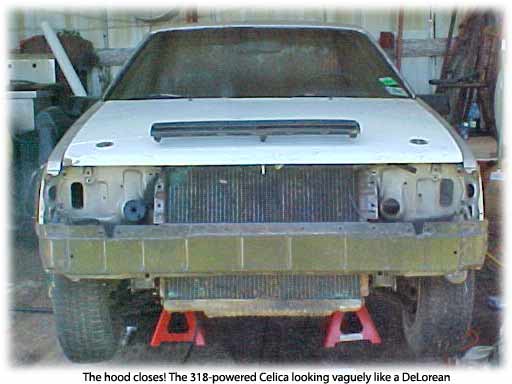 I got my hands on a Chrysler 318, which has a narrower block, and to my amazement, it fits. No need to modify the firewall or steering. The bellhousing and transmission fit like they where destined to mate. You can forget heat and air conditioning, but once the transmission to gets past the steering, it sits comfortably.

Most of the electronic components on the Chrysler motor are Nippon-Denso - that is, Toyota. The distributor is even compatible with the Toyota system. Temperature, oil pressure - all these sensors can be connected directly to my gauges in the dash.

Compartment modifications are required to adapt to the new motor mounts, but the oil filter is easily accessed and the dip sticks are in easy reach. This modification puts truth to a cowl induction hood and hood scoops, the carburetor sticks out of the car. Not to mention that the Mopar 318 is easily modded up to 400+ hp and 400+ torque for less than $1500, making this a Demon class modification for next to nothing. (Not the 840-hp Demon.) 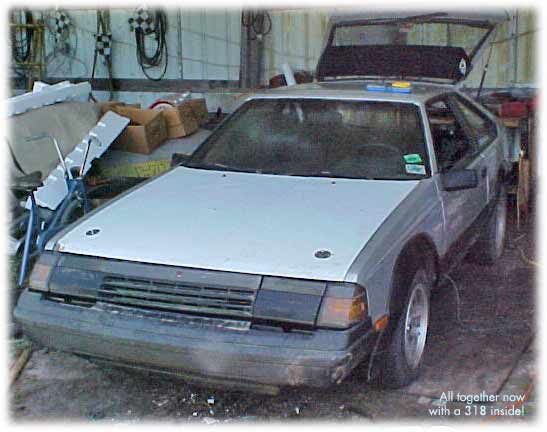 It's not hard to find 318 ignition parts. Chrysler ignitions were generally built with heavy duty use in mind - in short, you won't run out of spark in a stock ignition setup until you really, really mod things. Lots of people raced with the stock computer, coil, and distributor - though some used different advance springs. I took the housing from my old electronic 318 distributor and put the guts from a big block in it. The vaccum advance was advancing it in the wrong direction but it was designed for both applications. I'm using the ignition coil from the Toyota and it cannot handle the RPMs so I have to scrounge up a coil now.

The 1985 Celica GT-S is a rear wheel drive car. Basically they used the design from a MKII Supra from the firewall back. The only difference I have found is the front fenders are shorter and the rear hubs are four bolt. I had used the tranny out of a MKII Supra. And once I get it running, I'm pulling the rear end out of a Supra and upgrading the hubs to a 5 bolt and 16 inch rim. 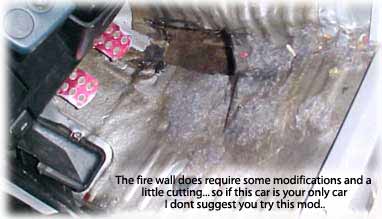 I got some good shots of the transmission mount I fabricated today, and some of the new driveshaft. The only things I have left are motor mounts getting the starter to clear the steering and the radiator. I got the hood on and it only clears the carb by 1/2 an inch.

I thought I was getting close until I tried putting the engine in with the starter on it. To my suprise, the starter hit the steering. I had to find a newer model Nippon Denso starter, move the rack and pinion over, fashion a way to bolt it down, then manufacture some new connecting rods. Finally I can set the motor in the car bolt all the mounts down and hook up the drive train. I am to the point now that I can sit down in the car turn the key and the engine runs. 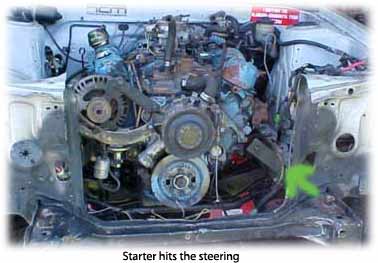 "If it doesn't fit, get a bigger hammer" is the truth. I had to beat the frame in a little to get the radiator to fit.

All I have left is the aftermarket. I was thinking of a MSD Ignition Coil, Mallory distributor, Edelbrock intake manifold, and a Holley 650 Double pumper. And a 16 inch electric fan. 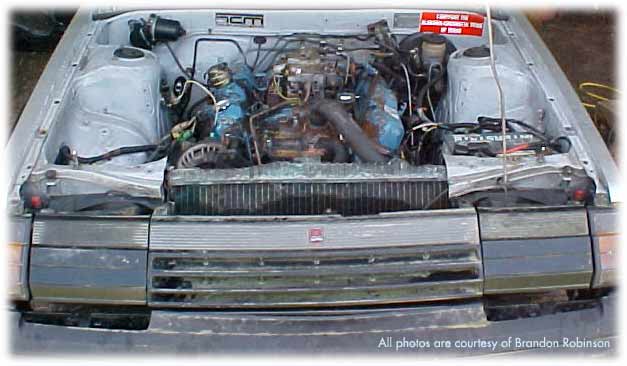 This motor will produce as much power as the money as I want to spend. My plan is Sealed Power Pistons, Comp XE Cam $130, 5.9 Liter Cylinder Heads Ported $200 (the engine is a 5.2 liter), Edelbrock Dual plane intake, one inch open throttle body space and a holley 650 double pumper with a proform body. This combination will produce 406 bhp and 408 ft/lbs without a bottle or turbo. 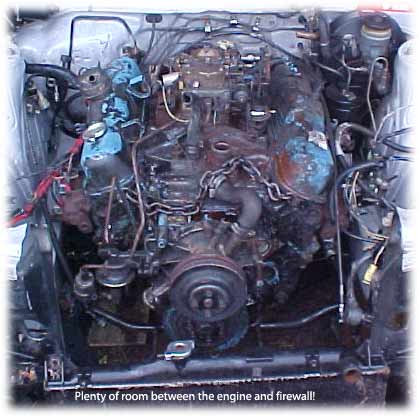 While a Toyota 7M-GTE (Supra) engine is still building boost in the turbo, all my power will be there. If I want to go higher I can get a set of H beam connecting rods and a high rise dual 4 barrel carb intake and some Nitro-methane fuel (VP Racing Fuels) and I will produce close to 700 bhp and an equal amount of tourqe. Add a Weiland two stage supercharger, 50psi boost and I can easily get it up in the thousands still without waiting on a turbocharger to build boost. 7M-GTE has no power compared to that.

There are so many aftermarket mods that it can be affordable. Not to mention the mods manufactured by Mopar (Chrysler) for the Cuda, Dart, Demons, and Chargers. A six pak would be nice - three two-barrel carburetors tuned in sync will light the tires up.

The car is almost running: I have the Edelbrock intake, carburetor, 1 inch open spacer, chrome valve covers, Hurst shifter, and dual electric fans off a Buick. 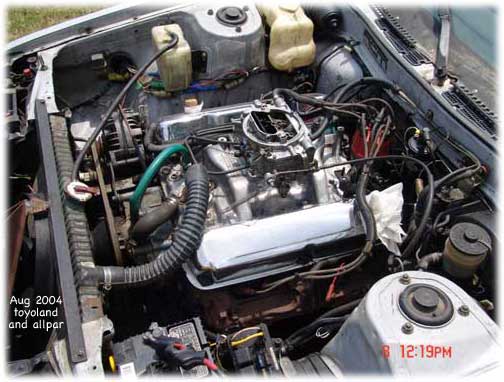 Ramon Hunter took on a similar job — the 318 V8 in a 1985 Toyota pickup. You can see it here, and hopefully soon you can read it here too! 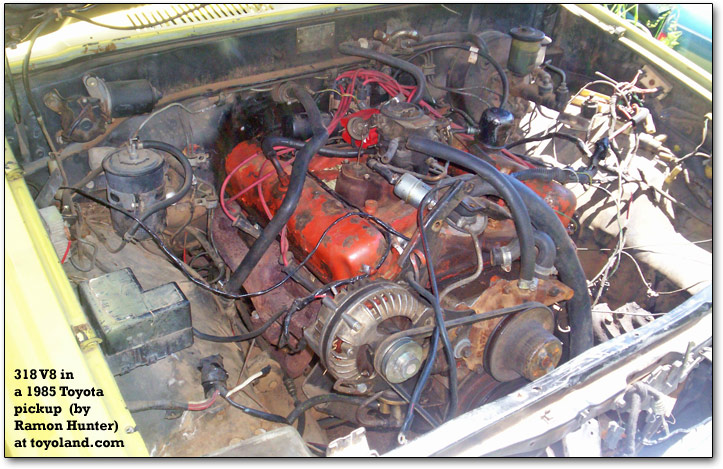 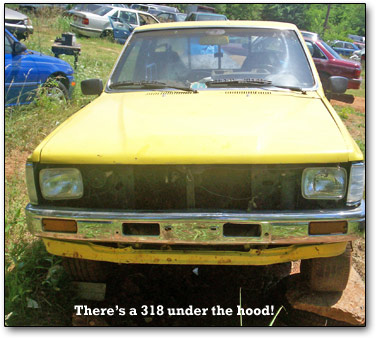