At its unveiling, the third generation Toyota Avalon had four trim levels: XL, Touring, XLS, and Limited. Designed mainly for the United States by Toyota’s facility in California, and assembled at Toyota’s Kentucky plant, these Avalons all have front grilles with horizontal chrome bars, large tail lamps, distinctive trunks, and dual exhaust outlets.

The car was larger and more luxury-tuned than the Camry, but was based on the same platform and architecture; the Avalon used the Camry’s V6 engine option, with similar front and rear suspension systems (MacPherson struts up front, bi-link in back). The interior was heavily redesigned from the Camry, for a much more luxurious look and feel.

Front wheel drive helped the Avalon to have a flat rear floor; rear seats reclined up to 10°. The driver had a tilt and telescopic steering column and a sliding center console armrest. The large trunk provided room for a full-size spare.

There was no four-cylinder; every Avalon had the 3.5 liter, 24 valve V6 engine with 268 horsepower and 248 lb.-ft. of torque. The “intelligent” variable valve timing (VVT-i) system increased high speed torque and fuel economy by optimizing both intake and exhaust valve timing, bringing a 6.6 second 0-to-60 mph acceleration time — with 21 mpg city /31 mpg highway fuel economy ratings, and certification as an Ultra Low Emission Vehicle.

The Touring, XLS, and Limited have specially designed Michelin Energy MXV4 P215/55 R17 tires on 17-inch aluminum alloy wheels. The sport-oriented Touring’s wheels are graphite-finished; it has both a firmer suspension and higher coil spring rates.

Kitting out the models 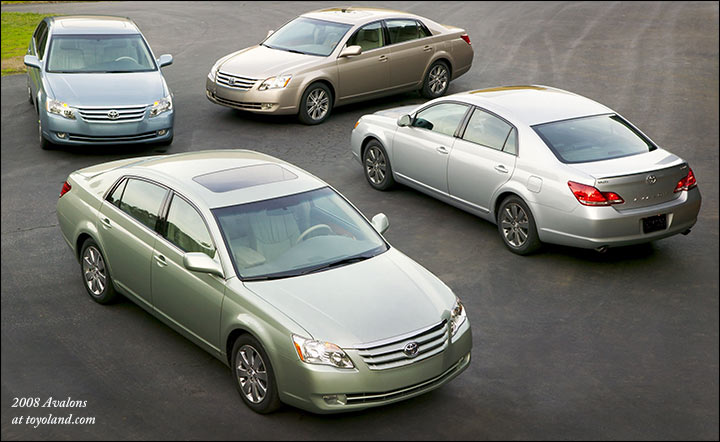 The XLS added a power moonroof and in-dash CD changer, heated/auto-dimming outside mirrors, a compass, and an anti-theft system. 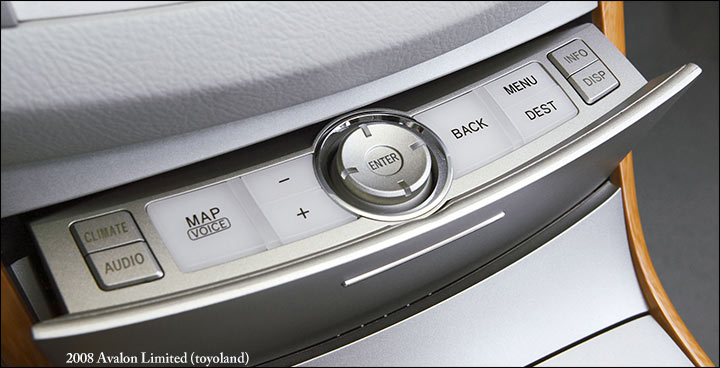 All Avalons but the XL had an optional navigation system, with a seven-inch display.