The Toyota 2000 GT was an odd mix of excellence and not-quite-right, with reviewers praising the ride and handling, while complaining about the slow, difficult shifter, noise, and flat spots on the throttle curve.

The Yamaha engine had a cast iron block and aluminum-alloy head, with seven main bearings and an equal bore and stroke — 2.95 inches (75 mm), for a modest 121 cubic inch / 1.99 liter displacement, smaller than the smallest Chrysler six and, for that matter, the smallest 1980s Chrysler four-cylinder. It still pumped out a gross 150 horsepower at 7,000 rpm (likely around 110 net horsepower), and 130 pound-feet of torque at 5,000 rpm, with a 7,000 rpm redline. The maximum speed was 125 mph. Compression was 8.4:1; the engine was fed by triple Solex side-draft carburetors.

It was a small, light car, weighing around 2,55 pounds, with a near perfect 50.5/49.5 weight distribution. The dimensions appear to be impossible (92 inch wheelbase and total length of 164 inches), or perhaps there’s more overhang than appearances suggest. The axle ratio was 4.11:1, with an optional 4.62:1 ratio available.

The car had a short/long arm front and rear suspension, with coil springs and sway bars in both front and back. Rack and pinion steering wrapped up the package. Despite being quite low to the ground, with a 46-inch height, the car had over six inches of ground clearance; the toll was taken on the driver and passenger. Tires were supplied by Dunlop (SP41). 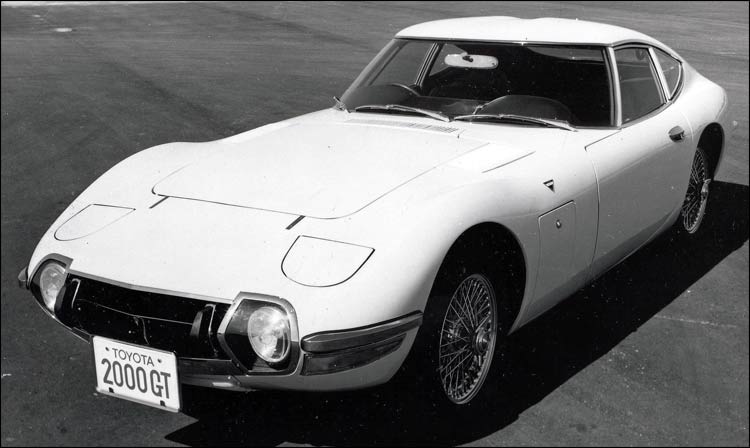 Like the biggest muscle cars of the day, the 2000 GT had 15-inch wheels; and 0-60 was done by Car and Driver in a respectable 8.2 seconds, equalling quite a few big V8s, though the official time was a more realistic (and far less impressive) 10.1 seconds. The quarter mile passed in 15.9 seconds, accoring to Toyota, or 16.3 seconds, according to Car and Driver. Fuel economy was around 20 mpg, on premium. The top speed was claimed to be 137 mph—youc an decide whether that was true.

Car and Driver praised the ride comfort, handling, agility, seats, build quality, dashboard, and rolling resistance, while slamming the brake dive, driving position, and interior space; they had an 80-0 stop in 255 feet, with one wheel locking up before the others. Car Life praised the craftsmanship, but noted that drivers had to have very small feet, and preferably small bodies.

You can see a convertible 2000 GT in action, in the James Bond movie You Only Live Twice, filmed in Japan; and the coupe set numerous speed and endurance records in October 1966, when it averaged 128.8 mph over three days. There were also 200-horsepower racing versions with higher compression and a more aggressive cam.