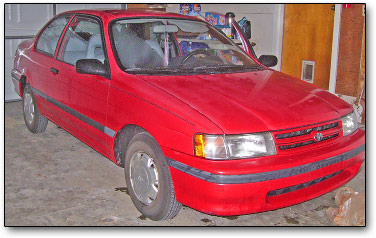 While the heater is slow to operate and takes a long time to heat up to even lukewarm, this may be an issue of age. The air conditioner on the other hand, is cold even on the hottest Midwestern days. The air seems to blow harder than the heat does and we almost never have to use the extra “max air” button when running it.

We have had to replace the tires, an axle, the interior light and one headlight in our 15,000 mile test drive. The engine was clean as a whistle, with no leaks.

The car handles quite well for its age and is surprisingly comfortable. The Tercel maneuvers quite well both in town and on the highway. Turns are sharp, it’s quick to speed and the gearshift and clutch are friendly and easy to shift smoothly. However, the Tercel is susceptible to crosswinds, forcing the driver to concentrate on keeping it on the road on windy days.

This car is not made for the speed-demons of the world. It gets great acceleration from idle; however, sustained speeds cause the little Tercel to shake just slightly. Anything over 70 miles per hour is a bit scary. Maybe it’s the vibrating shimmy in the car, maybe it’s the high-pitched go-kart sounding motor – whatever it is, it’s great on the highway as long as you’re doing around 65 mph, but don’t try to go too much faster than that. [Toyoland’s experience has been that the Tercel accelerates well up to highway speed, but has a maximum speed of a bit over 80 mph.]

The front of the cabin is roomy and comfortable with cup holders, and three different storage compartments. The amount of space the driver has is more than adequate for anyone whose height ranges to about 6 feet tall. The original seats and carpeting look and feel like new. The trunk is large for such a small car, and the back seats fold down to accommodate more and bulkier items without having to leave the hatch open. It holds four adults, although the people seated in the back should not be claustrophobic… or tall. The larger base-stationed child carseats of today fit nicely in the back seat. The base sits safe and snug and is fairly easy to get to, once you put the front seat out of the way.

Knobs and controls are easy to reach and centralized with the stereo, cup holders and storage compartment. The climate control is the kind you slide to one side or another, depending upon what vents you want opened.

The engine has always started, even in the coldest of weather – unlike my husband’s Mustang. It’s dependable and maneuverable on the ice and snow, provided one drives for the weather. The brakes have been excellent and the steering is very easy and straight. Even though small, the Tercel is tough and well-built. The gas tank is small with 11 gallons of capacity, but real gas mileage has been roughly 30 mpg, providing the same cruising range of cars with thirstier appetites and larger tanks.

This compact little car has been a great value. If you get a good used Tercel that’s been well-cared for, and is affordable for your budget, it is well worth your time.