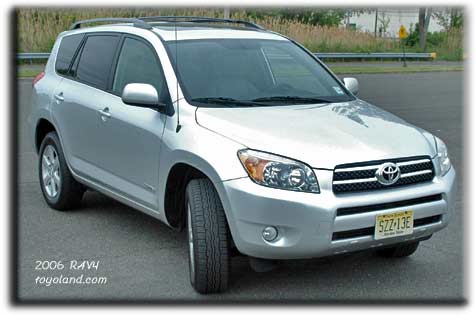 The Toyota RAV4 is an interesting vehicle, newly expanded to the size of pricier SUVs, but keeping much of its original, cute-ute feel. The four-cylinder model is much nicer in the showroom and on paper than on the road, where it still has better manners than such best-sellers as the Ford Explorer, while the V6 puts a powerful engine under the hood of a light SUV to bring surprisingly quick acceleration.

Around town without a full load, the RAV4 is nimble and quick around corners; the stability control is rarely needed, but comes into play if you really push the limits (which isn't easy to do, since the natural cornering is so good). With a heavy load in the cargo bay, the RAV4 starts to feel twitchy and unstable, but doesn’t seem to lose traction or control. The prior generation was more easily thrown off kilter by weight in the back.

Straight-line acceleration is usually good but the transmission tends to have a long pause before roughly downshifting. If you stay light on the pedal, shifting is silky smooth, but for any sort of rapid acceleration, shifts can be delayed, premature, and often rough, while the engine itself is moderately noisy, tending to buzziness.

The ride starts out feeling remarkably well cushioned, but that quickly translates into bounciness on rough roads, unless the rear is nicely weighted down — in which case the ride becomes firm but nicely cushioned, but handling starts to suffer. 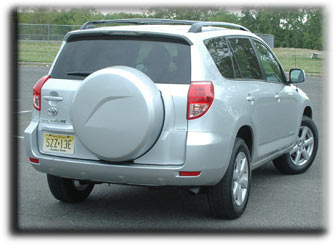 With more weight to carry, the 2.4 liter four-cylinder engine is less responsive at lower rpms, and gets noisy as it climbs the revolutions; but the four-speed automatic, which seems to be geared almost entirely for saving fuel, is slow to downshift, and sometimes, even with the pedal mashed all the way down to the floor, will shift prematurely at below 4,000 rpm! It has a sort of rubbery feel under hard acceleration, with power gaps when going from zero to sixty. At highway speeds the engine fine until you need a downshift. The engine noise is partly drowned out by the wind noise; neither are excessive, but both are clearly present. The engine is dead quiet and smooth at idle with the air conditioning off, but it makes a low-pitched, resonating grumble with the air on, and shakes a bit as well.

The four cylinder engine puts out a full 160 horsepower and 165 lb-ft of torque. The same engine is used to good effect in the Scion tC, where a manual transmission brings out its full flavor. The newly expanded RAV4, though, is now the size of a Jeep Grand Cherokee or Ford Explorer (at least, inside), and that strains the little engine. A much better choice might be the V6, which probably doesn’t have much of a gas mileage penalty in real life, and does 0-60 in an amazing near-7-seconds. 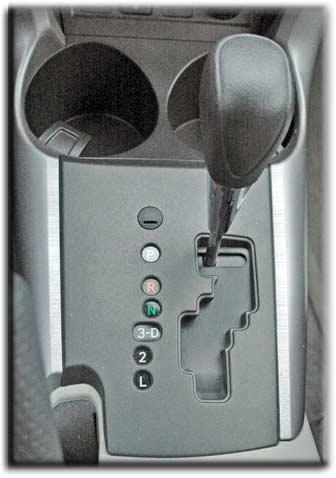 The gated shifter allows selection of any gear; it goes right to Drive with a light detent to stop accidental selection of third gear, and has first and second positions on the shifter. All wheel drive is automatic, or engaged with the push of a button if desired. 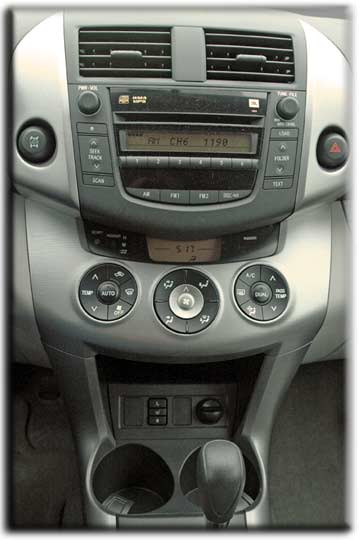 The previous generation RAV4 had a nicely executed, simple but stylish dashboard, with a conventional, easy to use climate control area. That's all gone away now, in favor of an unnecessarily trendy and awkward system which makes the driver hunt for the right control. One nice feature is a button which automatically recirculates the air, with the fan on high, for a couple of minutes, long enough to get all the air through the pollen filter; and the dual-zone temperature control is a nice feature, as well. However, the system always started on recirculate, and often set the fan higher than we had left it (it’s fairly noisy on anything but the lowest setting); the fan control is fairly small; and there isn't much underlying logic under placement of the various buttons. Air conditioning seemed powerful enough.

The stereo is quite good when the car is stationary, but the sound loses a lot of its quality when you reach highway speeds, unless you crank the volume up; and it's impossible to lower the bass sufficiently for talk radio. The built-in stereo looks nearly impossible to replace with an aftermarket unit. Controls are easy to use, and the stereo very conveniently remembers audio settings for each mode and station, which can be a real advantage. Underneath the stereo is a combination clock and climate control display, showing the vent mode and temperature (for each front-seat passenger if the dual climate control is engaged).

The cruise control is the standard Toyota kind that must be turned on each time you drive, but after that is easy to manipulate, with a defeat function and up-means-faster, down-means-slower controls. Wiper/washers and headlights are equally convenient, intuitive, and conventional. Indeed, we were almost disappointed by the lack of control quirks. The RAV4 also has radio controls on the left side of the steering wheel - up/down, volume, and a mode button.

The instrument panel is more affected that the last one; it drops the black-on-white lettering in favor of white on black, and has a large round speedometer superimposed on a tachomter and gas/temp gauge. It works, but looks just a bit plasticky. At night, a rather nice fade effect is achieved by the use of backlit concentric circles. The instrument panel is always clear and easy to read.

One area where SUVs have traditionally fallen behind minivans is the cupholder, an invention that quickly became indispensable to coffee lovers and parents. The RAV4 cupholders are clever, with a rounded retainer that pulls into place to hold cups snugly. It's a simple design that looks as though it'll last the life of the car, but may not be as effective as the prior generation, which used multiple retainers. In back, cupholders are molded into the doors and into a center armrest that can be folded down from between the seats.

The rear seats in this type of vehicle generally fold and tumble out of the way to make room for cargo, but the RAV4 takes a page from early minivans and has removeable rear seats as well. That makes the cargo carrying capability more impressive; normally the cargo area is not very large, though it is shaped quite well and can hold a surprising amount of stuff, thanks to the convenient dimensions. Getting the stuff in is fairly easy if you're not pulled up to the curb, since the rear door swings open all the way; but it's hinged incorrectly for the United States, so if you are at the curb, you'll have to go into the street (or hope there's a lot of space behind the vehicle) to load it up. On the plus side, the cargo bay has a very low loading floor (just like the seats, which are at just the right height), and the board protecting the underfloor cargo area can withstand surprisingly heavy weights. 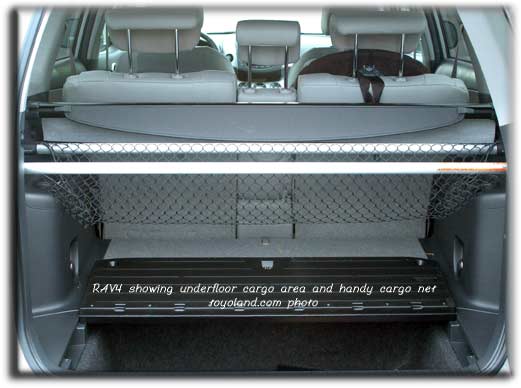 Smaller items can be placed in map pockets in the front doors, a small opening in the center console and another (the size of an EZ-Pass) in the dash, a two-level covered central bin, and a terribly clever "extra glove compartment" on top of the normal one opens and closes with a firm press of the same button. In the cargo bay, storage compartments are built into the walls, and underneath the floor; and rear seat passengers both have cargo nets built into the back of the front seats, good for books and magazines. The cargo bay also has a removeable cargo net that can, with difficulty, be stowed underneath the cargo bay floor (along with the privacy shield). Both cargo net and privacy shield work like shower curtain rods, with springs hidden in the ends so they can be shortened and slipped out of their generous mounting holes. Getting the net in and out is easier than with most other vehicles, since it doesn't have clips set in a mysterious pattern.

As for people, the rear (second row) seats have very good headroom and good legroom.

Visibility is good all around, with just one major blind spot in the usual rear quarter, despite having the spare tire sitting outside the gate (where it's low enough not to interfere). As with any vehicle of this type, though, you do have to be careful backing up - you can't see children (or midgets for that matter) behind you. 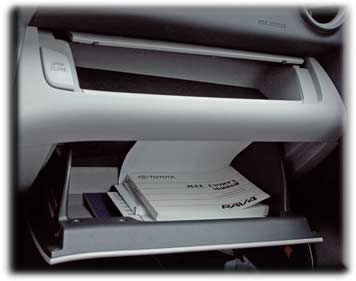 Gas mileage was rated by the EPA at 23 city, 28 highway. By comparison, the base Ford Escape automatic with front wheel drive gets 22 city, 26 highway, and four wheel drive cuts that to 21/24. The Ford Explorer with its base engine gets a mere 15 city, 20 highway, and costs considerably more - despite having faster depreciation and fewer conveniences. There's a reason the RAV4 made, and continues to make, such an impact on the market, though the reason for the Ford Explorer's long success has eluded us.

Our test car was a bit more expensive; side airbags (both seat-mount and curtain type to protect all four passengers) added $650. Other options were a bit on the heavy side: leather at $1,050 (the fabric seats are quite nice), seat heaters at $440, moonroof at $900, carpeted floor mats at $120, a CD changer with 9 speakers and subwoofer at $340, and an option we'd pay not to have, daytime running lights at $40.

Overall, the RAV4 is a fun little SUV that really is quite enjoyable and reasonably priced. We don't think we'd try to tackle the Rubicon with it, but off-roading isn't the point (that's for the 4Runner); the all wheel drive is more for dealing with bad weather, snow, and rain, and perhaps going on dirt now and then. The RAV4 is practical enough to be justifiable, while economy is good for an SUV if not exactly commendable by car standards. The overall package is quite nice for SUV buyers, and we do recommend it, though we wish the transmission was not quite so well-tuned for gas mileage and so poorly tuned for the driving experience. An "economy - normal" switch would be nice to have.