The new Scion xD, while typically competent and well screwed together as anything else associated with the big T, doesn’t inspire but is steadfast and practical. There are, though, a plethora of web sites designed to explain how to make a Scion into a ride most “sick.” A bit of the old tuner magic might be what the new Scion xD needs to show its true colors.

The exterior design of the xD is cute in a way similar to what a pug dog is. Its elevated hood line – resultant perhaps because of literally heightened European pedestrian safety standards – is very similar to the snout of that heavily breathing little dog.

The xD replaced the xA, leap-frogging the alphabet over the newly redesigned xB and the carryover xC. The reason, one surmises, is the Toyota wants us to know the replacement is just that, a new car from the ground up.

The xD shares a drive train with the Toyota Yaris hatchback. There’s just one four-cylinder engine for the Scion and it is a 1.8-liter, in-line four-cylinder engine producing 128 horsepower; however, there is a choice of transmissions: a five-speed manual or a four-speed manual. Unless you’re one of the increasing numbers of people who have absolutely no knowledge of how to work a clutch, go with the manual transmission. 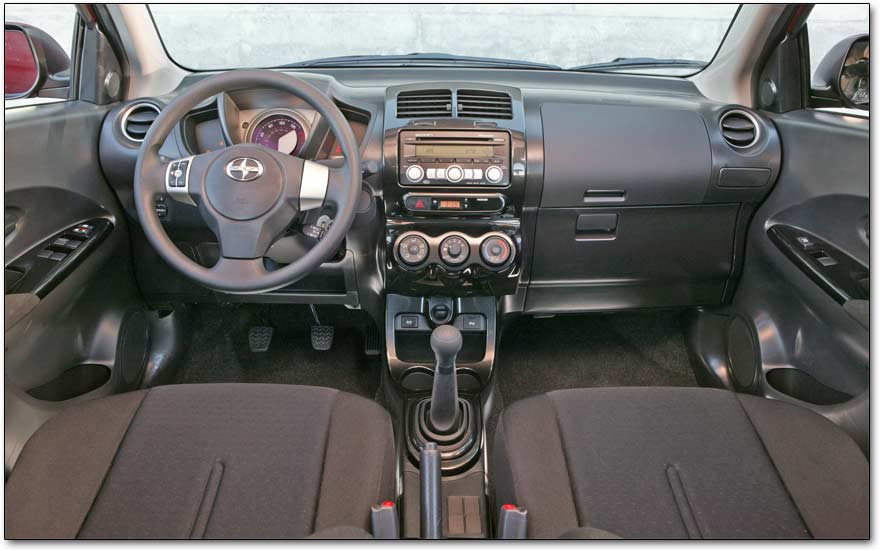 After taking the Scion xD on a 300 mile day trip from Seattle, Washington down to Portland, Oregon and back – with a one day collector car auction in between driving modes – we can tell you that the manual best gets the little four cylinder engine to put itself into the sweet spot wherein which resides peak torque (125 pounds/feet at 4,400 rpm). It is also the transmission that will yield the best fuel economy: 33 mile-per-gallon on the open road.

Sitting inside the 2008 Scion xD you’d never know you were in a car with such compact exterior dimensions.  The dashboard and controls seem to connote a mid-sized car; and in terms of interior dimensions, it is. When you fold down the rear seats, the xD has 36 cubic feet of storage – four more cubic feet than the xA it replaced.

The tested xD had a mid-level Pioneer sound system whose controls hearkened back to the muscle car days with its multifunction control knob. While it might not meet the needs of the most hardened listener of hip-hop, its 160 watts, six speakers and iPod connector should prove adequate for anyone looking for basic transportation.

You can upgrade, through a dealer, to an optional Premium audio system – additional cost of $689 – that adds one more feature to the standard unit, the ability to download images, four-second video clips and 8-second movies from Pioneer’s web site. Additionally, Pioneer software allows anyone who opts for this upgrade to burn images of their choosing and movies onto a CD; and then, upload them onto an available head unit. To underscore the trick nature of it all, the faceplate light will change from deep orange to blue, at the touch of a button.

But hey, since many Scion owners fall into the demographic category that sees automobiles as moveable club scenes, the xD’s optional Premium audio set-up also has head units in the rear, allowing for additional speakers and sub-woofers. All head unit features remain unchanged if this feature is activated.

Getting you on down the road is a suspension set up that consists of a L-arm type MacPherson struts in the front, and a torsion beam suspension in the rear. Combined with the short, wide stance of the xD – 154.7 inches long and 67.9 inches wide – you’d expect pretty neutral handling; however, upon hard cornering, the front end evidenced some understeer, the nose plowing into the sweeping turns that can be found on the highway 40 miles north of the Washington-Oregon border.

The rack-and-pinion steering had good on-center feel, although the feedback from the road was a bit imprecise probably due to the electronic power steering. It might be better if Toyota saved the power steering boosting to cars such as the Avalon or Camry.

The tested Scion came with the option of vehicle stability control – at the additional cost of $650 – with traction control.  Since the xD seems like a fairly stable little door-stop of a car, whose engine’s torque characteristics wouldn’t likely induce a lot of wheel spin, crossing that item off the list would be a good way to save money – if so inclined.

The braking is a combination of front ventilated discs up front and drums brakes in the rear – perhaps Toyota’s own way of keeping costs down. The Monroney sticker for the Scion xD we drove showed a manufacturer’s suggested retail price of just $14,550; however, it was equipped with Vehicle Stability Control – adding $695 – and also $155 worth of cargo floor mats and a Scion security system – at $469 – bringing the total up to $16,444. That’s pretty inexpensive these days and allows plenty of money left over for an aftermarket turbocharger set-up. In which case, maybe you’d want that Vehicle Stability Control, after all.