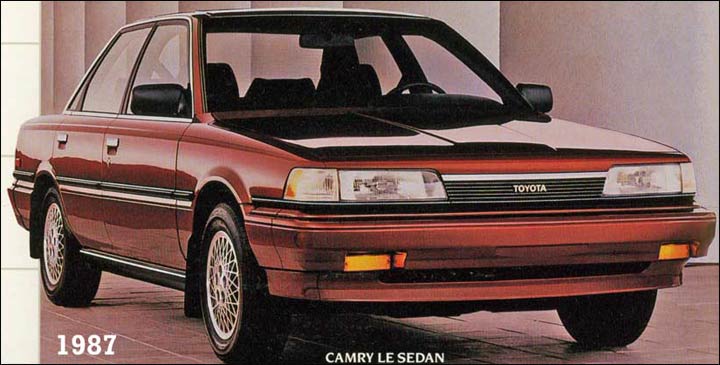 The Toyota Celica Camry, launched in January 1980 for Japan only, was a Toyota Carina with updated styling and a front-end that resembled a 1978 Toyota Celica XX (Celica Supra). It had rear wheel drive, with an 88-hp 1.6 or 95-hp 1.8 liter engine; later, it gained a 2-liter four-cylinder from the Celica.

The 1983 Toyota Camry, on the other hand, was a completely new car, with four doors and front wheel drive, in sedan and hatchback form. It replaced the rear-wheel-drive Corona, a small, rust-prone but likeable car whose name was related to the word crown (following the Toyota Crown); the Japanese word for crown is pronounced like “camry.”

The Camry’s 102 inch wheelbase was large for Japan, but just right for the United States. It came with a standard five-speed manual transmission and an automatic option, with all wheel drive showing up on the ’88s.

The four cylinder engine produced 92 horsepower; it had far more torque than the Accord’s engine, and was eager to run, with a high-tech, high-pitched sound when revved high. In a light body and with a five-speed stick, the Camry could outrace many cars with bigger engines and more weight. A 73-79 hp turbodiesel (with high torque and an extra 3 mpg or so) was optional in the US from 1984 to 1986, but it’s quite rare

The car was generally reliable, though many people had problems with the oil pump gaskets on early models, as well as the electronic ignition computer and the automatic transmission (an advanced design offering four speeds).

The Camry’s comfort, sound insulation, gas mileage, and reliability soon made it a big seller. Work soon began on an American factory in Georgetown, Kentucky, which would be Toyota’s second American plant and their first non-union plant. The 1985 Camry added two horsepower and flush mounted headlights. 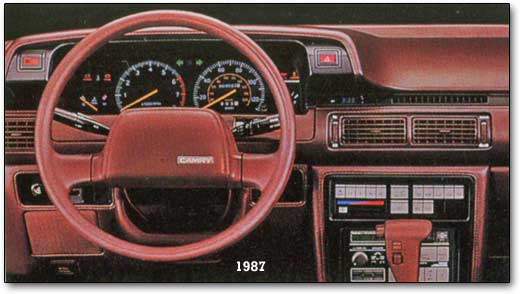 The 1987 Camry brought an engine with four valves per cylinder and dual overhead cams, rated at 115 horsepower — beating the Accord by 17 hp. Noise and vibration were cut even further; the automatic was refined, the sheet metal cleaned, and the hatchback was replaced by a wagon. The Camry had a four wheel independent suspension, variable assist rack and pinion steering, and tilt wheel with memory. Production started at the Kentucky plant during this generation.

A small V6 came one year later; a small 2.5 liter design, it too had dual overhead cams and four valves per cylinder, cranking out 153 horsepower (more than Mitsubishi’s 3.0 liter V6), which later grew to 160 hp. Manual cars also gained optional all wheel drive (“All-Trac”), which spread to the automatic in the ’89s. Some of the 1991s had optional antilock brakes; a knock sensor was added to the V6.

The trunk now held a full 14.6 cubic feet of gear, and the rear seat was split so four people could still fit when one seatback was folded down; that provided 65 cubic feet of space.

There were three trim levels of the 1988 Camry: the unbadged base model, the DX, and the LE. The 2.5 L engine and Camry chassis was repackaged as the upscale Lexus ES 250. The ES 250 was essentially the Japanese-market Camry hardtop.

The 1992 Camry grew again, to meet American tastes; the wheelbase rose by just one inch, the width by two, and the length by six inches. Sound insulation was again increased, and a heavily modified version became the Lexus ES 300. Antilock brakes became optional across the board. (The 1992 Camry was first sold in Japan in 1990).

To carry the extra weight, the four-cylinder grew to 2.2 liters (130 hp), and the V6 to 3 liters (185 hp), bringing down 0-60 times to less than eight seconds with the V6 and manual gearbox. This generation also added fuzzy logic to the automatic, and started Toyota’s trim levels of DX for Deluxe, LX for luxury, XLE for extra luxury, and SE for sport. In the United States, an automatic transmission became the only option on all but the base and sport-model Camrys. 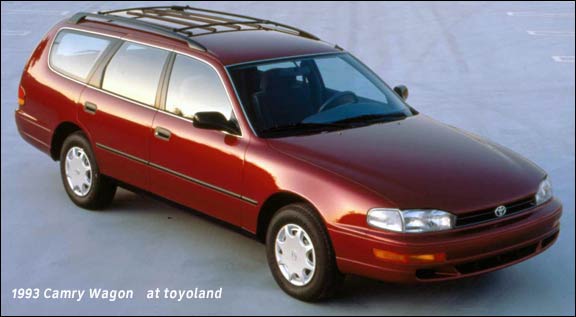 The American plant was by now going full steam, building three quarters of all Camrys sold across the world. The Camry was never especially popular outside the US, though, due to its size and expense.

In 1994, a two-door Camry was brought out, a passenger side airbag added, the V6 redesigned for a three-horsepower boost, and the automatic given new controls to reduce gear-hunting. Just one year later, the Camry received a sheet metal refresh. 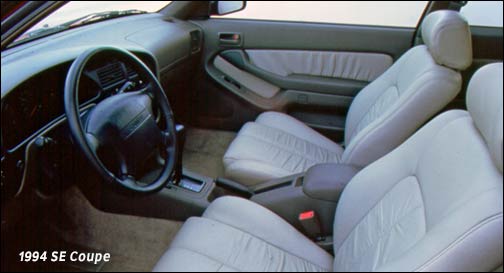 The fourth-generation, 1997 Camry was launched in Japan in December 1996. It continued as a sedan and station wagon (called the Camry Gracia in Japan), though the latter was not sold in the United States. The 1997s had a two-inch wheelbase gain; while the SE was temporarily dropped, horsepower increased to 133 on the four, and 194 on the six. The base CE V6 with manual could still do 0-60 in under 8 seconds. Traction control was optional on some models, antilock brakes standard on all but the least expensive model.

The 1998s had side impact airbags as an option on all models, an engine immobilizer (since the Camry had become one of the most stolen vehicles), and low-emission status for both engines. The LE was dropped and a base CE slotted in.

An extended-wheelbase version, the Avalon, was brought out and became quite successful, (despite its Chevy Celebrity-style interior), due to its comfortable, soft ride and surprising straight-line acceleration. The second-generation Avalon improved cornering quite a bit while bringing the interior upscale.

A new coupe, the Solara, arrived in 1999, with a sportier feel, available sport package, and different sheet metal; it would last through 2009. Daytime running lights arrived as well.

The fifth generation had a shorter front end, for more cabin length; it was taller than the squat four-generation by 2.5 inches, and had a two inch longer wheelbase.

In the United States for 2002, the basic CE model was dropped but the SE sport model was reintroduced. Both the LE and SE models are available with a manual transmission when equipped with the four-cylinder engine now up to 2.4 L and 163 hp. Any model could be equipped with a V6 or an automatic transmission, although the manual transmission was not available on V6 models. The 2002 Camry Solara remained on the fourth generation chassis, and received only minor styling upgrades to the front and rear ends. However the Solara did receive the same 2.4 L I4 engine now available on the Camry.

The interior was modernized quite a bit, with less of the “center stack” feel and a more intentional appearance (see our review).

In 2005 Camry had upgrades such as a chrome grille (except on SE), a new taillight design, and new wheels. Upgrades included a rear center head restraint, storage bin in the door, Optitron gauges, and standard leather on XLE V6. The second generation Camry Solara had radically different styling from the four-door Camry, instead taking design cues from the Lexus SC 430. The four cylinder was unchanged, but a new 3.3 V6 was optional, coupled to a 5-speed automatic transmission; and a new SE Sport debuted.

The sixth generation, a complete redesign, was built in Kentucky and Indiana, starting with the 2007 Camry; its 2.4 four was good for 158 hp and the optional 3.5 L V6 was rated at 268 hp. The V6 had an optional six-speed sequential transmission. A navigation system with a cell phone link and heated leather seats were available for the SE and the XLE V6; a keyless entry/remote starter was optional on the XLE V6. The rear had controversial "Bangle-butt" styling, first seen on the 2002 BMW 7 Series.

The 7th generation Camry was introduced on August 23, 2011; it had three engine choices...

Trim levels were L, LE, XLE, SE, XLE V6, SE V6, and Hybrid. The manual transmission was gone; a six-speed was used with gasoline cars, a CVT with the hybrid. This seventh generation Camry weighed less and had better gas mileage even with the non-hybrid engines.

So far, not unexpectedly, there are few common repairs for the Camry.

Under stop and go driving or heavy acceleration, the foul smell of sulfur may appear on some 2002-2004 models with the 2.4 liter engine. If that happens, the dealer can, under TSB EG013R-04, replace the catalytic converter and, in some cases, recalibrate the engine computer.

Some early 2005 Camrys may have broken or hard-opening console storage box doors; these can be replaced by the dealer as well. The new part number is the same as the old one.

Matt Yi wrote that, on the 1989 V6 Camry, “you can get at the front three plug easy but the back three plugs were a royal pain to get at. With the right extensions, u-joints, and some patience - you can work them out. I found it easier to pull the intake plenum and work from there. Even then, it was a pretty tight fit. That's probably why Toyota put in platinum tipped plugs - since they are so hard to take out.”

To get to the plugs -

1. Remove the intake plenum and fuel rail (depending on model-could work around it), relieve fuel pressure in system (fuel injection fuse) and use a rag to catch fuel spray as you remove fuel feed to plenum, EGR, and misc piping. Be careful of the intake plenum and EGR as they can be easily dented or twisted out of shape. Need to replace plenum gasket and fuel fitting gaskets. If you removed fuel rail - need the o-rings for that as well. [Editor’s note: you may want to get a very clean container to catch the fuel, because there is often a lot of it. Be careful relieving the fuel pressure in the system; read a manual.]

2. Use some extensions and a u-joint with a 3/8" ratchet and work your arm around the intake plenum. I believe I used a 2" or 4" extension, u-joint, and a 6" or 8" extension to 3/8" ratchet. You can get two plugs out from the driver's side - the other has to come out of the side. But I did this years ago. Be nice if you are flexible and have thinner/longer arms.

In either method I would highly recommend that you:

Taking off the door panels

“willit_fixit” and Matt Yi discussed this on the forums:

Remove three screws from the door panel and pop the clips along the bottom edge, front edge, and rear edge of the door panel. There is a plastic cover that is in the rear corner of the window that sits on top of the sill formed by the door panel; the plastic cover should slide up and out. Try prying on the bottom edge of the cover with the flat end of trim tool wrapped in some cloth or a putty knife. If it does budge - try putting some upward and inward pressure to pop the clip out. That should give you enough room to hinge out the panel and remove it from the window channel. Don't give up - some clips can be pretty stubborn. That's why the cars stay relatively rattle free and why most rattles are produced after some trim has been removed, ie. aftermarket radio install or security system. When the plastic cover is out, lift up the panel and carefully take it out (after having disconnected all the electrical wires.)

Toyota Camry specifications are after these links...

* Sedan, except as noted ** 20/29 is with fuzzy-logic automatic - note huge gas mileage gainw