The best selling sedan in America, the Toyota Camry, started to show the results of cost-cutting as it lagged behind competitors in critical reviews. The eighth generation was engineered to put the Camry back on top.

Toyota has a new global architecture, tubbed TNGA (Toyota New Global Architecture), which in this case is shared with (among others) the Corolla, Avalon, and Lexus ES. One goal was to make the car more fun to drive; with its new powertrain and suspension tuning, the 2018-2023 Camry easily surpassed its predecessor. Another goal was lowering the center of gravity, and another was making the cabin more exciting, while keeping it practical.

The new two-piece grille, with flowing thin and thick treatments, is part of the “Keen Look” design. The hood is 1.6 inches lower; hybrids have a blue-tinged emblem. The seats’ hip points are lower (0.8 inches in the front and 1.2 inches in the rear), which allowed the roof to drop down an inch.

The Camry has five grades — L, LE, XLE, SE, and XSE; the SE and XSE are sportier, and have a sculpted rocker panel, 19-inch black machined-finish alloy wheels (optional on SE), a rear spoiler lip, altered front and rear bumpers, and rear bumper with a lower diffuser. Large side intakes flank the lower bumper, with a gloss black mesh grille between.

The interior was redesigned, not just for a sporty feel (gauges are angled towards the driver) or for openness, but to integrate electronics and controls better. The front and rear seats were dramatically improved in comfort and appearance. There are three different displays: a ten-inch heads-up display, a seven-inch gauge cluster screen, and an eight-inch center screen mounted flush into the console.

The new Camry has probably been more successful than any other car in integrating a big center screen.

The old rear suspension has been replaced by a new double wishbone design, for far better cornering and ride. An old aftermarket trick, a front suspension tower brace, is standard, using a closed cross-section construction; in back, a new rear body frame of annular construction enhances structural rigidity, with extra braces in the rear suspension to withstand greater lateral force.

Toyota incorporated new noise, vibration, and harshness (NVH) countermeasures, including a hood insulator, upper and lower fender separators, foam/vibration dampening materials throughout the car, a thicker dash silencer mat, and a vibration-damping coating applied over a wider area of the underfloor, joined by noise-proofing material across more of the interior’s ceiling. Wind noise was suppressed through a redesigned rain gutter molding and a reduction in the step at the bottom of the windshield. Visibility was also increased in all directions.

The old four-cylinder has been upgraded and dubbed “Dynamic Force;”  the V6 has been upgraded; and the six-speed transmission has been replaced by an eight-speed with a far greater range, both improving launches and providing better fuel economy and lower noise. 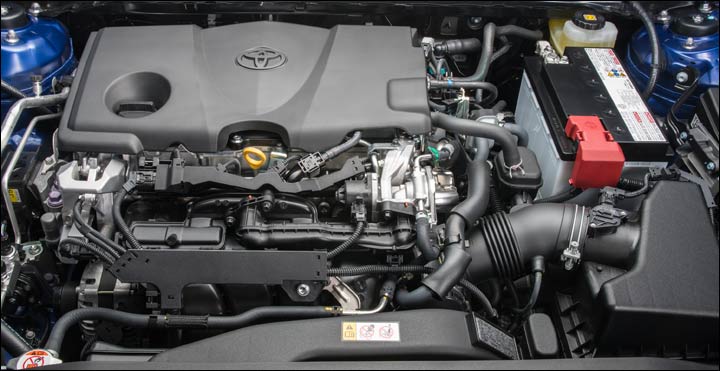 Direct injection, a high compression ratio, variable cooling, and multi-hole injectors all increase the four-cylinder engine’s efficiency, while the long stroke helps with low-end torque. A new VVT-iE system, electric-motor-controlled intelligent variable valve timing, is on the intake side; the exhaust uses hydraulically controlled intelligent variable valve timing (the electric motor on the intake side is to help with cold temperatures or low engine speeds). The bore is the same as the prior generation, with the stroke lengthened from 3.68 to 4.07 inches.

In addition to the high-pressure direct fuel injection system, the car has low-pressure port fuel injection; the choice varies based on operating conditions. The engine has a variable oil pump and cooled EGR.

The 3.5 liter V6 also has the D-4S direct injection system, and a new wide-range VVT-iW intelligent variable valve timing system which allows the car to switch to an Atkinson cycle as needed. Gas mileage is up by 8% thanks to the engine improvements and transmission change.

The updated Toyota Hybrid System (THS II) has a new “Sequential Shiftmatic” system that lets the continuously-variable transmission (CVT) mimick a six-speed automatic, with driver overrides via paddle shifters (on SE grade) or with the console-mounted shift lever. Combined gas mileage rose by 21%. There are two electric motors, both of which can be used to recharge the battery when coasting or braking.

The 2018 Camry Hybrid LE has a Lithium-ion (Li-Ion) battery pack; the SE and XLE have a Nickel-Metal Hydride (Ni-MH) battery pack.

The battery moved from the trunk to under the rear seat, lowering the center of gravity slightly. The engine computer is lighter and more compact, with a new power stack structure, so it can be placed above the transaxle. The DC voltage converter was updated for less waste, smaller size, and less noise.

There are four drive modes — normal, economy, electric-only, and a new Sport mode which brings a more sensitive throttle response. There is also a new Auto Glide Control (AGC), which makes coasting more efficient. Under normal driving, engine braking slows the car down when the driver lifts off from the accelerator pedal; the new AGC limits the loss of speed through an automatic drive setting that acts more like a neutral gear, allowing the car to coast to a stoplight. It is only used in the Economy mode.

Toyota has quickly been making key safety systems standard. On the Camry, this includes: 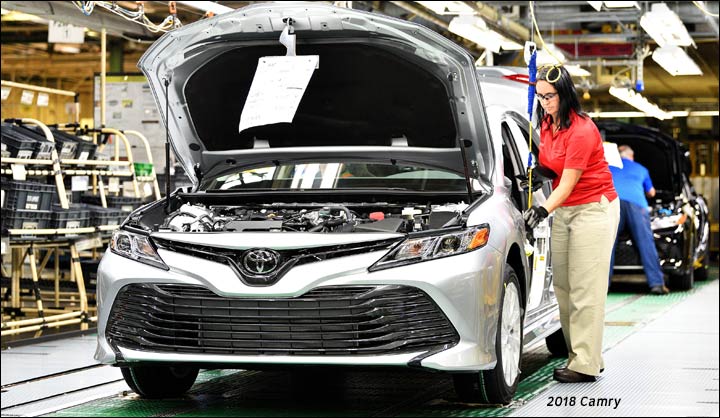 Higher trim levels come with a blind spot monitor and rear cross traffic alert for backing up safely when you can’t see to either side (using bumper sensors). The optional intelligent clearance sonar includes rear cross-traffic braking, too.

The new Toyota EntuneTM 3.0 multimedia system has navigation and apps, but remains a bit primitive when shopped against most competitors. The four-cylinder cars come with Connected Navigation GPS Link with Moving Maps, and the V6 has the more-accurate Dynamic Navigation system with over-the-air map updates (including local details).

Over ten million Camrys have been sold in the United States; the Camry has been the best selling sedan in America for 15 consecutive years.