The emphasis on the 2002 redesign was to make the Camry more exciting, now that it has established a rock-solid reputation for value and quality. As best selling car in America, the Camry has earned a place in the hearts of North Americans - though it is not especially popular in Japan due to its "large" size.

Now in its fifth generation, the Toyota Camry rides on its first all-new platform in ten years. Roomier, quieter and more powerful, it has crisper handling and, believe it or not, improved ride comfort.

The new platform is wider and taller, with a two-inch-longer wheelbase. There is more rear legroom and less drag - now .284, or "extremely slippery." 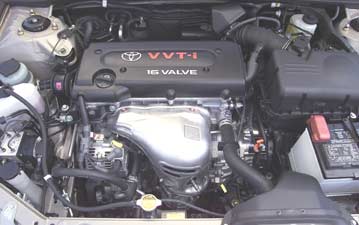 Fuel economy is also improved with preliminary EPA city/highway gas mileage of 23/32 mpg with the four-speed automatic transmission and 24/33 mpg with the five-speed manual (that's similar mileage as the Dodge Neon and Mitsubishi Lancer). In addition to the added power, the new engine is EPA-certified as an Ultra Low Emission Vehicle (ULEV).

Optional is an all-new smooth shifting electronically controlled four-speed automatic overdrive transmission with intelligence (4ECT-i). A five-speed manual overdrive transmission is available with four-cylinder LE and SE models. Preliminary zero-to-60 performance for the V6 is 8.3 seconds, an improvement by nearly half a second. Zero-to-60 performance for the new four-cylinder engine is improved by over one second with the manual transmission clocked at 9.1 seconds, 9.9 for the automatic. Unfortunately, appears that the V6/manual transmission option is no longer available for those who like "sleepers." However, the SE model does have an optional 225 horsepower 3.3 liter V6.

All V6, SE, and XLE models will be equipped with four-wheel disc brakes, while the four-cylinder LE model offers discs in the front and drums in the rear.

The chassis is controlled by power-assist rack and pinion steering. All LE models come standard with 205/65R15 tires. The XLE and SE models will ride on standard 215/60R16 tires. All models offer optional aluminum alloy wheels.

The front suspension is equipped with MacPherson struts that feature noise, vibration and harshness (NVH) reduction through the use of springs and shocks with separate upper bearing points on the inner fender which reduces the noise to the body shell. Additionally, anti-roll bar end-links are coupled to the strut housings, rather than the lower control arm, for increased control of body roll without excessive ride harshness. The rear suspension is equipped with Chapman struts, with very long lower control arms to minimize camber change during body roll.

Further NVH reduction and improved body rigidity is accomplished through the use of structural adhesives and spot welding in strategic locations. In addition, foam is utilized in the A, B, and C pillars to reduce wind noise. Additional body structures to reduce NVH include cowl stiffeners and asphalt sheeting, curved panels in the floor, and stiffeners across the rear parcel tray, under the rear seats and in the spare tire well.

The larger wheelbase allowed Toyota engineers the opportunity to create a more spacious and inviting cabin. The newly styled front seats now offer greater lumbar support and a greater range of seating positions for added comfort while the rear features 60/40 fold-down seats for storage of larger items such as skis, and L-shaped headrests that provide added rear visibility for the driver. Fabric upholstery is offered in LE and XLE grades with an aggressive fabric design in the SE grade. For an added dose of luxury, leather trim is available in all XLE grades and the SE V6.

A high performance fold out in-dash DVD navigation system is available on XLE and SE. The GPS system features a multiple language LCD touch-screen display panel and voice navigation that is fully integrated with Camry’s body of electronics. With a map-scrolling speed of 600 dots per second, and a route calculation time of 5.0 seconds, the Camry navigation system is the faster than all of its competitors in the U.S. market. Additional features include a dual map screen display, multiple route options whereby three routes (quick, short, and alternative) are calculated for different driving conditions, route previews, areas to avoid, and pictograms of selected intersections with routes highlighted. The driver can also specify a route that allows or avoids road types such as freeways, toll roads, and ferries.

A newly designed instrumentation panel integrates the fuel and temperature gauges into the speedometer and tachometer, delivering a three-dimensional, high-tech look. A silver metal background on the IP of the SE grade conveys a more aggressive attitude.

Convenience is enhanced with a multitude of storage compartments and cup holders strategically located in the front center console and rear armrest. Additionally, all Camry’s are equipped with standard intermittent windshield wipers that now feature a new washer nozzle that provides a broad, more uniform spray pattern without temporarily obscuring the driver’s vision.

Three distinctly different model-grades based more on buyer tastes than on buyer wallets broaden the Camry's appeal, while helping to dispel some of the "generica" feel of some predecessors.

The entry-level "stripper" CE is gone, replaced by the LE, which was the most popular model. A luxury oriented XLE has less of a price gap from the LE. A new SE model has chassis tuning and appearance changes for more sportiness.

Standard on the XLE, optional on the LE and SE:

The SE adds to the LE:

Additional options include a power tilt and slide moonroof on all models, and heated front driver and passenger seats (XLE and SE V6 models only).

Available on all Camry models for 2002 are front and rear passenger side curtain-shield SRS airbags. Coupled with the front seat-mounted SRS side impact airbags, the side curtain shield airbag system is designed to help protect the head of front- and rear-seat occupants and the torso of front-seat occupants in side impacts. The single side curtain-shield system inflators, located below each C pillar, and the individual seat-mounted inflators are triggered separately, from the left and right sides, based on impact sensors located in the base of the B pillar. The system is designed to help prevent direct contact with the body pillars and side glass in the event of a side impact.

Front airbag deployment is now controlled in multiple stages based strictly on the severity of the impact measured by front impact sensors. The driver side airbag is controlled in a three-stage manner based on impact severity and the position of the driver seat. A seat position sensor judges the size of the occupant based on the seat position. The driver-side airbag will deploy at a faster rate (high stage) or slower rate (low stage) for medium and large size occupants, depending on impact severity. The driver-side airbag will deploy at low stage, or extra-low stage for smaller occupants, depending on impact severity.

Front-passenger airbag deployment is controlled in two stages based on the severity of the impact measured by front impact sensors. This provides either a "faster" or a "slower" deployment as deemed appropriate.

For added comfort, convenience and safety, the 2002 Camry will feature new power adjustable floor pedals later in the model year. The brake and accelerator pedals now adjust forward and back automatically at the touch of a button located on the lower left instrument panel. This allows smaller drivers to comfortably position their seats relative to the steering wheel while their feet maintain sufficient reach to the floor pedals.

Frontal, offset-frontal, and side impact protection has been enhanced with the installation of pre-cut steel panels of varying thickness. The panels are designed to create crumple zones that buckle to absorb impacts, while helping to minimize deformation of the passenger compartment. A reinforced upper cabin frame, reinforced rocker support of all four window pillars, as well as side impact door beams, help to maintain cabin integrity during a collision.

Inside, lower limb protection has been enhanced with the adoption of an anti-intrusion brake pedal that moves inward during impact, and a crushable foot rest that deforms during impact, providing more cabin space for feet and legs.

Four-wheel ABS with Electronic Brake Distribution (EBD) is standard on XLE four-cylinder and all V6 models, and optional on LE and SE four-cylinder grades. While ABS helps prevent the wheels from locking during severe braking conditions, EBD detects the differences in front- and rear-wheel speeds and dispenses the proper braking force to all four wheels.

Toyota’s 36-month/36,000 mile basic new-vehicle warranty applies to all components other than normal wear and maintenance items. Additional 60-month warranties cover powertrain for 60,000 miles and corrosion with no mileage limitation. Toyota dealers have complete details on the limited warranty.