The Toyota Camry, the best-selling car in America four years running and eight of the past nine years, was new for 2007. Designers and engineers tried to get a more stylish, athletic, modern image, while increasing performance for both standard and hybrid models — without sacrificing traditional Camry qualities, including a comfortable ride and low noise levels. 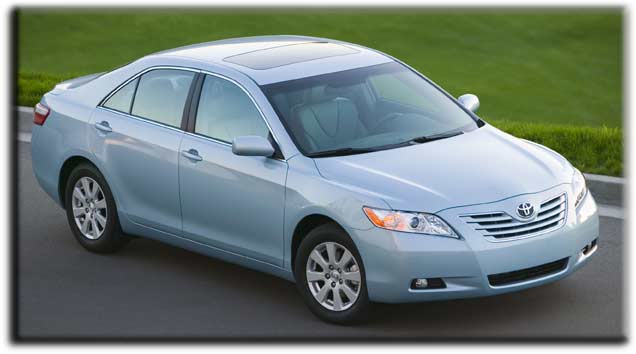 The wheelbase is longer, and the track is wider, with the wheels pushed toward the extremes of each of the car’s four corners, to increase cornering capability without stiffening the shocks. The body structure was designed to absorb collision-impact forces. High-strength steel for B-pillar and rocker panel reinforcement manages body deformation in the event of a side collision. The seat frames are designed to receive and help absorb side collision loads and a cross member in the center of the floor is used for the same reason.

While designers optimized the Camry’s visual image, they also paid attention to generating a sense of excitement in the driving experience without sacrificing ride quality. To do that, they increased wheelbase (109.3 in., up from 107.1 in.) but maintained the same overall length, with a shortened rear overhang. Even with this lengthened wheelbase, engineers delivered a reduced turning radius.

The chassis was made more rigid by connecting the cowl front to the upper suspension towers. Additionally, the Camry’s hood, fenders and their brackets, and cowl are designed to crumple and absorb impact energy. 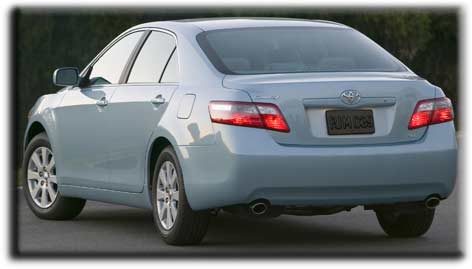 Wheels for all four Camry grades were upgraded to a sixteen inch mininum; the SE gets aluminum 17-inch wheels with six spokes, optimized for brake-heat dissipation. Brake discs were enlarged for improved feel and stopping power. Up front, ventilated 11.65-inch discs are used, with solid 11.06-inch discs at the rear. A new brake pad provides a 10% higher coefficient of friction for increased stopping power. Finally, Toyota’s Brake Assist, an electronic function that senses an emergency stop and applies increased braking power once the driver touches the brake pedal, is standard.

Front suspension is via MacPherson struts. At the rear, a dual-link strut system helps provide an optimal balance between smooth ride and secure handling. To help improve the Camry’s handling and driver feel, all lower control arms were lengthened, all spring, shock-absorber and antiroll-bar values, and all suspension geometries, were rethought and recalibrated.

The revised chassis was lab-tested using specs simulating the road surfaces in every country in which Camry is sold. Then, to add real-world verification to their new design, engineers road-tested the new suspension design for more than 600,000 miles in more than a dozen countries.

The CE gets many standard features, including a tilt and telescopic steering wheel, a six-speaker 160-watt digital AM/FM/CD audio system with an auxiliary audio jack, 16-inch wheels, seven airbags, a vehicle immobilizer, and four-wheel disc brakes. The Camry LE adds a long list of features, including an in-key remote keyless entry and eight-way-adjustable power driver’s seat. A V6 engine with dual exhausts is also available. 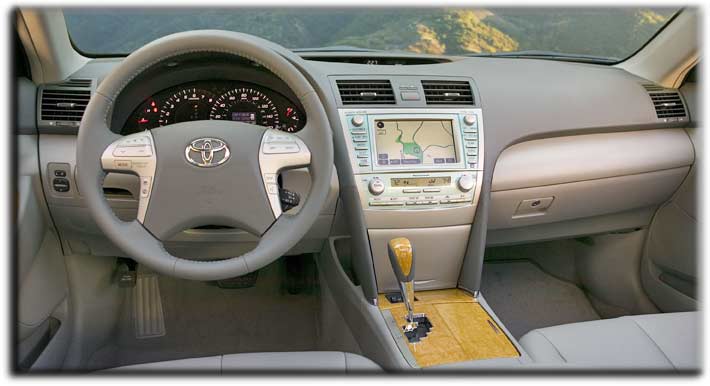 As was the case in previous years, LE and XLE use basically the same chassis specs while the SE uses springs, antiroll bars, shocks and bushings with firmer, sportier values than those used in the other two grades. But for 2007, the SE is 0.4-inches (10mm) lower, and a V-shaped brace added between the trunk and cabin, with stabilizing braces added to the underbody, increase the body’s torsional rigidity. Underbody aerodynamics were also examined, to smooth the airflow under the car, and also to increase the speed of the airflow. Engineers also carefully adjusted the balance between front and rear downforce. The result is better stability at elevated speeds.

Options available on select Camry grades (not all options are available on all Camry models!) include a tilt/slide moonroof, heated seats, voice-command DVD navigation system, leather-trimmed seating, rear spoiler, Vehicle Stability Control and a Smart Entry and Smart Start system with push-button start that allows drivers to lock, unlock, or start the car just by carrying the Smart Key on his/her person.

The team turned its attention to maximizing interior space – in particular, fore-and-aft space - without significantly enlarging the Camry’s exterior. It started by pushing the cowl, the bottom of the car’s windshield, forward for an increased sense of openness and room in the Camry’s passenger cabin. Redesigned front seats also played a role in adding a feeling of spaciousness to the Camry cabin. Seat-slide length was increased to accommodate comfortable driving positions for larger drivers and passengers. Manual seats have a range of 10 inches, and power seats offer 10.2 inches of travel. A place on which to position one’s hand for support while entering and exiting the vehicle- was added to the outboard side of each front power seat-bottom surround panel.

In an expansion of a seat technology first seen on the Toyota Prius, the Camry’s seats use Toyota’s Whiplash Injury Lessening (WIL) seat design. That means that each seat is designed to help manage whiplash injury.

Used exclusively on the top-of-the-line XLE four-cylinder model, a new standard fabric is treated by the Fraichir process. In this process, fabric is coated with a naturally occurring component called Sericin, which is extracted from silkworm cocoons and refined. This substance is used because it contains a natural moisturizing component.

The revised interior involved a complete redesign of every detail of the dash and console, in part to avoid the impression that the dash crowds the Camry’s passengers, and also to improve instrument visibility and ease use of all controls.

The dash itself uses a two-level configuration with the upper level moved toward the front of the vehicle to improve the impression of roominess.

In the instrument panel, instruments are larger than before, with larger lettering and longer needles. The speedometer is marked in five-mph increments, a step that is important to American buyers because speed limits of 55, 65 and 75 mph are very common. Additionally, the odometer and trip meters are illuminated at all times to improve daytime visibility.

Special attention was paid to the audio/HVAC control panel. The control panel features switches that are slimmer and neater than previously, with larger lettering, and with surface luminescence for easier use at night.

Designers built in many storage spaces around the front-passenger area, including console side-pockets, marking the first use of this storage option in a sedan. Storage options also include a large front console box equipped with an accessory power socket and an auxiliary audio jack - this box is big enough to store eight CD jewel cases. Other storage areas include an accessory box behind the shift lever containing another accessory power socket, a 354 square inch rear-console box with a card holder and a movable tray, and, adjacent to the shift lever, holders for two large cups.

A new HVAC system, standard on the XLE and Hybrid, incorporates automatic climate-control with separate left and right zones. This new system uses Plasmacluster ionizer technology to help reduce airborne mold spores, microbes, fungi, odors, germs and bacteria inside the passenger cabin. The plasmacluster ionizer does this by artificially creating positive and negative ions that seek out and surround harmful airborne substances.

The 2AZ-FE engine, standard across the Camry grade lineup (and now used in the Toyota Corolla), is based on the 2.4-liter four-cylinder engine from last year, but is substantially upgraded. This redesign employs optimized intake and exhaust systems, as well as strategies that reduce internal friction and enhance engine-block/crankcase rigidity. The result is improved power output with exceptional fuel economy and reduced noise and vibration levels.

This engine is based on bore/stroke dimensions of 3.48 x 3.78 inches (88.5 x 96mm) for a displacement of 2,362 cc, or 144.1 ci, and develops 158 SAE horsepower. During their revision of the existing engine, engineers boosted the compression ratio slightly to 9.8:1, altered the cam profile and paid particular attention to reducing friction through strategies such as reducing the tension of the piston rings while increasing their tensile strength. Finally, they reduced piston weight, optimized the balance shaft, improved sound insulation performance of the engine cover and improved the engine mounts. With this engine, Camry buyers have the choice of either five-speed manual or electronically operated five-speed automatic transmission.

For those looking for more power, the new 2GR-FE engine – a 24-valve, DOHC 3.5L V6 - is available in the LE, SE and XLE. This engine is designed to deliver up to 40 percent better acceleration over the 2006 model year Camry 3.3-liter V6. The V6 is based on bore/stroke measurements of 3.70 x 3.27 inches (94.0 x 83.0 mm) for a displacement of 210.9 ci, or 3,459cc, and uses a compression ratio of 10.8:1 to generate 268 SAE horsepower. The dual camshafts, which are chain-driven, employ Dual Variable Valve Timing with intelligence (Dual VVT-i) for optimal cam timing – and therefore maximum power production - at all RPM levels. 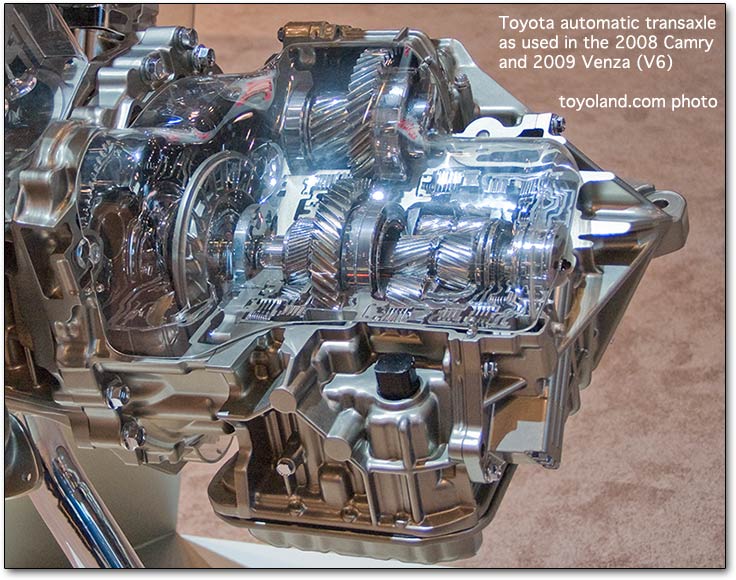 Engineers improved airflow through every element of the engine’s intake tract. This includes improving air-cleaner shapes, intake ducts and the intake manifold and cylinder head intake ports. In addition, valve openings were enlarged and exhaust pressure loss was reduced from the exhaust manifold to the muffler. Engineers modified the shape of the Camry’s taper-squish combustion chambers to make maximum use of that air. And they provided exhaust manifolds that incorporate catalytic converters for greater efficiency.

As a result of this development, transmission kickdown response was cut to 0.5 seconds, more than twice as fast as the response of the transmission this new one replaces.

The standard audio system in the 2007 Camry incorporates an AM/FM/six-disc in-dash CD changer with six speakers and uses a four-channel digital amplifier that produces 160 watts of output. Additionally, all audio systems are capable for reading CDs with MP3 files.

The premium JBL system, standard in the XLE and Hybrid, offers AM/FM/six-disc in-dash CD changer with eight speakers and an eight-channel, 440-watt digital amplifier for low distortion and faithful reproduction of a wide range of musical types and styles. When a navigation system is added, the premium JBL system integrates that system and comes with a four-disc in-dash CD changer. The JBL audio system includes Bluetooth® technology for hands-free telephone compatibility.

All 2007 Camrys come equipped with an Antilock Brake System (ABS), Electronic Brake-force Distribution (EBD), and Brake Assist; optional on some models is the Vehicle Stability Control (VSC) with traction control, which controls engine output and brake application on individual wheels to help control loss of traction in turns.

Dual-stage advanced SRS airbags are standard on all Camry models. Standard seat-mounted side airbags and side curtain airbags help provide coverage for the length of the passenger compartment. A driver’s knee airbag also is standard.

The first half of this system consists of the 2.4L four-cylinder 2AZ-FXE Atkinson-cycle engine, which generates 147 hp and is coupled to a continuously variable transmission (CVT). The second half of the Hybrid Synergy Drive equation consists of a small, specially developed electric drive motor that produces 40 horsepower, an ultra-small inverter with a specially designed compact battery and a transaxle to provide the economy and seamless performance hybrid drivers seek.

Additionally, the Camry Hybrid is equipped with an “ECO” button that limits energy consumption by the HVAC system and under certain conditions can help improve fuel economy.

Because there are situations in daily driving in which the gas engine in a Toyota hybrid is completely shut down, air-conditioning and power-steering systems are driven electrically, rather than by the engine. This ensures these features will continue to operate, whatever the status of the Camry Hybrid’s drive system.

Finally, special attention was paid to the vehicle underbody with the use of wheel spats and underbelly pans resulting in a low coefficient of aerodynamic drag (Cd) of 0.27, which helps increase fuel economy.

The 2007 Camry and Camry Hybrid are covered by Toyota’s 36-month/36,000-mile basic new-vehicle warranty that applies to all components other than normal wear and maintenance items. Additional 60-month warranties cover the powertrain for 60,000 miles and corrosion perforation with no mileage limitation.

The Camry Hybrid also has an eight-year/100,000 mile warranty that covers the hybrid–related components, including the HV battery, battery control module, hybrid control module, and inverter with converter.